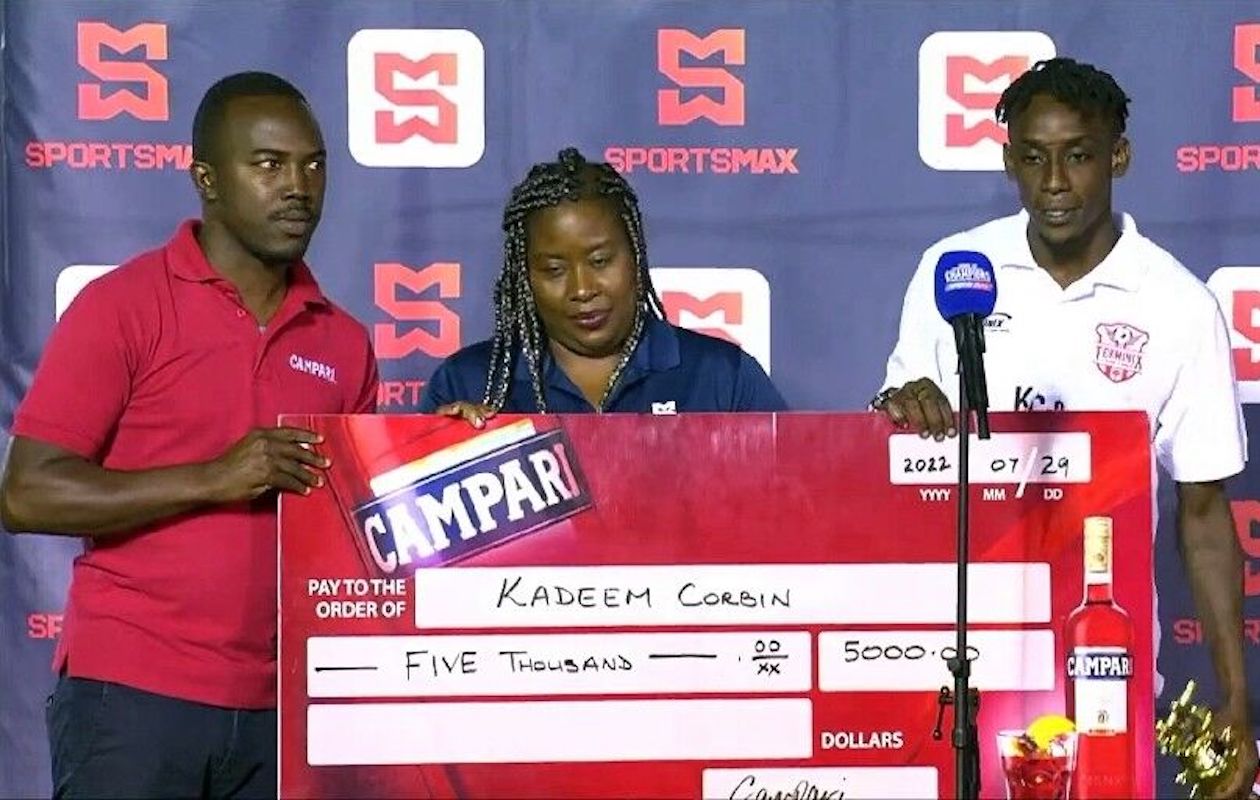 KADEEM CORBIN was named Player of the Tournament as the curtain came down on the Ascension Tournament with the final night on Friday featuring matches at the La Horquetta Recreation Ground.

Corbin was the main talking point seven years ago when Trinidad and Tobago won the Caribbean Under-17 Championship under coach Derek King. His team-mates included Neveal Hackshaw, Jabari Mitchell, Kevon Goddard, Shannon Gomez (captain), Matheion Watson, Jesus Perez, Kurt Seecharan, Akim Andrews and Nicholas Dillon, some of whom have gone on to the senior men’s national team or have established themselves in local football.

Corbin himself has had just one senior cap, coming against Curaçao, seven years ago at that high point in his career. Now a 26-year-old, Corbin makes no apologies about his desire to earn selection onto T&T’s senior team once more.

“I just wanted to send a message,” stated Corbin, when collecting his $5,000 prize after being named Campari Player of the Tournament.

The former St Ann’s Rangers and Central FC forward scored 11 goals this season, finishing third on the goal-scorers list which was led by Brent Sam (16), Ataulla Guerra (15) and Jameel Boastwain (11). Corbin scored twice on Friday night as Team of the Year Terminix La Horquetta Rangers whipped Cunupia FC 7-1 to end the season unbeaten in 18 matches, having already won the tournament and the $100,000 champions prize two weeks ago.

Playing the early match on Friday, Rangers led 5-0 at half-time. They got a hat-trick from Guerra, two from Corbin and a goal apiece from Tyronne Charles and Daniel David, while Josiah Daniel got Cunupia on the scoresheet.

With many of his goals coming at crucial times throughout the season, Corbin explained that he had worked hard in pre-season.

“I was really working on getting it (the ball into the back of the net),” Corbin stated. “As you can see, the tournament come by and I keep on getting it, and it come like art.”

Sam notched his 16th goal of the season on Friday night, getting the winner as Defence Force edged a tough Armed forces Derby 2-1 over Police FC and won $50,000 for ending the season in second spot. Police ended third and won $25,000.

Sam’s winner separated him from Guerra who had joined him on 15 goals, after scoring his hat-trick earlier in the night. The Forces derby was a torrid one which saw both teams having a player sent off.

Defender Rakhim Cabie was first to the showers, dismissed by referee Kwinsi Williams when taking down Sam from behind at the edge of the penalty area, with the striker on a clear path to goal. Jelani Felix then swept the resulting free-kick wide of goalkeeper Adrian Foncette and suddenly Defence Force were leading a tense derby by a 1-0 margin in the 27th minute.

Playing behind the La Horquetta Police station, the “Lawmen” seemed to draw on their reserves of strength, took the attack to the Army and were soon level at 1-1 despite being down a player.

The dead ball gave Police a way back. Jabari Mitchell’s free kick at the edge of the penalty area looked headed to the top corner of the net until a flying save saw Army keeper Aaron Enill touch the ball away for a corner. The resulting Mitchell corner was whipped across and redirected to Kadeem Hutchinson who stabbed in the ball for a 34th minute equaliser.

Sam’s winner also came from a corner, the ball not cleared until coming to Sam whose low shot to the corner gave Defence Force a 2-1 lead in the 65th minute. It was obviously a big moment for Defence Force head coach Lloyd Andrew, who along with his assistant Hutson Charles, also led Defence Force to the 2020 TT Pro League title.

Having begun his coaching career near three decades ago with La Horquetta Dazzlers at the same La Horquetta Recreation Ground, Andrews credited the “determination” of his Defence Force footballers as the reason for winning a very tough match and admitted that Sam’s winning goal might have soothed some nerves.

“When the second goal scored, it was like yes, it was a short time (to go) again,” stated Andrews. “Short time after, referee say that’s it.”