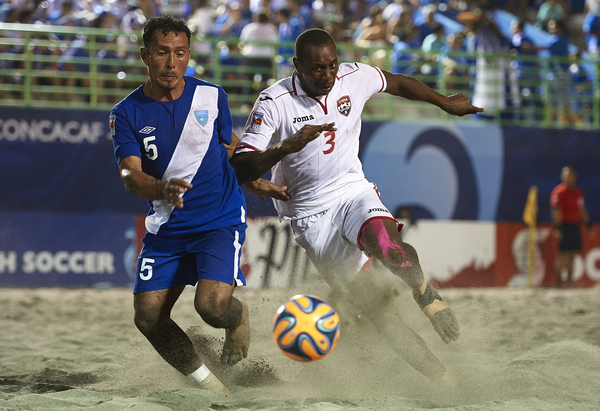 In a do-or-die fifth place match, Guatemala came out eh more determined side, however, their hunger did not equate to an instant goal like they had hoped. Trinidad and Tobago became renowned for their tenacity in this event and they displayed that like a lion showing his mane for all the world to see, but both sides headed into the final minutes without a goal. The goalless drought abruptly ended when Coker scored for the Soca Warriors putting the score at 1-0 late in the first 12 minutes. The lead could have ballooned higher, but Los Chapines still displayed their signature defense and goalkeeping, keeping matters close. Trinidad and Tobago added a late stabbing shot from Appoo to take a 2-0 lead into the first break. The Guatemalans needed only a few minutes in the second frame to capitalize on a chance that they similarly missed in the opening frame, cutting their deficit in half to 2-1, for Trinidad and Tobago. Both squads turned up the offensive intensity, scoring again the period, but it was Trinidad and Tobago that scored twice more, making the score 4-2 going into the last period.

Los Azules y Blancos still needed to find that much more offense while trying to slow down the Soca Warriors’ offense. The Guatemalans were about to do one of those things, the latter, and the score stayed at 4-2 for Trinidad and Tobago going into the heart of the period. The Guatemalans were far from finished and scored their third goal on the day late in the period to bring the score back to a one goal difference at 4-3 for Trinidad and Tobago. Guatemala could not get any close and a last second bicycle that looked to be the equalizer and the goal of tournament did not fall the Trinidad finished up 4-3.