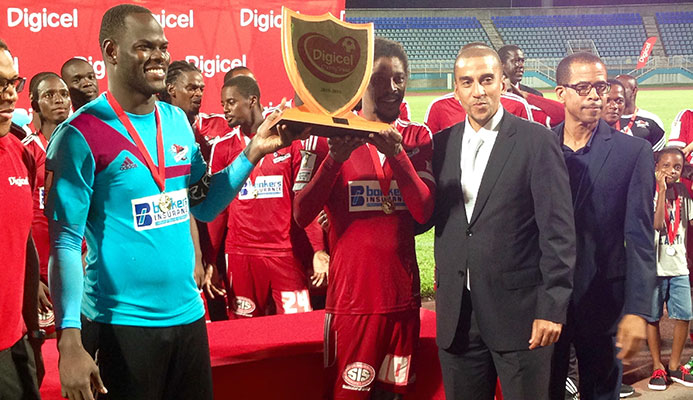 The win handed Central, last season’s seven-title winners, their first ever Charity Shield by defeating the side that edged them by the same 1-0 score in last season’s season opening edition.It was also retribution for new Central FC coach Ross Russell, celebrating victory against the same side that defeated his then club, Defence Force, 2-0 and 4-2 in the 2012 and 2013 Charity Shield, respectively.“I feel honoured,” Russell told ttproleague.com following the match. “I made it to the Charity Shield twice before and lost. Now I have won it over the same club that beat me twice. I am confident now to go forward and do my job.“I’ve adopted a winning team that won four major titles last season but lost this one. Now it’s good that the players came back this season to win it.”Russell also made it into the history books of Central FC by kicking off his tenue with a title in his very first domestic match as coach of the “Couva Sharks” while becoming the only coach to avoid defeat in his first “Couva Clasico” against rival club W Connection – something previous Central FC coaches Graham Rix, Terry Fenwick and Zoran Vranes were unable to achieve. Fenwick and Vranes were present at the Couva venue and witnessed Russell’s win.Central won four major titles (First Citizens Cup, Digicel Pro League, Caribbean Club Championship and Digicel Pro Bowl) and the Rawle Fletcher, Akeem Adams and Kevon Carter trophies for winning each round of the league and now their title ways have rolled over on the domestic front at the start of the 2015/2016 season.W Connection were stunned in the 69th minute and Central celebrated a 1-0 lead from an unlikely source in a starting line-up that included forwards Willis Plaza and Marcus Joseph and attacking midfielder Ataulla Guerra.The 25-year-old defender Ettienne, one of Central’s top preseason signings, took time in calibrating himself before spanking a low strike from the top of a crowded box to find goalkeeper Julani Archibald’s bottom right corner following a right side corner swung in by substitute Jason Marcano.“Since Ettienne arrived at the club he has been brilliant,” a proud Russell explained. “He is a great striker of the ball and tonight he had a go at it and he scored. I am very happy for him. He got MVP of the match and it’s another good boost on his head. A new boy coming to the club and he is already winning stuff.”Ettienne, the eventual Man of the Match for his solid defending and of course the goal, and Joseph both made a switch from their hometown club Point Fortin Civic to join the defending League champions ahead of the ongoing CONCACAF Champions League group stage.Connection, who had two decent attempts in the opening moments, had an excellent opportunity to take the lead in the 24th minute after midfielder Jomal Williams was tripped in the Central box by Kaydion Gabriel, forcing match referee Rodphin Harris to point to the spot.However defender and captain Alvin Jones struck over from the penalty spot, failing to trouble Central goalkeeper Jan-Michael Williams, who had to make two stops in the first half and was lucky not to concede in the 43rd minute thanks to a clearance off the line by Gabriel.Central also got close to breaking the deadlock in the first half but Archibald pulled off a fine save to put behind a Guerra free-kick on the half hour mark.Then Plaza, set free behind the defence by a classic Marvin Oliver pass, wasted his strike in the 34th minute with Archibald at his mercy. The ace Central forward struck directly at the Connection and St. Kitts/Nevis international before teammate Joseph rattled the upright from distance a minute later.Central finally found the back in the net through the former Civic captain against a Connection side that included new talented signings: forward Jhonathan Gherherdt and midfielders Briel Thomas and Kevon Goddard.Both sides kept pressing on either end, however Ettienne’s strike stood the valuable winner.Russell concluded, “The contest was a good one. Both teams were suffering for a win having lost our (opening) Concacaf Champions League games. It was a matter of getting on top and winning the game as we look forward to the new (domestic) season.”Central and Connection will refocus on the for their second leg matches of the 2015/2016 Concacaf Champions League before the start of the 2015/2016 Digicel Pro League later this month.Connection will tackle Saprissa of Costa Rica on 16 September before wrapping up their Group A fixtures against Mexico’s Santos Laguna on 22 September. While Central must host Guatemala’s Comunicaciones on 17 September then LA Galaxy of the United States on 23 September to complete their Group D fixtures. All matches are hosted at the Hasely Crawford Stadium in Port of Spain.Digicel Charity Shield 2015Central FC 1 (Andre Ettienne 67’) vs W Connection 0TeamsCentral FC: 21.Jan-Michael Williams (C); 2.Elton John, 4.Andre Ettienne, 10.Marvin Oliver, 11.Darren Mitchell (14.Nicholas Dillon 85th), 12.Jamal Jack, 15.Kaydion Gabriel, 24.Kevon Villaroel, 33.Willis Plaza (Yellow Card) (26.Mickaeel Jem Gordon 89th), 45.Ataullah Guerra (19.Nathaniel Garcia 79th), 99.Marcus Joseph (7.Jason Marcano 65th)Unused substitutes: 6.Kerry Baptiste, 30.Akel Clarke (GK), 17.Marcelle FrancoisCoach: Ross RussellW Connection: 18.Julani Archibald; 2.Kurt Frederick, 3.Gerard Williams, 4.Maurice Ford, 8.Breil Thomas (23.Kevon Goddard 57th), 10.Jomal Williams, 12.Dimitrie Apai (17.Aikim Andrews 56th), 16.Alvin Jones (C), 21.Shannon Gomez, 48.Stiven Lopez Concha (34.Jabari Mitchell 46th), 27. Jhonathan Gherherdt (11.Neil Benjamin Jr. 68th)Unused substitutes: 1.Terrence Lewis (GK),  5.Triston Hodge, 13.Kion Joseph, 35.Keston Julien, 46.Anfernee Frederick  Coach: Stuart Charles FevrierMatch OfficialsReferee: Rodphin HarrisAssistant Referee 1: Ainsley RochardAssistant Referee 2: Joseph BertrandFourth Official: Cecile HindsMatch Commissioner: Wayne Caesar