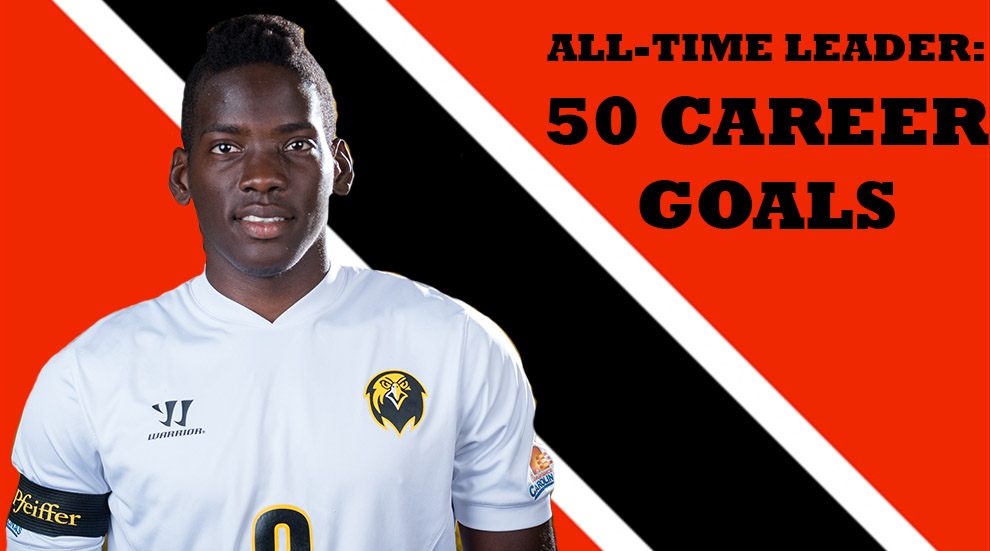 Nathan Regis' historic goal in the 86th minute broke a 37 year old record for most career scores as the tally gave Regis 50 strikes in 56 career matches and led the No. 1 Falcons (16-0) past Catawba (5-10), 4-1. Regis has the rest of this season and his senior year to make sure his record stands for at least 37 years.

"I couldn't do it without the commitment and fellowship of the team," commented Regis following the match. "It's a strike's sole duty to shoot and, in doing so, I have been able to score. Persistency always beats talent."

Robert Hinch scored his 49th and final career goal in 1978 and no one has been within 10 strikes of that total until Regis donned a Pfeiffer jersey. The Trinidad & Tobago native recorded 10 goals as a freshman and followed that with 19 tallies a season ago. Tonight, Regis notched his 21st goal of the season, leaving him one shy of tying David Smith's 1965 record for most goals in a single season.

Martim Galvao finished the contest with a goal and an assist for Pfeiffer who moves to within one win of a perfect regular season. Cristobal Allendes and Santi Moar each had a goal and Alex Stoiljkovic was credited with the assist on Regis' record breaker.

Tomas Correa moved to 7-0 in goal as the freshman made one save. Pfeiffer dominated the contest and outshot Catawba 27-5 on the evening, while taking a 9-1 advantage in corner kicks.

"You have to give credit to Catawba, they played very hard tonight," said head coach Bob Reasso. "That's how it goes when you are playing against a local team. I thought we could have scored a few more goals and made it a more comfortable win. On the whole, we will take the win and move on."

The Falcons look to finish the undefeated regular season with a matchup at Southern Wesleyan on Saturday at 3 p.m. The Warriors have a 9-4-1 overall record and are 4-3-1 in Conference Carolinas action. Pfeiffer can tie the record of 17 wins in a season with a victory on Saturday and are the only Division II team without a loss or a tie on the year.