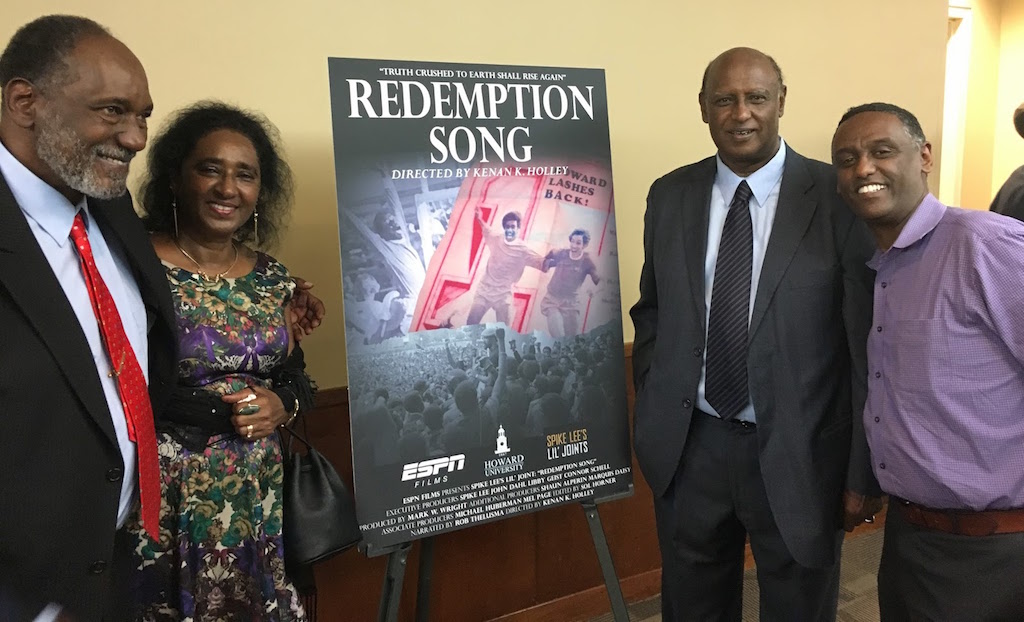 Even though we had just made history — having etched Howard University’s name in the history books as the first historically black college to capture a Division I NCAA championship — the feeling I had swirling around my head was the journey taken that led to the accomplishment. Even as our players celebrated in the locker room — dancing, crying and hugging — all I could think about was the process and the end result. That’s the coach in me, I suppose. It was about the collective growth.

We knew, in our hearts, that we had won the 1971 championship — over this same St. Louis team — fair and square; we knew that we had been here before. We had to come back three short years later and claim what was rightfully ours. We had persevered. My emotions then, and even today — 42 years later — were of relief and of course, redemption.

In the moments after that 1974 championship, there were other moments of reflection. I don’t know what would have happened had we lost that game versus St. Louis, the perennial soccer powerhouse at the time, and our biggest rival. Our whole lives depended on it. Remember, this was 1974 — smack in the middle of post-civil rights movement America, the Vietnam War still fresh in our minds and racial tensions as thick and tense and unpredictable as they are today. To think that four decades after our epic triumph, we have only made baby steps with race relations in America.

We knew at the time that Howard University was creating a template for winning and for success — not only for historically black colleges and universities (HBCUs), but for the game of soccer in America. We had made recruiting players from Africa and the Caribbean the norm — at a time when nobody looked beyond their state lines for players. We had created an opportunity for international students; not only was America an option for an education, they could also play the game they loved. We also had a sprinkling of African-Americans gravitating to the game, and there was a sense that momentum was being built. Sadly, though, that momentum was quickly halted.

Other schools, predominantly white institutions, were watching us from afar and had started to copy the template we had established. Clemson University, a perennial powerhouse, was first. In 1971, we played them at Howard and beat them handily. In that game, they had one black player on their roster. When we played them again in 1972 — this time at their place — and the bus pulled up, I saw one white player. The rest were black — from throughout Africa and the West Indies. I was shocked. I remember I said to their coach, I.M. Ibrahim, “Coach, what did you do to your players? Did you paint them?” After we won our championship in 1974, one of our key players — in fact, the player who scored the championship-winning goal, Nigerian Onyibo Ilodigwe — defected and went to Clemson.

By 1976, they’d beat us in the quarterfinals of the NCAA tournament. By that time, they had added other top-class Nigerians. The game had truly changed for us; players we typically recruited saw what PWIs [predominantly white institutions] had: pristine locker rooms, and first-class facilities and more money. HBCUs couldn’t win that race. So when I look at the landscape of HBCUs today, I am both discouraged and disappointed. Discouraged that among the 107 HBCUs across the country, only 32 have varsity men’s soccer programs. Discouraged that we never took control of our own destiny to come together to form a movement to grow soccer in America.

The question has been asked, certainly after the release of the Redemption Song movie: Why didn’t Howard grow into a perennial soccer power after its 1974 championship? We still had strong teams, but the pool of players had shrunk, for starters, and African-Americans as a whole never gravitated toward the sport on a grassroots level.

I don’t blame those players for exercising their right to play where they want; I blame us for not having the foresight or perhaps even being indifferent. We still have a colonial mentality and it is time to change that narrative. Look to ourselves for validation and stop looking to others to be told what we are capable of doing.

You see that happening in the Caribbean and in Africa and it places a terrible blight on the opportunities for black coaches who have the capacity to be just as good or better than coaches we celebrate today. Who do you think developed many of these African and Caribbean players who are playing all over Europe today? Black coaches. But when our national teams are looking for a coach, who typically gets that top job? Largely European coaches.

I also hold us partly responsible for our situation — for soccer not being considered a major sport in the United States, and as a result, well positioned to be a big part of the solution. Yes, money continues to be an issue, too, but there are several HBCUs that want to build respectable soccer programs, but don’t have the foundation or support. Several have club soccer, which you’d hope would morph into varsity programs, but that can’t happen until we form a strong fraternity that makes it a priority.

Yes, I realize many HBCUs face challenges that endanger their very existence. However, I believe the future for HBCUs will be shaped by the enrollment of international students, and soccer can be used as an effective tool to raise the international visibility of HBCUs. When I started the Black Coaches Association in 1988, that was our first attempt at coming together in a unified way. But, sadly, many coaches — even prospective coaches — are afraid to join the organization, hesitant to align themselves with a perceived “radical” movement that may alienate them or put a spotlight on them in a negative way.

It is a bit of a plantation mentality. But there comes a time when all the black coaches have to come together in order to advocate for the issues that impact us disproportionately. It is a level of consciousness that should not only aspire to create more opportunities but to also create, both collectively and individually, a culture of excellence that it will become more difficult for institutions to overlook.

We have to get rid of some of our own baggage and stop at merely acknowledging and vocalizing about the problems and challenges that exist for us as a people; that’s what happened at Howard. We didn’t look at ourselves as victims when we lost in 1971. We simply went back and focused on getting better and going out there and demanded success. This approach, of course, does not absolve those who have created an unwelcome or unfavorable climate. However, the elixir for that ailment that we call racism is to be better and help others be better as well.

Howard’s championship — still the only Division I championship at an HBCU, in any sport — was 42 long years ago. If we are to really move to the next level, and develop our own Messi and Ronaldo, we have to get back to making the sport a priority, developing the game at the youth level and reopening the lines of communication with Caribbean and African players. It’s time for us to be proud again and point to successful soccer programs on both the men’s and women’s side at HBCUs.

In my view, such an endeavor will pull more people into the sport and the ultimate beneficiary will be America. This has to happen, and it starts with a concerted and collective effort, from the grassroots level through high school and college, to start that paradigm shift. It is a challenge I place in front of not only HBCUs, but also U.S. soccer.