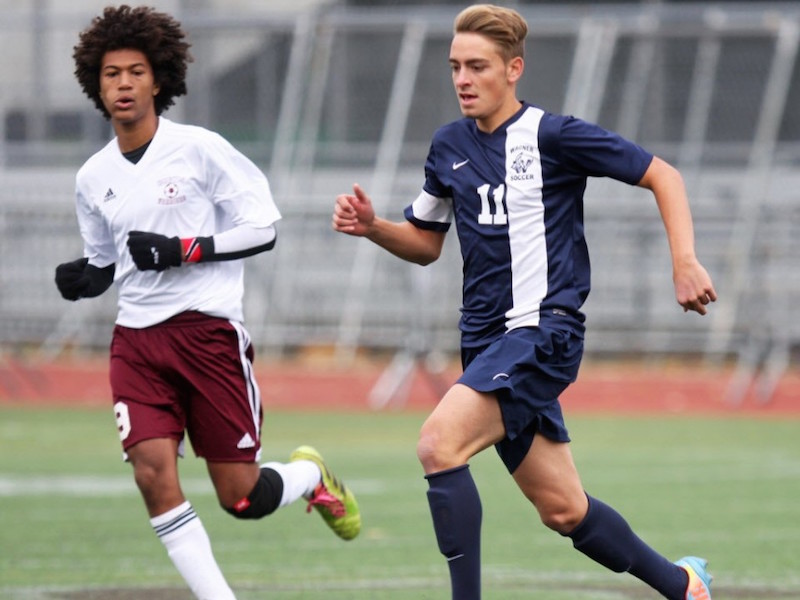 Curtis High School center defender Ian Blugh was presented with a unique opportunity that will help jump start his college career as a soccer player.

And, thanks in part to the approval of the St. George school's administration, he's taking advantage of it.

Blugh, who's in the midst of a solid season for the Warriors, will graduate from Curtis in January, thus opening the door for him to start training with Iona College's soccer team in the spring.

The senior, who plans to sign a national letter of intent to attend the NCAA Division 1 school on a partial athletic, partial academic scholarship this winter, said his academic workload has substantially increased now, but it's well worth it.

"I have the chance to go (to Iona) in the spring and start training with the team early (for next season),'' said the 17-year-old Blugh, who has helped the Warriors to a 5-3-0 PSAL record this season. "I have to double up on everything and do two on-line courses to get to graduate in January, but I received approval (from Curtis' administration) and all of my grades are 90 and above, so everything should be fine.''

Blugh said he plans to give himself a head start academically by taking classes in the spring. Blugh, who was told by former Curtis' boys' soccer coach Joyce Simonson that he's the first Curtis player to play division 1, believes he's in a good situation.

"I'm going to miss my friends a lot, no doubt, but this is a huge advantage for me,'' said Blugh. "I'm getting trained earlier and I'm getting more time to get physically fit. I'll be going up against guys 3-4 years older than me, so the extra time is huge.''

According to Blugh's father, Anthony, Iona head coach James Hamilton made his son the No. 1 recruit in his current recruiting class. In deciding to go to Iona, Blugh passed up several other interested division 1 schools, including Fairleigh Dickinson, Marist, LaFayette, Lehigh, Portland College (Ore.), Southern Methodist, Fairfield and Duquese.

Although his primary position at Curtis is center back, the versatile Blugh said he's played just about everywhere for the Warriors this season. But the St. George resident believes he'll be a holding midfielder in college, a position he often played with Brooklyn/Queens-based BW Gottschee Academy.

"I love finding open space and creating,'' said Blugh, who currently has seven goals and two assists for Curtis. "I'm really fast and quick and I'm good at winning the ball in the air, bringing it down and starting the attack.

"My passing is very good,'' he added. "I'm also solid at shooting from distance and taking free kicks.''

Blugh said Hamilton told him he's in line to start as a freshman 'if I'm ready to play.''

In the meantime, he's going to enjoy his final weeks of high school soccer as his January graduation gets closer.

"I was a little nervous in the beginning once I made the decision (to graduate early and attend Iona in the Spring),'' admitted Blugh, who's a captain at Curtis. "You can't help thinking, 'did I make the right decision,' but the more I think about it, I believe I did and I'm really happy with what i decided.''

Ian was able to go down to Trinidad and Tobago and workout with coach Brian Williams and the U-20 team for a week.

Coach Ken Elie came to see him play also and wanted to include Ian on the T&T U-17 team for the most recent tournament but he was born in Sept. 1999 which made him ineligible as he was a few months to old. Ian is still hopeful of joining the T&T U-18 team.