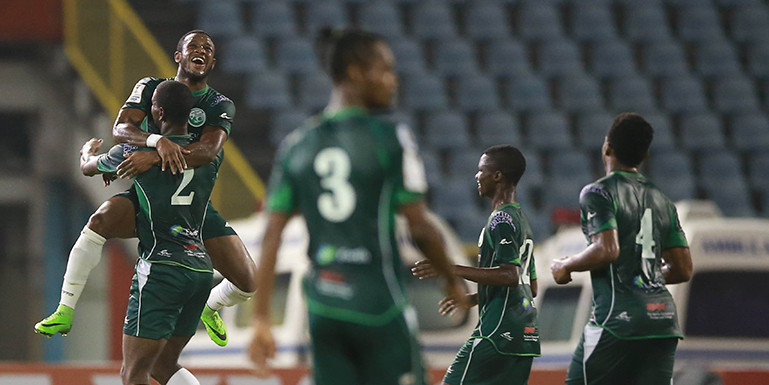 The result snapped the Savonetta Boys’ 10-game winless and five-game scoreless streaks in the tournament, while the Costa Rican power’s bid to win three straight SCCL games for the first time was dashed.Despite the setback, Saprissa (2W-0D-1L, 6 points) maintains its position atop the Group A table, while idle Santos (1W-0D-1L, 3 points) stays in second on goal difference (+3 to -7) over W Connection (1W-0D-2L, 3 points).St. Lucia international Kurt Frederick gave the host a 1-0 lead in the 34th minute with his first career SCCL goal, only for Daniel Colindres to equalize four minutes later.Saprissa emerged from the break in an attacking mood and came close to breaking the stalemate on multiple occasions. In the 53rd minute, Ariel Rodriguez’s right-footed effort from the right side of the box forced a tremendous diving save out of St. Kitts & Nevis international goalkeeper Julani Archibald.After Francisco Calvo missed in the 57th minute, Marvin Angulo crashed a shot off the post on the next play.Then, with eight minutes remaining in normal time, W Connection captain Alvin Jones struck for the game-winning goal.The victory came exactly six years to the day that an 89th minute goal by Renato Pereira gave the Trinidadian side a historic 2-2 draw against Mexico’s Pumas in the same competition.Group A play resumes on September 22, when Santos visits W Connection.ResultsW Connection  2  v  Saprissa  1Frederick 34    Colindres 38Jones 82

Jones puts the hurt on Saprissa as Connection celebrate CCL win.
ttproleague.com.Alvin Jones netted a 30-yard free-kick on Wednesday night to lift W Connection to a 2-1 win over visiting Costa Rica champions Deportivo Saprissa for the “Savonetta Boys” first win of the 2015/2016 CONCACAF Champions League.The Group A second leg result put Connection tied on 3 points with Mexico's Santos Laguna, who the “Savonetta Boys” must welcome in their final group match on Tuesday 22 September at the very same Hasely Crawford Stadium, while Saprissa’s hold on the group’s top spot isn't a guarantee.“The only thing we can do now is wait,” said Saprissa head coach Jeaustin Campos following his team’s defeat at Connection.Saprissa, who defeated Santos 2-1 in the first leg, are with 6 points (2-0-1), while Santos (1-0-1), who must travel to Trinidad next week before wrapping up the group in Mexico against visiting Saprissa on October 20, could put an entirely different spin on who advances out of the group and into the CCL quarterfinal stage.“We expected to win here (in Trinidad),” Campos confessed. “It was a good game for Saprissa (tonight). (But) it was a shame we missed a lot of chances to score. They (Connection) did and that’s it.”Connection, who suffered consecutive 4-0 defeats in their first two Group A encounters away to Santos and Saprissa, had other plans on Wednesday night.Earlier this week, Jones, the 21-year-old W Connection captain, told concacaf.com, “Being from a small island, CONCACAF is everything to us. It’s like being in a World Cup final.”Connection grabbed a 1-0 lead in the 34th minute when left-full-back and St. Lucia international Kurt Frederick headed Jomal Williams’ left side corner into the back of the Saprissa net following a sloppy piece of goalkeeping by Dany Carvajal.Earlier, Carvajal was troubled by a couple Jones’ free kicks, even having a rebound enter his net off the boot of W Connection’s 20-year-old Brazilian signing Jhonatan Gerhardt in the 22nd minute. But luckily for the Costa Rica champions, the offside flag was already up, cutting short the celebrations of the Gerhardt and some cheering fans at the Port of Spain venue.Saprissa, travelling to Trinidad at full strength, rallied with a response in the 38th minute to level the scores 1-1 when 30-year-old forward Daniel Colindres collected a perfectly timed Ariel Rodriguez pass into the box, dusted off defender Shannon Gomez’s challenge, and fired into goalkeeper Julani Archibald’s far netting.But Archibald, St. Kitts & Nevis international shot-stopper, was unbeatable for the rest of the match despite Saprissa throwing everything his goal. The 21-year-old stood tall with brilliance whenever called upon and was clear man of the match before Jones’ winner.Jones, capitalising on free-kick after Frederick was brought down, made it 2-1 in the 82nd minute, lifting his strike over the wall before it dived into the bottom corner as Carvajal stood in disbelief.“W Connection played good,” added Campos. “Defence and on the counter attack. We already knew it was going to be tough. W Connection are a good team. We knew it wasn’t going to be the same game [as the first leg].”W Connection assistant coach, Earl Jean, credited the tactical aptitude of head coach Stuart Charles Fevrier for Wednesday’s victory over the three-time CONCACAF champions, under the tournament’s previous name, CONCACAF Champions Cup.“Since our last game against Saprissa I think he watched the video about fifty times,” said Jean, a former Connection and St. Lucia striker. “He (Fevrier) knows that they are a very good team and that we were up for a big challenge today.“He simply told our players to relax, enjoy, play with confidence, and that we are representing Trinidad and our club (tonight). (The players) carried out the system well. It was a tactical game.”Connection had threatened on the break and got close on multiple occasions, even having a shout for penalty in the 66th minute following a surging run by defensive midfielder Gerard Williams, who must miss the Santos match after picking up his second yellow card – and automatic red – in the stoppage time, with Honduran referee Hector Rodriguez sparing no mercy.“It was tough,” Jean said. “It was a bit harsh for Gerard. It’s a tough loss for us because Gerard brings a lot to our team. He is a player that uses heart and soul for the team. But I think we have young players around that will come in and give us what we want because coming from this victory I can only see positives for us.”Despite the suspension casualty of Williiams (G), Connection, who stood without the services of forwards Dwight Quintero (low fitness following illness), Jamal Charles (ankle) and Shahdon Winchester (returning from thigh injury) and midfielder Kevon Goddard (ankle), have more to celebrate ahead of next week’s clash against Santos.Andre Toussaint was brilliant. The 34-year-old attacker, who recently re-joined Connection after five years, showed that he is the right fit for the “Savonetta Boys” although missing the target on two excellent scoring chances from close up.His brilliance as an attacking midfielder/false 9, after replacing Gerhardt in the 70th minute, galvanised Connection in the latter stages.“He (Toussaint) brought a different dimension to our team,” explained Jean. “We have a lot of respect for Toussaint and he is a major signing for us. It’s a big plus because Toussaint is quality.”Wednesday's win snapped Connection's 10-game winless and five-game scoreless streak in the CCL, while Saprissa's bid to win three straight CCL games was dashed.Today (Thursday 17 September) Central FC will host Guatemala champions CSD Comunicaciones from 8 pm at the Hasely Crawford Stadium in second leg action Group D of the CCL. The “Couva Sharks” in search of their first win of the CCL could feed off the confidence of Couva rivals W Connection.Central will later host MLS outfit LA Galaxy on Wednesday 23 September, before Comunicaciones will take on Galaxy on October 21 to complete Group D.