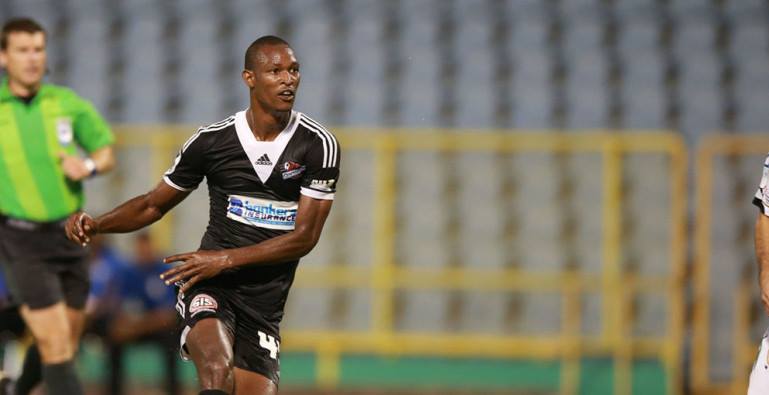 Central, which avenged a 1-0 defeat to Comunicaciones in Guatemala City on August 27, moved into second place in Group D on goal difference (-4 to -5), while the first-place LA Galaxy (2W-0D-0L, 6 points) was idle.The Couva Sharks broke the scoreless stalemate in the 61st minute, when Guerra -- from 17-yards-out -- tucked in the rebound of a saved Darrell Mitchell effort. It was his team-best second goal of the competition.Three minutes later, Canadian referee David Gantar sent off Mitchell with a straight red card for a late tackle on Comunicaciones’ Rolando Blackburn.The Guatemalan champion challenged from the outset as Brandon De Leon nearly capitalized on a poor back pass to goalkeeper Jan-Michael Williams, but the Central FC captain got a piece of the shot that deflected out for a corner in the opening minute.In the 19th minute, Emilliano Lopez took a throw-in off the bounce and fired toward the net from 24 yards, but the Argentine’s attempt sailed just wide of the far post.Central FC’s first scoring chance came five minutes later. Guerra took a free kick from the top left edge of the 18-yard box, but no one was able to connect with his floated ball.Three minutes from halftime, Williams came up big again for the current Caribbean champion, kicking away a shot from 10 yards by Lopez.The final scoring chance of the first half went to the host as Guerra put his 32-yard free kick on frame, but Mynor Padilla dived to his right to push the attempt away.Blackburn was played in toward goal in the 58th minute, but Williams thwarted the attempt, pushing it aside for a Comunicaciones corner kick.Next up in Group D, Central FC welcomes the LA Galaxy on September 22. The U.S. champion needs only a draw to seal progression to the quarterfinals.NOTES: It was the second big win for Trinidadian club football within 24 hours. On Tuesday, at the same stadium, DirecTV W Connection upset Costa Rica’s Saprissa, 2-1.ResultsCentral FC  1  v  Comunicaciones  0Guerra 61TeamsCentral FC - 21.Jan-Michael Williams; 2.Elton John, 17.Marcelle Francois, 24.Kevon Villaroel, 4.Andre Ettienne (Yellow 50); 15.Kaydion Gabriel, 10.Marvin Oliver (Yellow), 7.Jason Marcano (99.Marcus Joseph 56th), 45.Ataullah Guerra, 11.Darren Mitchell (Red Card 64); 33.Willis Plaza (14.Nicholas Dillon 90th).Coach - Ross Russell.Comunicaciones - 23.Mynor Padilla Zuniga; 2.Ruben Morales (13.Carlos Castrillo Alonzo 13th), Wilson Lalin, 4.Carlos Callardo (Yellow 23), 29.Carlos Figueroa Martinez (6.Carlos Mejia 62nd), 19.Nelson Miranda, 21.Brandon De Leon Ramos, 24.Kendell Herrarte, 25.Jorge Aparicio (Yellow 54) (17.Brayan Ordonnez 69th), 18.Emiliano Lopez, 9.Rolando Blackburn.Coach - Willy Olivera.Video - Central FC vs Comunicaciones HighlightsStandingsP  W  D  L  F  A  PtsLA Galaxy  2  2  0  0  10  1  6Central FC  3  1  0  1  2  6  3Comunicaciones  3  1  0  2  1  6  3

Guerra beauty gives Central victory over Comunicaciones.
ttproleague.comTrinidad and Tobago midfielder Ataulla Guerra scored one of his trademark curling strikes on Thursday night to hand 10-man Central FC a 1-0 victory over visiting Guatemala champions, Comunicaciones, in their second-leg Group D fixture of the 2015/2016 CONCACAF Champions League.The victory earned Central – one of this season’s CCL debutants – their historic first win of the confederations’ top club tournament and it happened in front of home fans at the Hasely Crawford Stadium in Trinidad.While a posse of visiting Comunicaciones supporters, who were chanting and drumming none-stop throughout the encounter, weren’t enough to rally “The Creams” as Central avenged a first-leg 1-0 defeat.At the final blow of Canadian referee David Gantar’s whistle, Central, now entering only a fourth season of existence, became the second Trinidadian side in 24 hours – after W Connection – to post a win against one of the confederation’s top clubs. On Wednesday night Connection defeated Costa Rica champions Saprissa 2-1 at the same venue in their second-leg Group A fixture of the CCL.“With the first win for Central in the CONCACAF Champions League, the guys and myself are honoured to be part of the celebration today,” said Central FC head coach Ross Russell following the match.Connection (3 points, 1-0-2) returns to CCL action on Tuesday 22 September in their final group match against Mexico’s Santos Laguna (3 points, 1-0-1). Saprissa (6 points, 2-0-1) leads Group A.Meanwhile Central (1-0-2), the Trinidad and Tobago Digicel Pro League champions, are now tied on 3 points with Comunicacions (1-0-2) but ahead of the Guatemalans on goal difference (-4 to -5) for second, while LA Galaxy (2-0-0), who must visit the “Couva Sharks” on Wednesday 23 September in Trinidad, leads the group with maximum 6 points.Guerra, who had initially slipped forward Willis Plaza a run towards goal, superbly curled the rebound into Mynor Padilla Zuiga’s far netting for a 1-0 Central lead and his second goal of the campaign in the 61st minute after the Comunicaciones goalie had done well to blank Plaza.Guerra actually had Central’s best opening look at goal in the 23rd minute when he was fed into the box by Plaza. However Comunicaciones defender and first leg scorer, Wilson Lalín, made a decisive interception before teammate and captain Carlos Gallardo fouled Darren Mitchell outside the box on challenging to win the short clearance.Comunicaciones goalkeeper Padilla was finally put to the test in stoppage-time of the first half when Guerra unleashed a 25-yard free-kick towards goal after Marcano was brought down. Padilla was unable to hold but was well-positioned to make a shutout.But although the joy of grabbing a 1-0 lead was still rushing through their veins, Central were reduced to 10 men in the 64th minute when winger Darren Mitchell was shown a direct red card from Canadian referee David Ganter for a dangerous foul on Comunicaciones forward Ronaldo Manrique Blackburne.Russell explained, “Whenever you’re a man down you have to go a bit more defensive but we really didn’t because I said we are taking all the chances tonight although having defence on our mind.”Blackburn, a 25-year-old Panama international, had threated the Central goal from as early as 14 seconds into the match, forcing goalkeeper Jan-Michael Williams into a low save.However Comunicaciones, a 66-year-old CONCACAF powerhouse and winners of the CONCACAF Champions League under its previous name, the CONCACAF Champions Cup, in 1978 and runners-up in 1962 and 1969, failed to find the back of the net despite largely dominating the first half.Comunicaciones’ attackers Emiliano López, of Argentina, and Brandon De Leon, one of nine Guatemala Gold Cup 2015 players in coach Willy Coito Olivera’s 18-man squad, were unlucky not to find the back of the Connection net ten minutes from the break following an error at the back by the “Couva Sharks” who did just enough to steer “The Creams” away from goal.Then in the 43rd minute, Williams’ goal was threatened again from consecutive corners and the Trinidad and Tobago international goalie even sacrificed his body on the line to put behind a Blackburne strike in the second.The Central captain also made saves in the 73rd and 84th minutes to deny Comunicaciones 24-year-old substitute midfielder Brayan Ordonez and Lalín, respectively, while preserve his clean sheet.Speaking with media following the match, Comunicaciones coach Willy Coito Olivera, with the assistance of a translator, said he would have settled for a draw. He also said that Central pressed more in Trinidad than when both sides met in Guatemala City on August 27.The Comunicaciones coach explained, “Comunicaciones had control in the first half. Central got the better in the second half and got the goal.”Russell, who expressed some concerns with his defence, shared similar views, saying, “First half we (Central) were under the gun. (Comunicaciones) threw everything at us (…) because winning this one would have put them into the tie (with LA Galaxy). While we needed a win to boost our confidence (ahead of the Galaxy match). First half was a little shaky but the second half I think (our) players came out and were brilliant. I like to coach in moving around the ball a lot, keeping it a lot, and going forward in attack. I love to attack and we saw that in the second half.”