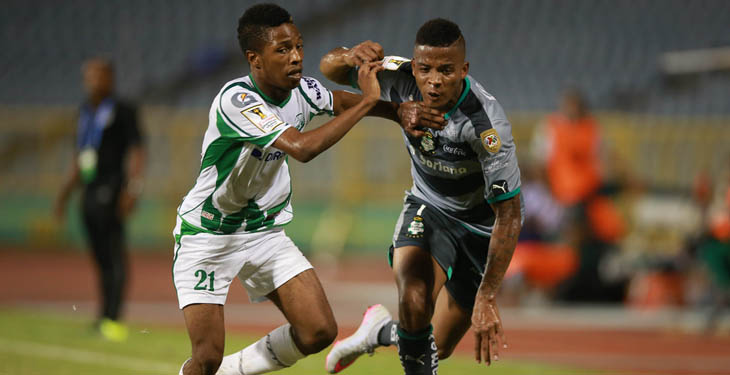 The result lifted the Guerreros into a first-place tie with idle Saprissa (2W-0D-1L, 6 points) in Group A. They will face each other in a top-of-the-table clash to conclude group play on October 20 in Torreon, Mexico. W Connection completed its schedule and has been officially eliminated from the competition. Renteria struck in the second minute, finding the back of the net at the left post after Bryan Rabello’s left-sided corner kick struck defender Tristan Hodge’s left thigh inside the six-yard box. In the 21st minute, the visitor nearly doubled its lead, but goalkeeper Julani Archibald did well to save a blast from distance off the right foot of Diego Gonzalez. Five minutes later, W Connection’s Dimitrie Apai latched on to a ball played along the ground and into the right side of the box. Without hesitation, he uncorked an effort that appeared destined for the left side of the net, only for goalkeeper Agustin Marchesin to somehow get his right foot on the ball while leaning in the opposite direction. W Connection had a golden chance to equalize in the 56th minute, but with Marchesin out of the net, Shahdon Winchester’s attempt from 12-yards out was blocked by Adrian Aldrete. Marchesin came up big on a 32-yard swerving blast by Kurt Frederick, parrying away the hard to handle ball to his right.ResultsSantos  1  v  W Connection  0Rentería 2TeamsW Connection - 18.Julani Archibald; 2.Kurt Frederick, 4.Maurice Forde, 21.Shannon Gomez, 5.Tristan Hodge, 16.Alvin Jones (capt) (Yellow 57); 17.Aikim Adams (11.Neil Benjamin Jr, 73rd), 26.Briel Thomas (Yellow 77), 19.Dwight Quintero (14.Andre Toussaint 53rd), 12.Dimitie Apai, 9.Shahdon Winchester (27.Jhonatan Gerhardt 80th).Coach - Stuart Charles-Fevrier.Santos Laguna - 1.Agustín Marchesín; 2.José Abella, 14.Nestor Araujo Razo, 3.Kristian Alvarez, 10.Bryan Rabello, 16.Adrian Aldrette, 6.Sergio Ceballos Hernandez (Yellow 60), 8.Diego Gonzales, 9.Luis Mendoza Escamilla (21.Jorge Djaniny 66th), 7.Andrés Rentería (Yellow 85), 18.Edson Rivera Vargas (27.Javier Orozco 81st).Coach - Pedro Caixinha.StandingsP  W  D  L  F  A  PtsSaprissa  3  2  0  1  7  3  6Santos Laguna  3  2  0  1  6  2  6W Connection  4  1  0  3  2  10  3Video - W Connection vs Santos Laguna Highlights

Connection rues missed chances after early Rentería goal gives Santos the edge.
ttproleague.com.Andrés Rentería’s second-minute goal earned Mexico’s Santos Laguna a lifeline in 2015-2016 CONCACAF Champions League (CCL) group stage and now the Mexico champions must tackle Costa Rica's Saprissa for the top spot.Rentería, a 22-year-old Colombian forward/winger, handed Santos the eventual match-winning goal for a 1-0 result over W Connection on Tuesday night at the Hasely Crawford Stadium in their second-leg clash of Group A.The result put Santos (6 points, 2-0-1) tied with Saprissa (6 points, 2-0-1) – who they must meet in the final group match on October 20 in Mexico – but second to the Costa Rica champions on the head-to-head, having lost 2-1 in the first leg.“Our chances are open (now),” said coach Pako Ayestarán, who took over at Santos on August 22 after Pedro Caixinha quit the post on August 15. “We must win the game (against Saprissa).”While Connection (3 points, 3-0-1), who, before kick-off, were virtually out of the running for the single qualifying spot towards the quarterfinal stage, finished at the bottom of the three-team group.However Connection head coach Stuart Charles Fevrier, who last week led the “Savonetta Boys” to a 2-1 win over Saprissa at the same venue, had reasons to be proud.“We certainly have demonstrated that we have matched these opponents,” said the St. Lucian Connection coach.Crediting his players, especially in defence, Fevrier added, “We totally nullified the Santos attacks. Our defenders did great. This is great for the future of Trinidad and Tobago.“Before we would been happy for a 1-0 loss against a team from Mexico… but tonight we are disappointed. Apart from the scrimmage goal early, they (Santos) never created a single clear cut chance… while we created about five.”Santos grabbed the vital goal just one-minute-and-a-half into play at the Port of Spain venue.Rentería fired in from close range to beat goalkeeper Julani Archibald on a second bite off midfielder Bryan Rabello’s corner, which was swung in from the left.Rentería attempted to double his tally in the 20th minute from 22-yards out, but Archibald, who a minute later did well to keep out a Diego Gonzalez’s strike towards the top corner, put behind the goal-scorer’s powerful strike for a corner.But from then on, despite having a difficult night at the office, Connection, who stood without key suspended players: attacking midfielder Jomal Williams and defensive midfielder Gerard Williams, and defender Christian Ocoro Viveros due to injury, dominated on chances but failed to hit the back of the Santos net.“(The early goal) worked for us,” said Ayestarán, who was generally displeased with his players’ performance.The Santos coach said that Connection’s performance meant that they are closing the gap in Concacaf.“They (Connection) didn’t allow us many chances. They went close with chances to score. Definitely closing the gap.”In the 26 minute, Surinamese forward Dimitrie Apai, who started in attack with Shahdon Winchester and new signing Dwight Quintero, was denied by the legs of goalkeeper Agustin Marchesin with Winchester supporting in the box.A bit of luck also fell to Connection in the 56th minute when Kurt Frederick’s low left-side cross was missed by the Santos centre-back but instead of testing Marchesin early, the 21-year-old Apai opted to pass to Winchester, whose strike was blocked out by a defender.Two minutes later the duo created a scare for Santos and a reason for those who turned up at the venue to cheer.Then Frederick audaciously tried to win Connection the equalising goal in the 61st minute and his effort from distance brought out a save from Marchesin.Concerned, Santos coach Ayestarán responded with the introduction of Djaniny Tavares, double-scorer in Santos’ 4-0 first-leg win over Connection, and Jesus Molina, replacing Luis Mendoza and Diego Gonzalez, respectively, just over the hour mark. But that failed to inspire any real threat on Connection.Instead, the “Savonetta Boys”, who recently had some of their top players such as Joevin Jones, Mekeil Williams and Jerrel Britto transferred outside of Trinidad, had the final best effort on goal in the 90th minute when Briel Thomas’ strike from distance deflected just wide.Fevrier hopes that his team’s performances in the last two CCL matches will encourage Trinidadians to have more respect for the Pro League. He also hopes it will encourage locals to come out to regular league games and see the type of work the club does on a continuous basis. The W Connection coach even believes that the last two CCL matches were worthy of 10,000 fans.However disappointed in his team’s failure to find the back of the net against the Mexico champions, Fevrier said he has been looking for a striker that can give 20 plus goals per season – a quality the club failed to acquire since Earl Jean then Jonathan Fana Frias.He bemoaned that present strikers hardly do personal practice to improve their game, something that was customary of former top Trinidad and Tobago strikers such as Bobby Sookram, Leroy Spann, Steve David and Ron La Forest.Fellow Pro League outfit and reigning champions Central FC will take on MLS outfit LA Galaxy in Group D action of the CCL today (Wednesday 23 September) from 8 pm at the Hasely Crawford Stadium. Central are coming off last week’s 1-0 win over Guatemala’s Comunicaciones but are virtually out of the quarterfinal spot race.