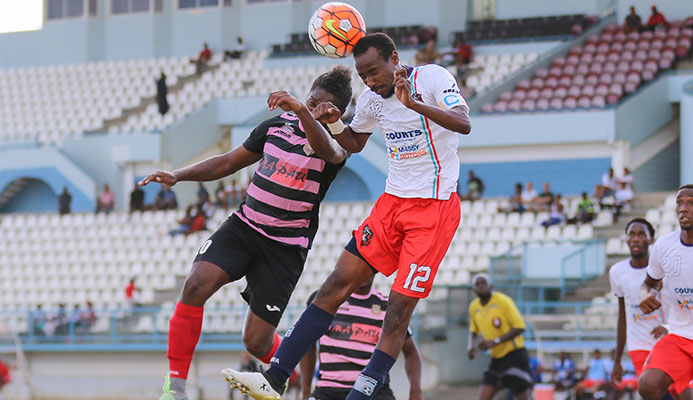 Morvant Caledonia United will attempt another upset in the 2017 FA Trophy competition when they take on defending champions North East Stars from 3:30pm at the Hasely Crawford Stadium in one of seven Round-of-16 clashes on Sunday.

Last Monday’s random draw pitted Morvant Caledonia against current Pro League leaders North East Stars in the only all-Pro League match-up for a place in the FA Trophy quarter-final round on November 12. The semi-finals and final are carded for November 26 and December 17 respectively.

“[The ambition] is to go all the way and win the FA Trophy, again,” said Morvant Caledonia assistant coach Abdallah Phillips, whose side must also face North East Stars on Tuesday in Round Two Match Day Four of the Pro League.

“Going all the way and winning the FA Trophy—the most prestigious title in the land would put some gloss on the season for us,” continued Phillips. “But it won’t take away from what we are trying to achieve in the Pro League. We are fourth in the (Pro) League presently and committed to finishing as high as possible.”

Phillips continues to serve as caretaker with regular head coach Jamaal Shabazz currently away on international duty as head coach of the Trinidad and Tobago Under-17 Girls at the 2017 Caribbean Girls U17 finals in Haiti.

North East Stars, champions of 2003 and 2014-15, defeated Super League side Siparia Spurs 5-1 in the first round before dispatching South Football Association (SFA) side Pitchmen FC 4-2 in the second round.

W Connection, four-time former champions (1999, 2000, 2002 & 2013-14) and runners-up to North East Stars when the FA Trophy was last contested, will host Cunupia FC from 3:30pm at the Mannie Ramjohn Stadium in one of four Pro League-versus-Super League clashes on Sunday.

Elsewhere on Sunday, MIC-IT St. Ann’s Rangers must travel to Grand Chemin against Club Sando Moruga from 3:30pm and simultaneously at the Police Barracks in St. James, Point Fortin Civic will go up against Police FC’s Super League side.

Then on Wednesday, FC Santa Rosa will travel to 1976 FC Phoenix from 5pm at Canaan Recreation Ground in Tobago to complete Round-of-16 play.