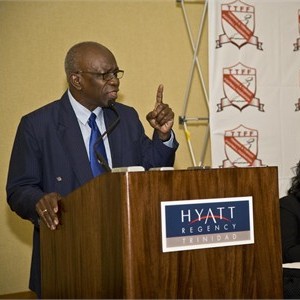 Former FIFA Vice President Jack Warner said he got the World Cup television rights for Trinidad & Tobago for $1 after helping Sepp Blatter get elected president of the soccer ruling body.

Warner, who quit world soccer’s governing body in June after accusations of bribery, said today in a statement that he got the rights from FIFA in 1998 via a Mexican company and also acquired them for the 2002, 2006, 2010 and 2014 editions. He used the revenue from selling on the rights to develop the sport in the Caribbean, where he’s from, according to the statement.

Warner quit during a FIFA investigation into allegations about him and another vice president, Mohamed Bin Hamman. The pair was accused of giving Caribbean officials $40,000 in cash to gain support for Bin Hammam’s presidential campaign against Blatter. At the time, Warner denied wrongdoing and said he’d been “hung out to dry” after 30 years with FIFA.

Zurich-based FIFA said in an e-mail today “it will look into” Warner’s comments, and the organization’s London-based spokesman Brian Alexander declined to make any immediate response.

Warner said he refused to endorse Blatter in the June election even though he was offered the rights to the 2018 and 2022 World Cup for a nominal fee. He also alleged that he was offered other “inducements” to develop soccer in the region, including relaying turf at a stadium in Trinidad & Tobago and $1 million in grants, according to the statement.

FIFA rescinded an agreement with International Media Content Ltd.’s SportsMax cable channel to broadcast the 2014 World Cup in the Caribbean after “only recently” becoming aware that a company owned by Warner negotiated the sale on behalf of the regional soccer association, the BBC reported Sept. 8, citing a FIFA letter to the association.

Hammam withdrew his candidacy in May, and Blatter was re- elected on June 1 as the only candidate. Hammam denies wrongdoing and is appealing a life ban from soccer at the Court of Arbitration for Sport.

Blatter in October announced plans to reform FIFA, which governs the sport and oversees the World Cup. The soccer showpiece tournament generates about $4 billion in television rights, sponsorship and other income.

Warner has disclosed a string of revelations about alleged wrongdoing by Blatter since being forced to resign from FIFA in the wake of the cash-for-votes scandal that also led to the downfall of the former Asian football chief Mohamed Bin Hammam, banned from all football activities pending appeal.

In his latest tirade, Warner claimed he was awarded lucrative World Cup TV rights for a nominal $1 (£0.65/€0.77) after assisting Blatter's election as President.

Warner still believes he was let down and his latest comments have prompted a strong intervention by the prominent Parliamentarian Collins, who recently formed a global grouping of politicians to push for reform.

Collins describes the new allegations as "shocking" and believes Blatter, who last October announced a two-year road map towards cleaning up FIFA, must also clean up his own act.

"Is he serious about sorting the mess out, or is he only interested in protecting his own?" asks Collins (pictured), who sits on the Culture, Media and Sport Select Committee.

"These are serious allegations that must surely go to the very top of FIFA and need to be fully and independently investigated."

Warner has alleged that in 1998, through a Mexican Company called OTI, he was sold the FIFA World Cup rights for Trinidad and Tobago for $1, following his support for Blatter to win the FIFA Presidency.

Warner also states that he used the sale of those rights "primarily to assist in the development of football in Trinidad and Tobago" and further alleges that in 2002 he was personally sold the World Cup TV Rights for 2002 and 2006, and that he later acquired the rights for the 2010 and 2014 championships.

Warner, who ran the game in the Caribbean, additionally claimed that he refused to back Blatter for this year's election – the 75-year-old Swiss was re-elected unopposed in June after bin Hammam withdrew – despite being offered the 2018 and 2022 World Cup rights for Trinidad and Tobago, again for a nominal fee.

"If true, how could deals like this be done without the knowledge of the most senior people in the organisation?" asks Collins of Warner's claims.

"This is a question that has to be answered by Sepp Blatter and it also demonstrates why there has to be a committee of investigation and inquiry which can act independently of the President and FIFA's Executive Committee.

"In the last year, 11 of the 24 members of FIFA's ruling Executive Committee have faced allegations of corruption; no real progress towards reform has been made within FIFA and there has never been an independent investigation into all of the bribery allegations made against them.

"One man is ultimately responsible for this – Sepp Blatter."