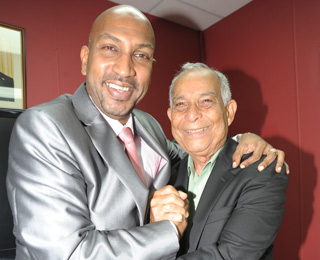 SPORTS MINISTER Anil Roberts was adamant yesterday that not one red cent of taxpayers’ money will be used to pay a $4.2 million debt owed to 13 members of the 2006 Soca Warriors team by the Trinidad and Tobago Football Federation (TTFF).

Roberts rejected calls for the establishment of an interim football association, saying TT would be banned from world football by FIFA if it did that.

He also gave the assurance that funding for this country’s Under 17 and Under 23 football teams will come directly from the ministry and they will not suffer as result of the dispute between the TTFF and the players.

Speaking with Newsday following the adjournment of the House of Representatives, Roberts declared: “Taxpayers money will not be used to pay any debt of any national sporting organisation whether it is the football association, the archery association or swimming.

“That is not going to happen. The TTFF is an autonomous body. The taxpayers have no legitimate responsibility to repay any monies that were owed. If they are calling upon the minister and the ministry to take taxpayers money to pay a debt owed by some organisation, that will never happen,” he said.

Saying he could not get involved in the matter because it is sub-judice, Roberts said, “The wheels of justice are turning. The law is the law. The players have their judgment in hand and they have to do, what they have to do. “Nobody is above the law and they have to follow their process.”

He rejected former national defender Brent Sancho’s call for him to launch an investigation into this matter.

“The powers of investigation fall within the remit of the Commissioner of Police, the Integrity Commission, these legal bodies,” Roberts explained.

On calls for the creation of an interim football federation to temporarily replace the TTFF,

Roberts declared: “That cannot be done. TT will be banned from football from FIFA for governmental interference.”

Saying many people had the misconception that the TTFF would get “a blank cheque” because former FIFA vice-president Jack Warner is a government minister,

Roberts suggested Sancho advise the federation’s membership to read the TTFF’s constitution and see what redress they can obtain.

He said the Under 23 and Under 17 football teams “ will continue to get funding going through the Olympics but the ministry will pay the invoices directly.”