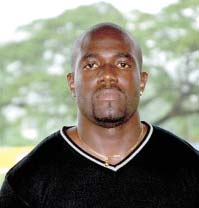 Former Dundee and Gillingham goalkeeper Kelvin Jack came on the defense of himself and the 12 rebel Warriors who are all currently locked in a 6year court battle with the Trinidad and Tobago Football Federation (TTFF) over 2006 World Cup bonus.

Recently Technical Director of the Trinidad and Tobago Football Federation, Anton Corneal and National U-23 head coach Angus Eve expressed their views within local football regarding the 2006 World Cup players and their latest action on the local governing body which obviously did not go down good with the former Soca Warriors goalkeeper as he had the following to say.

"The comments made by Angus Eve and Anton Corneal insinuating we are selfish by taking the action we have against the TTFF (Re: levy), is without thought and baseless in my opinion. What Angus and Anton should be doing is publicly asking Warner and the TTFF to produce accurate accounts and tell the entire country where millions of tax payers’ dollars have disappeared to."

"Angus, now he is a coach, seems to have a very short memory because I have had many conversations with him over the years about the unaccountability of the TTFF and Warner. He was a huge critic of their actions so I'm dumbfounded by his comments. What have we done wrong? I will tell you."

"Ask for accountability and request we be paid the terms of our contract. This could have been ended years ago but Warner and the TTFF never entered into serious discussions about settling this matter. We were abused, vilified and called greedy. How can we be greedy? We are not the ones who have failed to account for over 200 million dollars."

"With respect to Anton Corneal I could remember having a conversation with him 6 years ago in Germany. We were in the hotel lobby the day before we left. He was incensed by the way he was treated by the same regime that runs the TTFF right now."

"He was being grossly underpaid in comparison to the rest of the Dutch coaches. I will not say the amount of money involved, but believe me he was firmly in the players' corner. These two guys seem to have short memories so to be honest they should keep their mouths shut and not comment especially when the organisation they work for is 100 percent in the wrong."

"They probably need to read a copy of the judgment of Ian Mill QC and the honorable Devindra Rampersad. Our actions will help shape football in Trinidad and Tobago for the better and those same young boys who Angus coach will benefit."

"They will not be taken advantage of and will eventually be able to concentrate solely on improving their game. Not about whether the federation they play for will pay them the terms of their contract."

"We have repeated time and time again that we do not want to initiate bankruptcy proceedings against TTFF, but if we are left with no choice so be it. We really do need to remember that we have been ultra patient with these people (6-years)."

"It is not our fault if insolvency proceedings begin thereby affecting the participation of the Under 23's and the Women's U-17 team in their respective tournaments. It will be the fault of the TTFF, Warner and all those who could conjure up pathetic reasons to support unaccountability and the grave injustice we have suffered for six years," ended Jack.