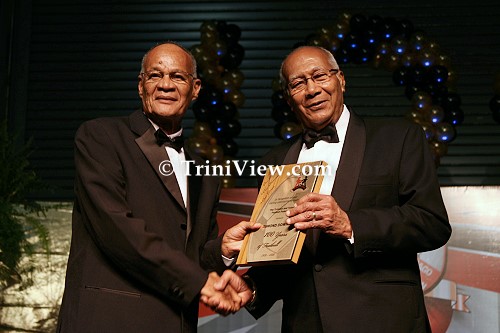 Retired FIFA referee and instructor Osmond Downer was honoured for his unstinted service to Caribbean, international and local football.

He was presented with an award by the Trinidad and Tobago Football Association (TTFA) to mark his 56 years service.

The presentation took place at the Hasely Crawford Stadium in Mucurapo, shortly before the start of the World Cup qualifier between the Trinidad and Tobago “Soca Warriors” and Guatemala.

Presentation of the award was done by TTFA first vice-president Ewing Davis to Downer “in recognition of your sterling contribution to the development of football in Trinidad and Tobago since 1960 with special emphasis on Refereeing.” Downer return to Trinidad in 1960 after university studies abroad, but not before becoming an English Referee Association- qualified referee.

And, since then, he has been associated with football, and refereeing in particular, dating to 56 years.

In 1968 Downer was issued his FIFA referee’s badge making him the then-youngest man in the world to be a FIFA International referee.

Downer retired from the FIFA panel in 1985 after holding a FIFA badge for 17 years.

But he was not done, as he was appointed a FIFA Referee Instructor in 1988 and retired from this position after 20 years.

During this period, Downer conducted training courses for all referees in TT from 1968 unto the present - 48 years.

Apart from TT, Downer conducted training courses throughout the Caribnbean, North and Central America for over 40 years, and was instrumental in the forming of the Referees Association in Grenada and St Vincent and the Grenadines.

He received a FIFA Special Award in 1985 for his service as a local and internationl referee and instructor.

Added to this, for the past 51 years to today, Downer has been a delegate to the annual general meeting of the TTFA.