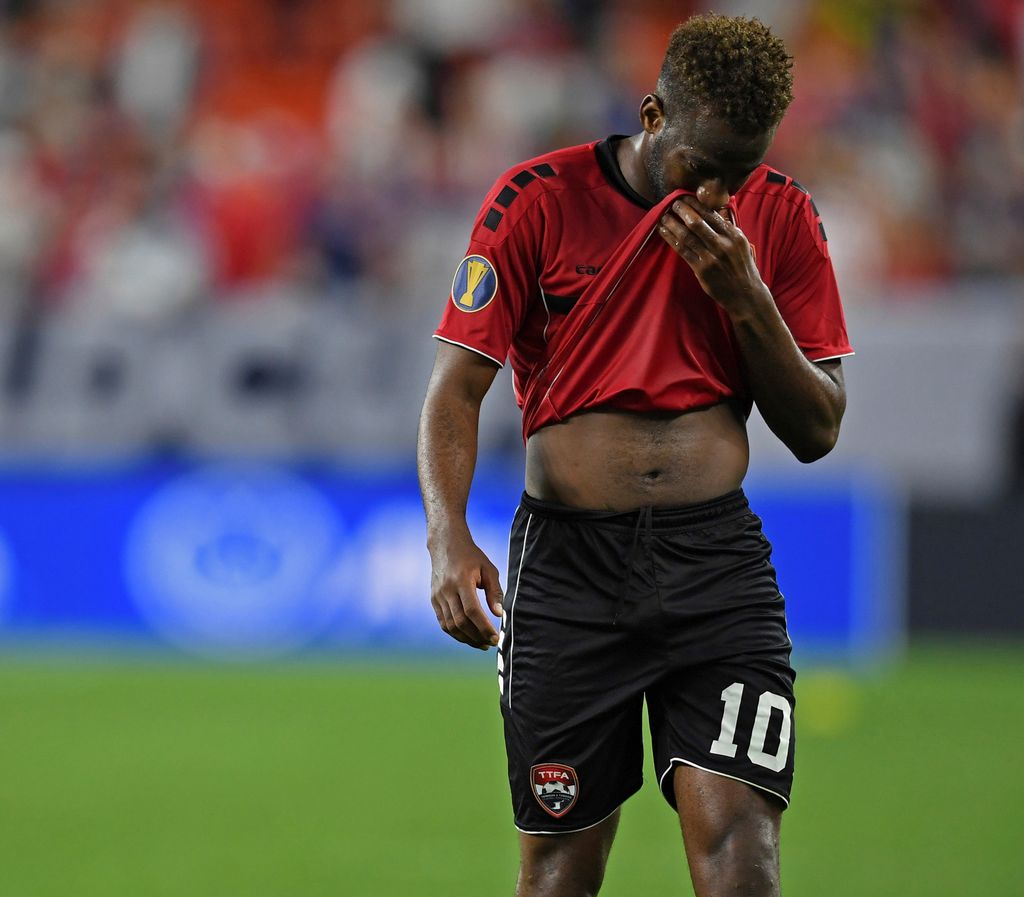 KEITH LOOK Loy and Terry Fenwick are calling for the TT Football Association (TTFA) to be called to account for the dismal state of the game locally.

The outspoken duo made their calls during separate telephone interviews yesterday, after T&T were embarrassed 6-0 by hosts United States in their Concacaf Gold Cup Group D match in Cleveland, Ohio.

Look Loy, who is a board member of the TTFA and owner/president of FC Santa Rosa, and Fenwick, former England defender and ex-San Juan Jabloteh and Central FC coach, have also pointed fingers at TT men’s team coach Dennis Lawrence for his tactics and team selection.

In fact, Look Loy have called on the TTFA hierarchy, as well as Lawrence, to step aside in order to avoid further misery on the image of T&T football.

Look Loy commented, “This is a national and international disgrace (but) this comes as no surprise. This debacle was prepared over the last two years because we re-appointed a coach who does not have the capacity. I was the only board member to oppose his re-appointment.

“When I proposed that we should appoint him till the end of the Gold Cup, that was swatted aside and the board went for a re-appointment for two years,” continued Look Loy. “So now we’re stuck with him. Given the financial situation of the TTFA, if we remove him, we’ll have to pay him off and the TTFA is in no position to do that.”

Fenwick noted, “The whole administration, particularly on the technical side, have been struggling because of the poor preparation for tournaments and games. We looked disorganised, we didn’t look structured, we didn’t look like there was a game plan. The team is playing a style of football that does not suit them. They are not comfortable with it. And the results tell that story.”

Stephen Hart was fired by TTFA president David John-Williams in December 2016 and replaced by Belgian Tom Saintfiet who, in turn, stepped down a month later, claiming a lack of support from the local governing body.

Lawrence, who was serving as a scout with the Belgium men’s team (under the guidance of Roberto Martinez), was given the mantle as T&T coach in January 2017, even though he never held any role as head coach, either at the club or national level.

Look Loy said, “If (Lawrence) was a foreign coach, he would have been gone a long time ago, people would have been howling for his head. We fired a coach who took us to two quarter-finals of the Gold Cup, 2013 and 2015, to replace him with a coach who can’t win a match.

“The Guyanese (who T&T will play on Wednesday) right now are feeling they can take our scalp,” he continued. “It is the loss of future opportunities because foreign coaches now are not going to be taking TTFA and our national team seriously. We are no longer held in respect and our players are no longer taken seriously.”

About Lawrence’s current position, Fenwick said, “I think he’s had a very difficult time. The team looks like they’re under pressure all of the time. (Regarding) team selection, we brought our best player (Kevin Molino) off the bench (on Saturday).

“In terms of the immediate situation, I cannot understand how Lawrence could pick a 23-man squad, included one forward (Shahdon Winchester) who hasn’t seen the field yet, rely on midfielders to score and your two leading goalscoring midfielders (Molino and Joevin Jones) are on the bench. We are the only team in the tournament not to have scored a goal at this point. We concede goals exactly the same way. Our biggest weakness is marking in the (penalty) box.

“We have become accustomed to hear him talk about how it’s a work-in-progress. He took no responsibility for that loss and simply put it down to the players losing concentration. This is a team that he has had for two years. If in

two years, you cannot get players accustomed to your tactics, then you don’t deserve to be in the job. I put all of this clearly at the feet of John-Williams and his cohorts.”

According to Fenwick, “I think John-Williams and his board should all be held to account. If you looked at his manifesto, everything was going to be transparent. Nothing has been transparent. He’s tried to micro-manage everything himself. National teams at every age group are either not in training or not competing. (They) have lost eight court cases against former employees. The whole administration has been shocking.”

Where do we go from here, as far as T&T’s football is concerned?

Fenwick replied, “We’ve got no development programme. NLCB committed (millions) for youth development and grassroots football through the TTFA. Where is the development? Coaches that are not good enough, and it doesn’t take a genius to recognise that they all operated in the past with the president.”

T&T GOALKEEPER Marvin Phillip and coach Dennis Lawrence both expressed disappointment after the team’s 6-0 humiliation by the United States in their Concacaf Gold Cup Group D fixture on Saturday evening.

According to Phillip, “It’s absolutely embarrassing for us. We knew what was at stake, but we just didn’t show up.”

T&T were beaten by Panama 2-0 in their opening game last Tuesday, and needed to avoid defeat against the reigning champs US to stay alive in the competition.

The 34-year-old goalie noted, “We had a reasonable first half but there was a period in the second half, about 25 minutes, when we just lost structure (and) shape. When you meet teams like the US, they would take advantage of those situations.”

T&T will end their Gold Cup campaign on Wednesday against Guyana and Phillip said, “We need to do a rain-check on ourselves and try to play for some pride.”

Lawrence suffered his 15th defeat as T&T coach since taking over from Belgian Tom Saintfiet in January 2017.

During the post-match media conference, he said, “We have to change (our) mentality. We have to learn to stand up and fight.”

He added, “We lost concentration, we started to go gung-ho to see if we can get back in the game. That’s not the way we do things. You have to stay organised.”

Experienced midfielder Kevin Molino and Joevin Jones started the game on the bench, and Lawrence explained, “Molino just came off a (knee) injury. I have to protect the players and ensure that I don’t push them at the wrong time.”

Referring to the forthcoming Guyana match, Lawrence pointed out, “There will definitely be changes. We need to put this behind our backs as quickly as possible.”

A pair of ex-national players were both scathing in their views, on Facebook, of Saturday’s result.

Former T&T women team’s skipper Maylee Attin-Johnson wrote, “They love to say ‘I want to give back to my country’. Their supporters love to say ‘he/she patriotic’. I would say, these people love to use patriotism conveniently. Let’s see how patriotic the coach is. I hope he does the honourable thing and resign.”

Attin-Johnson added, “To the players, you must take blame as well. There is so much a coach can do. Fitness is something that you as a player can control and as a professional coming to a national team a coach shouldn’t have to focus on getting you fit. Effort is something a coach cannot teach you, that’s a personal choice.

“I do not care if you have beef with a coach, a player or a federation. Once you decide to don the red, black and white, and walk out on that field, nothing else should matter but playing with maximum effort and pride.”

Lawrence’s former T&T teammate, goalkeeper Kelvin Jack wrote, “I can talk about the schoolboy errors made by the players and their shocking naivety. I can talk about tactics or lack of tactical awareness. I can talk about our lack of technical ability. I do have a slight bit of sympathy for Lawrence but ultimately he must shoulder responsibility for on-field matters; only to a point though.. his record is abysmal however he lacks many tools.

“David John-Williams is the president of the TTFA (TT Football Association) and it is truly astonishing how his ineptitude and depressing lack of vision has not caused TT football fans to launch a mass protest demanding his resignation.”

Look Loy said, “In terms of the immediate situation, I cannot understand how Lawrence could pick a 23-man squad, included one forward (Shahdon Winchester) who hasn’t seen the field yet, rely on midfielders to score and your two leading goalscoring midfielders (Molino and Joevin Jones) are on the bench. We are the only team in the tournament not to have scored a goal at this point.

We concede goals exactly the same way. Our biggest weakness is marking in the (penalty) box