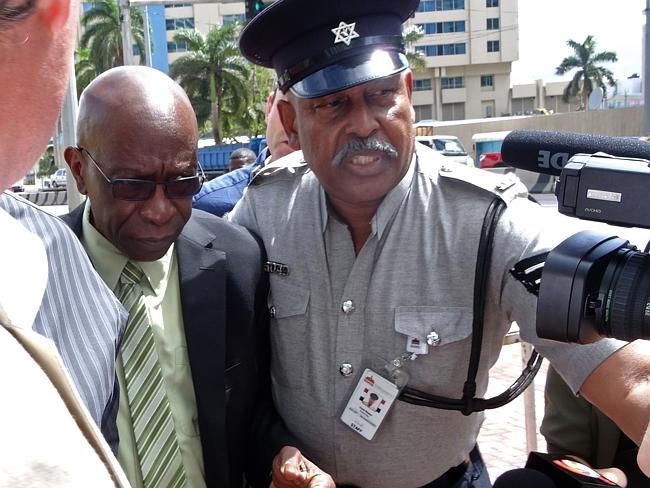 FORMER North American soccer confederation president Austin “Jack” Warner, accused of taking millions in bribes and kickbacks, was found in default, on Monday , in a US$20 million lawsuit against him by Concacaf which accused him and fellow FIFA official Chuck Blazer of making a fortune through embezzlement.

US District judge William F Kuntz entered judgement against Warner, who is facing extradition to the US in a separate criminal case, on Monday. Warner never responded to the lawsuit by Concacaf after he was served with it in October 2017. Kuntz granted Concacaf’s motion for default judgement against Warner, with no opposition, as he was unrepresented in court. The lawsuit, filed in April 2017, mirrored allegations in the US indictment that resulted in charges against several top football officials.

Concacaf’s case against Warner and Blazer accused the two of making a fortune through embezzlement – allegations that mirror those in a sprawling US criminal investigation that has resulted in charges against several top football officials. The suit accused the pair of negotiating bribes and kickbacks in connection with lucrative broadcasting rights for tournaments including Concacaf’s Gold Cup championship.

“There can be no doubt that Warner and Blazer victimised Concacaf, stealing and defrauding it out of tens of millions of dollars in brazen acts of corruption for their own personal benefit at the expense of the entire Concacaf region,” the suit said. Both men were banned from FIFA for life.

It also sought US$20 million in compensatory damages and unspecified punitive damages. It includes the cost of the Centre of Excellence, which is also the focus of a separate claim in the local courts.

Blazer, Warner’s co-defendant, a former Concacaf general secretary, reached a plea agreement stemming from the criminal indictment for which Warner is facing extradition on allegations of racketeering, wire fraud and money laundering.

Blazer died in July 2017, and his estate settled with Concacaf for US$20 million, but the confederation said it was unlikely to recover the money because of unpaid taxes and another US court’s ruling that the estate was insolvent.

In TT, Concacaf filed yet another lawsuit against Warner, in his personal capacity and as a partner in the firm Dr Joao Havelange Centre of Excellence; the centre itself; Renraw Investments Ltd and CCAN and Company, also in its personal capacity as partners in the centre; Warner’s wife Maureen; and accountant Kenny Rampersad and his company.

That lawsuit, being heard by Justice Robin Mohammed, seeks compensation for the misappropriation of funds with respect to the ownership and use of the Centre of Excellence (COE) complex in Macoya.

Concacaf is seeking to recover its assets and hearing of an application by Renraw, CCAM and Maureen Warner to have the claim against them struck out came up before Mohammed yesterday at the Hall of Justice in Port of Spain. It is the companies’ and Mrs Warner’s contention that the claim is statute-barred and cannot go forward.

Making the case for them was Senior Counsel Fyard Hosein, who argued that Concacaf’s claim against the three parties should be dismissed as it was “generalised and lacking in particulars and direction.”

Mohammed is expected to rule on the applications at a later date.

According to the TT claim, Warner and Blazer, in breach of their fiduciary duties, defrauded Concacaf of tens of millions of US dollars by engaging in self-dealing schemes to enrich themselves and the other defendants. The allegations against them also revolve around the management and use of the COE, and in particular concerns an alleged conspiracy to misappropriate over US$50 million in Concacaf money by claiming the COE belonged to Concacaf. Conflict of interest is also alleged against the group and Concacaf is seeking reimbursement for US$37.8million, in addition to unquantified sums for general and exemplary damages, an account for all profits and funds sent by Concacaf and the ownership of the land, assets and property of the COE. In the US claim heard in the Brooklyn court on Monday, Concacaf alleged Warner and Blazer accepted millions from companies in foreign governments in exchange for their votes and broadcasting rights in major tournaments, including the 2010 World Cup.

Warner has repeatedly accused Concacaf of waging a personal war against him and has labelled the allegations as spurious. In the matter before Mohammed, Concacaf is represented by attorneys Christopher Hamel-Smith,SC, Jonathan Walker, and Cherie Gopie.