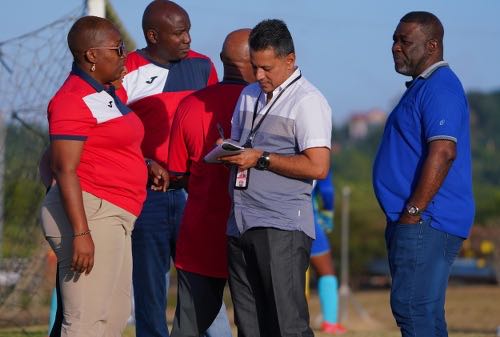 Trinidad and Tobago Football Association (TTFA) president William Wallace said he had the right to unilaterally give Ramesh Ramdhan a two year contract as general secretary and criticised his United TTFA colleagues for being ‘premature’ in their condemnation of his actions.

The United TTFA slate, a lobby group that campaigned for the 2019 TTFA general election with Wallace as its leader, distanced itself from the president’s decision to sign a deal with Avec Sport and ink fresh terms with Soca Warriors head coach Terry Fenwick and Ramdhan without board approval.

The United TTFA release was sent along with the names of vice-presidents Clynt Taylor, Susan Joseph-Warrick and Sam Phillip attached along with Northern FA president Anthony Harford and Super League president Keith Look Loy. The only member missing from the statement was Wallace.

However, the TTFA president stood his ground.

“The terms of Ramesh’s contract as far as I am concerned—and I don’t know if I am misinterpreting the constitution here—is a matter for the president,” Wallace told Wired868. “The board appoints the general secretary but the conditions have to suit me. The president has the right to negotiate the terms of the contract.

“If I have things to roll out that will take two years and he will be a major part of that, why must I go with one year and have to always be returning to the board? I feel I have a right to do that according to the constitution.”

Article 39.3 of the TTFA Constitution states: ‘Only the president may propose the appointment or dismissal of the general secretary’.

“As far as my reading, the one thing that doesn’t come under the board’s power is the secretary,” said Wallace. “Only I can propose for him to come in or be dismissed and the board has no veto power in terms of who can be secretary. The constitution is clearly saying that the secretary has to be somebody that the president is comfortable working with.

“Nowhere in there does it say the board dictates the terms of the contract.”

Wallace did not share his view of the constitution with the TTFA board when it met on 15 December and appointed a general secretary—among other things. At the meeting, Ramdhan did not appear to be a popular choice with several board members questioning the former World Cup referee’s suitability for the job.

By way of compromise, Look Loy suggested that Ramdhan be given a one-year deal, which was grudgingly accepted.

One board member, according to the minutes, said that he ‘would support the decision for a one-year contract but he was not very happy based on his previous work ethic’.

The aforementioned board member was Wallace’s own first vice-president, Taylor, who, as a former referees association vice-president, should have had first-hand knowledge of Ramdhan’s professional capabilities.

Even with the shortened tenure, Wallace barely got Ramdhan’s appointment through—as six members voted in favour with one against and four abstentions. Although the minutes of the meeting did not record how each member voted, the United TTFA, including NFA representative Rayshawn Mars, had exactly six votes.

Wallace, despite his board’s lukewarm response to Ramdhan, then did his own thing, when the two men sat down to hammer out a deal.

“The president gets the okay [from the board] for the secretary and thereafter he negotiates with that person and the board is informed—so the contract has to be favourable to me,” said Wallace. “I don’t want to have to go back to the board in a year. And if the board says ‘no’, then I have to go find another secretary?

“The constitution clearly states that the secretary is not selected by the board, so I acted based on that.”

Wired868 asked Wallace why he did not even inform the board of Ramdhan’s new terms after the fact.

“Well, Ramesh’s contract was dealt with just before this Covid thing,” said Wallace, “and then came the normalisation committee and everything remained in abeyance. That is what happened.”

Ramdhan took up his duties by the start of the year and actually attended the TTFA’s next board meeting on 15 January 2020. Trinidad and Tobago had its first Covid-19 case on 12 March with the TTFA closing its offices a day later while Fifa appointed a normalisation committee in the twin island republic on 17 March.

Trinidad and Tobago Football Referees Association vice-president Osmond Downer, one of the framers of the current TTFA constitution, said, as president, Wallace has a large role in the choice of the organisation’s general secretary—but not nearly as much as he appears to think.

“The board has the authority to select persons for every post—coach, head of referees department, referee’s committee, etc—except the general secretary, which is appointed by the board on the proposal of the president,” said Downer. “[…] It is the only post where the president can get up tomorrow morning and say I cannot work with this general secretary and I am proposing to the board he should be replaced—and that is not just for the TTFA but for Concacaf and Fifa and everywhere else too.

“However, it is a fact that the board is the employer and therefore the board must know and agree to the appointee and the conditions of service of the appointee.

“[…] The president definitely has more say in the appointment of the general secretary; but if the president wants to change conditions that were approved by the board, he has to put it to the board and the board will have to agree to the conditions.”

Ironically, Downer said he urged the general membership to amend the constitution dealing with the general secretary last year—but, in a busy meeting, he could not get support from the floor to address it.

“My amendment would have cleared up that. I wanted the wording to say: ‘The general secretary shall be appointed or dismissed by the board—full stop. The candidates for employment can be proposed only by the president’…”

Still, Downer did have some sympathy for Wallace’s position since, in his view, a one-year term is too short for a general secretary.

Last year, the TTFA’s general membership insisted that John-Williams restrict his deal with David to that time frame—but only to ensure that his contract did not extend well into the term of a new president.

“If I was president, I would not want a general secretary for one year—if I have plans to implement things and I have just been given a four year term,” said Downer. “At the board meeting that appointed Ramdhan and decided on his conditions of service, Wallace should have said ‘I don’t agree’ and asked for a longer term. That was his big mistake.

“[…] But the end line is the board must agree with it. He should not have the power to decide on these things unilaterally.”

Wallace’s position now appears to have put him at odds with his own slate. However, Look Loy insisted the United TTFA release was not a sign that their group was crumbling; nor did it impact on their legal fight against the Fifa-appointed normalisation committee.

“The United TTFA’s position is the principle that the membership of the TTFA has the sole right to elect or to remove any officer,” said Look Loy, “and that is the position we have before the court… My personal view is I would like for the court to uphold the result of the [24 November 2019] election and then let the membership decides what to do with the administration—that is democracy.

“It is not up to me to ask anyone to resign… [But] we are not going to circle the wagons just because he is one of ours. We have a responsibility that is bigger than that.”

Wallace was unhappy that he did not have the opportunity to canvass the entire slate before Look Loy released the United TTFA’s statement. And at least one other member, Harford, was taken aback by its wording—and, in particular, the excerpt which said the current president’s behaviour: ‘replicates the performance of former president David John-Williams’.

Harford said he was on the way to a doctor’s appointment when Look Loy called and said he agreed to ‘scolding’ Wallace. But he felt the TTSL president went too far.

“I did give permission for my name to be on the release but I didn’t realise it would have been as strongly worded as it was,” said Harford. “I thought Keith would have sent it to us first but I suppose he felt our agreement meant he had permission to write a release that threw [Wallace] under the bus.

“William is a good and honourable man; and to even compare him to John-Williams is really unfair.”

Harford said that, in his opinion, the constitution supported Wallace’s decision regarding Ramdhan. And he felt that, even if the Avec Sport deal was a mistake, the TTFA president was ‘reacting to what was inherited’ and trying to find a quick fix to the mess left by his predecessor.

Harford said Wallace was totally culpable for the issues in Fenwick’s contract. But, he felt, it was not enough to ‘hang him out to dry’ after just over three months in office.

“I don’t know that the time has come to sever William Wallace’s head because he is an honourable man and I am deeply sorry about the wording of the statement,” said Harford. “I am not against us scolding Mr Wallace; [and] Keith was right to say that we have to always maintain the moral high ground. So I am really sorry about what has transpired and my view is that United TTFA members need to talk about what happens next.

“[…] But the Northern Football Association still believes concretely in Wallace. He is a man of strong integrity and I stand behind him.”

Look Loy, for the record, is not asking for Wallace to resign either.

“Wallace has his own view about how the constitution gives him authority and I told him he needs to articulate that to the public and the membership,” said Look Loy. “I don’t agree; but let the membership decide.”

The United TTFA has proposed a general meeting on Saturday, although it will be an informal one.

“The constitution says only the board can direct the secretary to call a general meeting,” said Downer. “[…] The present situation is ticklish, with a normalisation committee there is no board. The board has been replaced by the normalisation committee according to Fifa’s instructions, which have to be followed until it is decided otherwise [legally].”

Wallace, who did accept culpability for issuing Fenwick’s contract with terms that were not agreed by the board, said he welcomes a chance to share his position with the TTFA’s membership.

“At the end of the day, every man needs a chance to be heard [and] this [United TTFA release] was sent out and I didn’t have a chance to be a part of the discussion,” said Wallace. “I have no problem with them calling a general meeting, so we will get guidance from the membership in terms of where we go from here and to discuss these matters.

“The same way I am talking to you, I will get a chance to speak to the membership.”