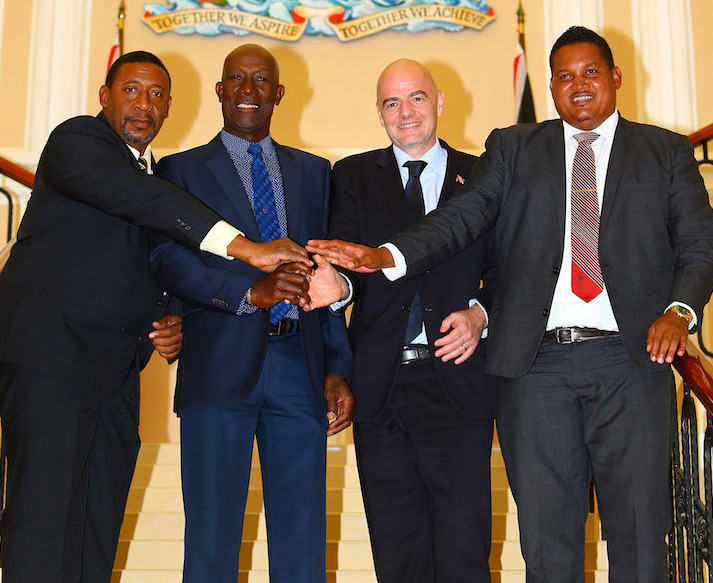 “[…] The continuing impasse—aggravated by the challenges of Covid-19—could effectively jettison the hopes and aspirations of thousands of young people throughout Trinidad and Tobago to improve their lives and their livelihood through football.

“[…] Now, with their dreams deferred, the youngsters could easily fall prey to the crime-lord lobbyists who are increasingly on the lookout for the idle and the frustrated to plunge their filthy and bloody hooks into…”

In the following letter to the editor, veteran journalist Errol Pilgrim suggests why the Trinidad and Tobago government cannot afford to sit on its hands while the TTFA and Fifa lock horns:

The protracted dispute between the Trinidad and Tobago Football Association (TTFA) and football’s international governing body, Fifa, will have a profoundly adverse effect on the lives of thousands of young people in Trinidad and Tobago as long as the dispute remains unresolved.

For this reason, the government must end its hands-off approach to the impasse before the national damage becomes irreparable.

It is obvious that the approach taken by the government has been in justifiable respect for Fifa statutes that frown on government interference in association football. But while it is mandated to govern world footballing activities, Fifa has absolutely no jurisdiction or dominion over the lives of the people in countries with associations under its control. That job is exclusive to the governments involved.

The way is therefore clear for government ministries such as those responsible for Sports and Youth Affairs and Social Development and Family Services to get involved—if only to seek to narrow the widening divide between the warring parties with a view to bringing an urgent and expeditious end to their differences.

The impasse between TTFA and Fifa has been ongoing since 17 March 2020.

On that day, in a decision reeking of colonial coercion, Fifa unilaterally removed the constitutionally elected executive of the TTFA and replaced it with a so-called normalisation committee headed by a local businessman.

The action appeared to have been more deeply rooted in Fifa’s succession politics than in its concerns about the parlous financial affairs of TTFA—a regrettable situation that did not suddenly arise in 2020.

Since 2017, the increasingly sad state of TTFA’s accounts was reflected in a consistent downward plunge of Trinidad and Tobago’s football, both in respect of its men’s and women’s incarnations, that signalled certain disaster. And though repeated requests were made between 2017 and 2019 for a Fifa intervention, the world body chose to do absolutely nothing at that time.

It is not for any government intercession to seek to determine the reason for Fifa’s sudden about-face in 2020 and whether or not the deposition of the duly elected TTFA executive may have had little or no bearing on integrity and fair play.

What the government’s concern should be more focused upon is that the continuing impasse—aggravated by the challenges of Covid-19—could effectively jettison the hopes and aspirations of thousands of young people throughout Trinidad and Tobago to improve their lives and their livelihood through football.

As the cheapest of international sports, requiring just a ball and the space to kick it around, football has traditionally attracted young people in the most marginalised communities in countries where the game is played.

With the imperative Covid lock-down and the TTFA/Fifa impasse, football remains in a moribund state in Trinidad and Tobago, delivering a potential death-blow to the discipline, production and tolerance that many vulnerable youngsters have had to employ to advance their football dreams.

Now, with their dreams deferred, the youngsters could easily fall prey to the crime-lord lobbyists who are increasingly on the lookout for the idle and the frustrated to plunge their filthy and bloody hooks into.

Compare this deflated state of football to the two eras, in 1989 and 2006, when the game actually ran the affairs of Trinidad and Tobago.

In 1989, our ambitious aspirations to compete in the 1990 World Cup in Italy were foiled by a single goal from the United States in a frantic Port of Spain match. In 2006, football again ascended to a state of overall national prominence when Trinidad and Tobago finally qualified as the smallest and least populated country to participate in a World Cup, this time held in Germany.

Particularly in respect of the Trinidad and Tobago experience, football has been one of the most common vehicles for financial success in the world. With its relatively minute population, this country has been in the forefront of the ongoing process that involves taking talented youngsters from all corners of the globe and turning them into wealthy athletes in affluent clubs in Europe and the United States.

Among the many success stories of youngsters realising such football dreams is the legend of Dwight Yorke.
Growing up in extreme poverty in Tobago, Dwight was the eighth of nine children in his family. The entire Yorke family lived in a humble two-bedroom house in Canaan. But Dwight was able to escape his family’s destitute circumstances and amass enviable quantities of wealth through his considerable football skills.

Now destined to become one of the few black football coaches in the English Premier League, Dwight Yorke would eventually seek to give back as much as possible following his escape from poverty.

The fantasy-like football sagas of people like Yorke, Russell Latapy and Shaka Hislop have fed the hopes and dreams of many youngsters whose parents appreciate the ability of sports facilities to attract children to school and keep them there.

And studies show that such youngsters tend to significantly improve their discipline and their concentration as well as their academic performance.

In pre-Covid 2019 when school football was flourishing, two past pupils of Trinity College East became the latest in an appreciable list of students to access football scholarships in the United States.

Earlier, four aspiring young footballers also set out to various American universities to take up full scholarships. The four players came from secondary schools across the east-west corridor and played major roles for their respective schools in the Secondary School Football League (SSFL).

Moreover, our young people have also been accessing scholarships in a number of sporting disciplines, including football, that are offered by the University of the West Indies and the University of Trinidad and Tobago. And, as in the case of Dwight Yorke and others, have been prized by talent scouts from all over the globe.

Today, all of the social progress that football inspires for our young people is in peril because of a prolonged row by some old people across different sides of the Atlantic, who may have never even played the game nor are any longer able to play it.

It is critical for the government to intervene, if only to tangibly restore in the young people of the sovereign state of Trinidad and Tobago the dreams that Fifa and TTFA now stand the chance of effectively cancelling.