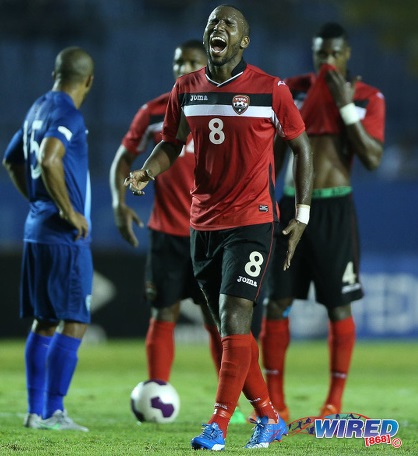 FIFA’s patience with the former leadership of the Trinidad and Tobago FA (TTFA) has inevitably run out. The world governing body tonight suspended the TTFA “with immediate effect and until further notice”.

The announcement came following the failure of the former president William Wallace (pictured left) and his United TTFA co-conspirators – Clynt Taylor, Sam Phillip, Susan Joseph-Warrick and Keith Look Loy (pictured right) – to meet the FIFA deadline of 3pm yesterday to provide evidence that the claim against FIFA in the Trinidad and Tobago High Court had been withdrawn.

Wallace provided an affidavit two minutes after the September 23 deadline asking for the case to be withdrawn, but included in it multiple allegations that FIFA had coerced him and his colleagues into withdrawing. No judge would grant a withdrawal on that basis. Wallace was foolishly playing a game with Trinidad and Tobago football he was destined to lose.

Calling FIFA’s bluff in an attempt to regain power has proved to be playing Russian Roulette while wearing a suicide vest – you might dodge a bullet but there is still a big bang coming. There was only ever going to be one ending to this story and FIFA let them blow themselves up. Sadly they have taken the rest of Trinidad and Tobago football with them. Theirs is a football legacy like no other.

Never in the history of football administration has such a short-lived administrative tenure – just three months in their case – resulted in such apocalyptic damage to the footballing fabric and ambitions of a footballing nation.

In a letter to Normalisation Committee chairman Robert Hadad, FIFA general secretary Fatma Samoura outlined the reasons for suspension and the extensions to the deadlines they had been given to allow them time to withdraw the Trinidad High Court proceedings.

The response from Wallace and Look Loy in particular has been arrogant and contemptuous towards FIFA at every stage of the process. They believed that FIFA’s law did not apply to them and that the governing body’s money was their entitlement. An increasingly strident claim when they actually had decision-making power but drove the TTFA deeper into debt without any credible plan to resolve the crisis. Their arrogance and belief that they were the ‘real’ TTFA continued even in exile as they challenged FIFA in the Trinidad and Tobago  courts.

“The Bureau (FIFA’s top decision making body) was informed that the institution and maintenance of those proceedings by these individuals, purporting to act in the name of the TTFA, in complete disregard for the FIFA Statutes threatens the very stability of the structure of football governance, both in Trinidad and Tobago and globally,” said Samoura.

Samoura said the TTFA suspension will only be lifted when:

•The TTFA acknowledges and confirms FIFA’s power and authority to appoint a Normalisation Committee subject to the right of the TTFA to appeal such a decision to the Court of Arbitration for Sport;

What this means immediately for the TTFA is that the opportunity to play in the US in the qualifying competition for the 2021 Gold Cup – where the country was pre-seeded – has been lost.

“.,. the TTFA will be deprived if all its rights as a member…neither the TTFA’s national teams nor its clubs will be allowed to participate in any international competitions. Additionally, this also means that TTFA and its members will not benefit from the FIFA or Concacaf financial/development programmes,” said Samoura’s letter.

Today is Republic Day in Trinidad and Tobago. On his social media Keith Look Loy has a poster saying that ‘I will celebrate Republic Day when FIFA leave my country’. FIFA has currently left, with its competitions, money and support – get the party started Keith, Wallace and the gang are on the way over. Most people would call that a wake.

Rogue ex-TTFA bosses continue on course of destruction as they abuse member wishes with court affidavit.
By Paul Nicholson (Insideworldfootball).

September 24 – The ‘United TTFA’ missed the FIFA deadline by minutes to apply to withdraw their case against the world governing, but the rogue former TTFA officials look to have deliberately sabotaged the chances of getting a withdrawal by submitting within the affidavit by William Wallace statements that they have been “pressured” and “coerced” to withdraw.

A notice for a discontinuation of legal proceedings in Trinidad and Tobago is a short, brief affidavit. By introducing Wallace’s (pictured) longer and emotionally charged affidavit, they are setting up for ‘coercion to withdraw’, a basis on which a judge would be very unlikely grant a withdrawal of the case.

For the United TTFA it would effectively set up a hearing that would in turn give them more time to lobby FIFA member federations for support that has so far been non-existent. It appears a deliberate attempt to escalate the battle with FIFA rather than help move TTFA football forward.

It would unlikely halt the next stage of FIFA’s suspension proceedings, or investigation into the multiple irregularities surrounding Wallace and his regime.

In his affidavit Wallace says: “It is the case that the members of the Executive and myself, have been under immense public pressure to ‘withdraw’ the claim. This does not mean to suggest that there is not support for the action we have taken but people are afraid that if we do not withdraw the action, FIFA will take punitive steps against Trinidad and Tobago.”

What Wallace doesn’t say is that FIFA has no objection to his challenging of his, and his board’s, removal, but that it should be done in the globally accepted sports courts with independent arbitrators who are specialists in sports malfeasance and disputes. Wallace and the former chair of the TTFA technical committee Keith Look Loy vociferously chose to withdraw from that process, instead saying they had a better chance of success in the Trinidad and Tobago courts with local judges – in itself a strong argument for the existence of the Court of Arbitration for Sport.

Wallace says that he has been advised by Counsel, Dr Emir Crowne, “that should any punitive action be taken by FIFA in respect of the membership of FIFA because the TTFA is engaged in a legitimate action before the Trinidad and Tobago High Court, this would not withstand objective scrutiny before any competent tribunal.”

This is correct but it is also grossly misleading as the TTFA’s statutes recognise CAS as the only competent tribunal for sports disputes – and at last look, this is a sports dispute whatever nationalist spin Wallace and his team put on it. Wallace and his cronies don’t recognise CAS as it doesn’t suit their somewhat manufactured narrative and attempts to cover up the reasons they were removed from office in the first instance.

Referencing an informal meeting of TTFA stakeholders he called, he says “many members were overwhelmingly of the view that FIFA is acting in bad faith (and in concert with Concacaf) to coerce the TTFA into withdrawing the claim against the Defendant. My firm view is that they are acting out of fear and not in the long-term interests of the TTFA.”

This is one of the most remarkable of Wallace’s assertions. It is not clear what FIFA has to be afraid of, it is merely following its own well defined statutes and procedures and in this case has never pretended otherwise – statutes that Wallace and crew refuse to follow but which are in their own laws.

However, he then acknowledges that the “majority of persons” (read ‘overwhelming majority’ and not all TTFA stakeholders were present or had been invited) were of the view that Wallace should withdraw proceedings. His affidavit follows that recommendation but in reality the text of his affidavit looks deliberately designed to achieve the opposite and is an abuse of the membership request he says he agreed to.

Wallace then references the draw for the Gold Cup that he says has never been held so early. Again, it is what he leaves out that is important. He fails to mention that this is the first time there has actually been a public draw for the Gold Cup and that for major competitions it is standard practice to hold the draw in advance of the competition for multiple commercial and logistical reasons. He then, somewhat incredibly, tries to tie this in with “a substantial injection of funds from FIFA” into Jamaica, “and these matters are unlikely to be a coincidence in all of the circumstances.”

Quite what he is alluding to is unclear as it is more likely Jamaica were in compliance for a release of funds that was due to them. Or perhaps he and his group just have their somewhat entitled hands out for FIFA money – the suspicion of most football observers.

Frankly, it is self-deluding of Wallace to believe he and his group have struck fear into the heart of world football as they have been removed from participating in it, and are not recognised by FIFA as football officials in any capacity.

Perhaps the most ludicrous part of his affidavit is where he says: “I believe this will be catastrophic for Trinidad and Tobago, and all small nations who may seek to challenge FIFA’s imperialistic ambitions in the future.”

Where once these islands had the dreadful and oppressive tentacles of the British Empire, now they would appear to have squadrons of FIFA attack forces massing off their beaches waiting for the greenlight to storm the House of Football, parliament, Police Commissioner Gary Griffith’s (a keen football fan) Ivory Tower, and impose house arrest and martial law on the country because it would not recognise the Court of Arbitration for Sport (CAS) as a competent sports dispute authority.

What Wallace forgets is that this is the country that has bent over backwards – and bent its own laws backwards – to prevent the extradition of football’s Most Wanted, Jack Warner, to the US to face multiple criminal charges of extortion, money laundering, bribery and graft. Not even US Navy Seals could get their hands on him… but watch out for that FIFA invasion people.

The links Wallace and his group – in particular Sam Phillip and Keith Look Loy – have with Warner has been well documented in local media. Rumours persist that Warner is paying their legal fees, though none of the named claimants in the case have confirmed this and refuse to answer any questions from Insideworldfootball. They have been very quick to speak to their local, friendly and primed domestic media in the battle for public opinion in Trinidad and Tobago.

However public and football opinion has turned against them as the realisation that a FIFA suspension would mean the removal of Trinidad and Tobago from the upcoming Concacaf Gold Cup, World Cup qualifiers and beyond. This was seen in the Wallace-called meeting of stakeholders that unanimously asked him to drop the court case.

His affidavit is a cleverly constructed catalogue of misinformation to keep United TTFA in a game they have been removed from. It also misrepresents the informal request from his former supporters to pull out of the court action – it is hard to find anyone who was ever really behind it.

Wallace at no point addresses the fraudulent activities that characterised their own short and destructive three months in charge that inevitably led to his forced removal by a FIFA Normalisation Committee. He has never answered the accusations of false contracts, dodgy dealers, election fraud, attempted construction scams and accounting malpractice. That is what really needs to be addressed. His answer to that is to blame it on the bloke before him. That is a smokescreen no-one has been fooled by.