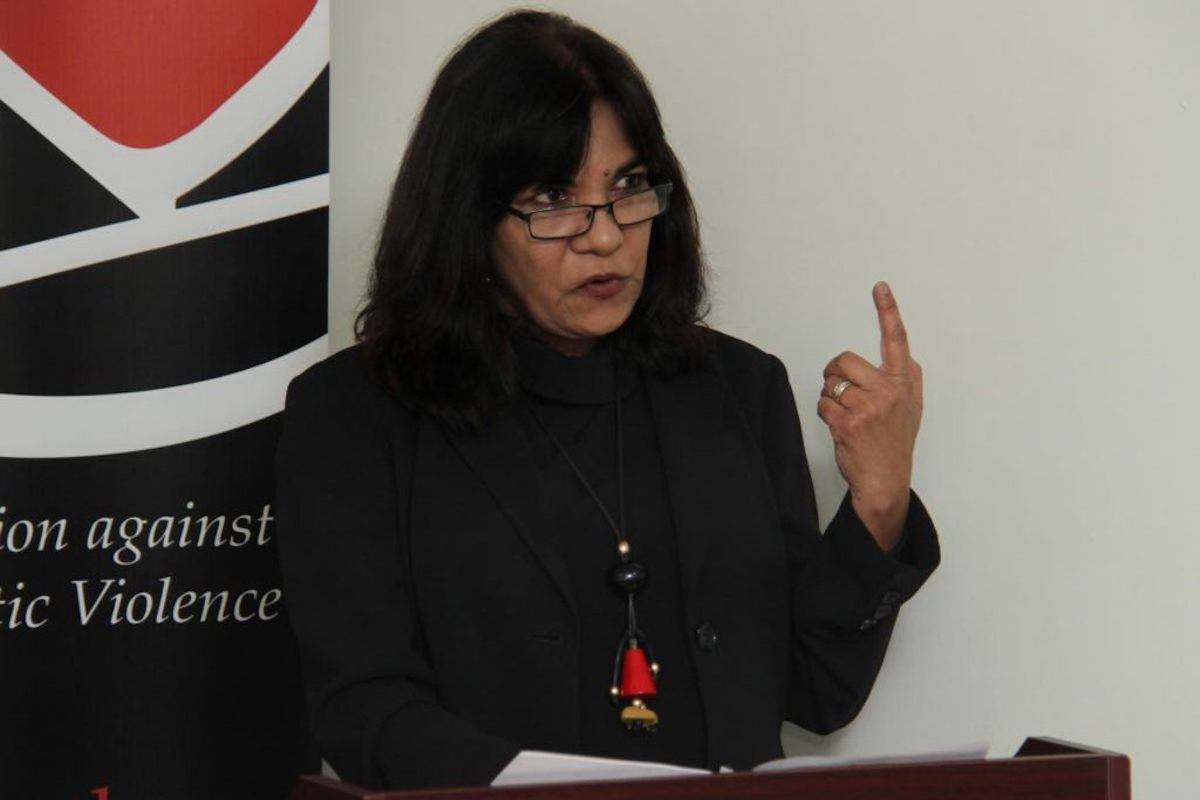 IT's a foul for FIFA.

In a late-night decision, Gobin ruled that the removal of the T&T Football Association’s (TTFA) duly-elected executive was illegal, null, and void and of no effect.

In her decision, which was e-mailed to attorneys just before 9 pm, Gobin declared the decision of FIFA to appoint the normalisation committee was made in bad faith and “for an improper and illegal motive.”

In March, FIFA removed the William Wallace executive (which includes vice-presidents Clynt Taylor and Joseph Sam Phillip) because of the TTFA’s increasing debt, which was $50 million.

The TTFA began legal action against FIFA, but then withdrew the matter at 3.02 pm (T&T time) on September 23, two minutes after FIFA’s final deadline. FIFA has insisted that the TTFA’s dispute should be heard before the Court of Arbitration for Sports (CAS).

FIFA suspended T&T from international competitions (both club and country) on September 24 for grave violations of the FIFA statutes, and the TTFA, in return, decided to reignite its legal challenge against the global governing body.

In her ruling, Gobin said the TTFA’s coming to the court for redress “was perhaps the only appropriate response which avoided capitulating to the demands of FIFA and thereby elevating the status of FIFA statutes above the laws passed by our Parliament.”

She also said the repercussions of FIFA’s suspension were “worrying,” as she listed what they were.

“One can therefore sympathise with the views of the many persons who believe that such far-reaching consequences should be avoided, perhaps at all costs.

“The wisdom of the challenge by the claimants of the actions of FIFA is not for the court. But it has to be said that the law expects the TTFA to do what its statutory duty requires even in the face of unlawful pressure.”

She said she was not insensitive to the anguish that the saga had wreaked on T&T.

“Our government, all sports administrators, clubs, players, aspiring footballers, young people, fans, I daresay the entire population is rightly concerned about the future of the sport.

“The request for the EGM identified the following grave and devastating consequences that the members who requested the meeting feared the fraternity would suffer if TTFA did not withdraw the action.”

However, Gobin did not accede to a request by the TTFA to find that FIFA’s interventions were orchestrated by its agents to undermine the matter before the court.

She also said of a plea by Sports Minister Shamfa Cudjoe, “I am not prepared to ascribe improper motives to the honourable minister for her intervention to “find a way forward” nor indeed to the delegates who requested the EGM. These were concerned parties who would not have been cognisant of the negative legal implications of their actions, which I do believe were well-intended.

“The same cannot be said for Mr Hadad. On the evidence, I am however left in no doubt that Mr Hadad, as FIFA’s appointee, was actively encouraging the campaign of pressure on the claimant, and this gentleman’s conduct is harder to ignore.

“I find that he, in his role as chairman of the normalisation committee, deliberately engaged in conduct that was calculated to subvert the adjudication of the claimant’s claim. His actions prompted the claimant to seek injunctive relief. FIFA did not resist the application.”

Gobin also noted that FIFA’s threats throughout were widely publicised and it encouraged, from many quarters, pressure and clamour for Wallace and his team to comply with the demands of the international body.

She also said there was a sustained unrelenting campaign against the TTFA, “the overt aim of which was to force, as a litigant before the courts of this country, to withdraw its case. Its threats were pointed. It is well settled that conduct which is calculated to impair access to the court is punishable as a contempt of court.”

She said the TTFA rules, which FIFA was aware of, already mirrored FIFA statutes and by its appointment of the committee to have it amend its rules to “bring it in line with FIFA statutes” were threats which the TTFA could not deliver.

The only amendment that can produce the result that FIFA command is an amendment to the TTFA Act, and if it insists on blocking access to our courts in favour of the CAS, then it should be put on notice there might be constitutional hurdles.

She again gave FIFA a dress down for its apparent derision of the local court’s jurisdiction.

“Throughout these proceedings, FIFA has persistently paraded its disdain for the authority of our local courts. In doing so it has demonstrated a disregard for the rule of law.

“The defendant’s conduct regrettably calls into question the sincerity of its vaunted commitment to achieving its objectives to promote integrity, fair play, and friendly relations in society for humanitarian objectives as well as its commitment to respecting internationally recognised human rights and striving to protect them. Disregard for the rule of law is inconsistent with these objectives.“

She also added, “If it is the case as FIFA continues to insist that it will not accept the jurisdiction of the court of any member country, and that CAS is the only dispute resolution forum that it will recognise then, given what the evidence has disclosed and which it has not denied, that FIFA generally does not comply with a basic rule regarding the payment its share of the costs of arbitration, even when its non-compliance can have the effect of denying parties access to the arbitration process, (as it did in this case) then there is every danger that FIFA will become a law unto itself if it hasn’t already become one,’ she said.

FIFA was ordered to pay the TTFA’s costs.

Wallace, in a Newsday report on Friday, vowed to stick to his word and immediately convene an annual general meeting with the TTFA membership to chart a way forward if Gobin’s decision goes in favour of the TTFA.

Delivering her judgement in the case, late last night, High Court Judge Carol Gobin ruled that FIFA’s move to appoint a Normalisation Committee led by businessman Robert Hadad to replace Wallace and his team was illegal, null and void and of no effect.

Gobin said: “The Court declares that the decision of the Defendant dated 17/3/20 to appoint a normalisation committee was made in bad faith and for an improper and illegal motive.”

She also ruled that FIFA’s Statutes which speak to the appointment of such committees did not conform with the local legislation which incorporated the TTFA and prescribes how it is governed.

Yesterday’s legal victory for Wallace and his team is only the first leg in their battle against FIFA.

Next Monday, the Court of Appeal is expected to hear an appeal from FIFA over Gobin’s jurisdiction to hear the case.

In the event, FIFA is successful in its appeal and Wallace and his team does not successfully challenge that decision in the Privy Council, Gobin’s decision would be rendered academic.

If Wallace and his team eventually emerge victorious, it would mean that FIFA’s indefinite suspension of the association, due to its pursuit of the case, would remain in place.

In her judgement, Gobin considered FIFA’s Statutes on the committee which state that it is to be appointed to member federations in “extraordinary circumstances”.

“The rule essentially gives FIFA a free hand. The absence of a definition does not however limit my ability to consider the circumstances of it and to determine the lawfulness of FIFA’s actions,” she said.

“I have considered the evidence and have come to the conclusion that the decision to invoke the normalisation was unwarranted and indefensible,” she added.

She said that FIFA attempted to usurp the power of the local legislation by directing the committee to arrange fresh elections.

In terms of FIFA’s insistence that all legal disputes between it and federations should be dealt with by the Court for Arbitration for Sport (CAS), Gobin noted that she already ruled that while courts usually defer to such arbitration clauses, they can make exceptions.

She also took the opportunity to criticise FIFA for its apparent disdain for the local courts through its actions in repeatedly refusing to recognise their jurisdiction for cases within the country.

“The defendant’s conduct regrettably calls into question the sincerity of its vaulted commitment to achieving its objectives to promote integrity, fair play, and friendly relations in society for humanitarian objectives as well as its commitment to respecting internationally recognised human rights and striving to protect them. Disregard for the rule of law is inconsistent with these objectives,” she said.

While Gobin said she recognised the effect of the case on the sport in this country, she suggested that it could be considered warranted in the circumstances.

“The TTFA’s actions in seeking redress before the Court was perhaps the only appropriate response which avoided capitulating to the demands of FIFA and thereby elevating the status of FIFA Statues above the laws passed by our Parliament,” Gobin said.

Gobin also considered the roles of TTFA members, Sports Minister Shamfa Cudjoe and Hadad in setting up a meeting of the TTFA to discuss the case.

While she ruled that Cudjoe and the stakeholders had good intentions, she said that Hadad did not and was seeking to further FIFA’s action.

She also noted that FIFA demand for local laws to be changed to conform with its in order to lift the suspension was unreasonable as only Parliament could do so.

FIFA was ordered to pay the executive’s legal costs for bringing the lawsuit.

Wallace and his colleagues were represented by Dr Emir Crowne, Matthew Gayle, Crystal Paul, and Jason Jones, while Christopher Hamel-Smith, Jonathan Walker and Cherie Gopie appeared for FIFA, which did not participate in the trial.