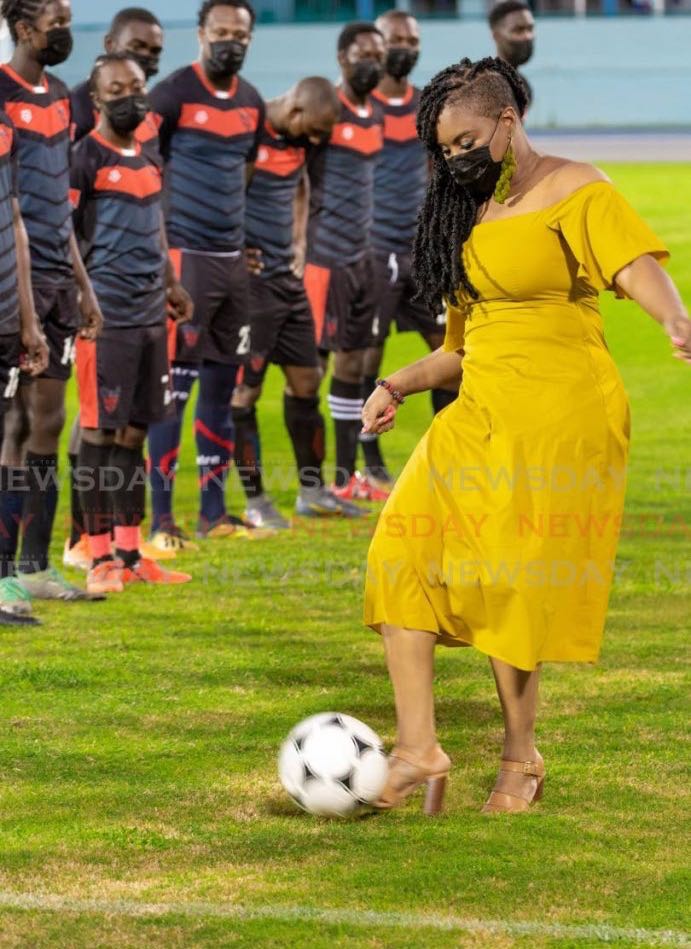 SHAMFA Cudjoe, Minister of Sports and Community Development, is excited over the future of T&T football.

Cudjoe was speaking during a video interview, issued by the TT Football Association (TTFA), on Monday.

The Sports Minister met with members of the T&T men’s football team, members of the TTFA and Commissioner of Police Gary Griffith on Saturday, after the TT squad defeated Orange XI of Tobago 8-0 in a warm-up match at the Police Barracks, St James.

The T&T squad are preparing for a pair of 2022 FIFA World Cup qualifiers, against Guyana on March 25 and Puerto Rico three days later.

“I was invited by the Commissioner of Police Gary Griffith,” said Cudjoe. “I’m thankful for the opportunity to interact with the guys and hear how passionate they are about the game, how they want to see the sport restored to its former glory, about getting ready for the international games. Like I said to them, football is everybody’s game, whether you have played (or) never kicked a ball in your life.”

T&T football made the headlines for the wrong reasons in 2020, as FIFA removed the TTFA executive, led by William Wallace, in March and installed a normalisation committee, headed by Robert Hadad.

FIFA also suspended the TTFA from September to October after the Wallace executive challenged their removal in the local High Court, instead of the Switzerland-based Court of Arbitration for Sport (CAS).

Cudjoe said, “There is a lot of rumbling taking place at this point, but I’m pleased to see that hope is still alive, that we have everybody on board, the stakeholders down to the Commissioner of Police, just trying to get in there and make the investment of their time and their talent.

“The Government continues to make its investment and support T&T football,” she continued. “We are going through a difficult time as it relates to covid. We look forward to all these new ideas towards the resurgence of football.”

The Minister recently held meetings with T&T coach Terry Fenwick, Griffith, Hadad and the Sports Company of T&T “to hear of some of their plans, what they are thinking about and the way forward for (T&T) football.”

Cudjoe added, “We can all move forward in a harmonious way. I’m excited and hopeful that we can get it together this time.”