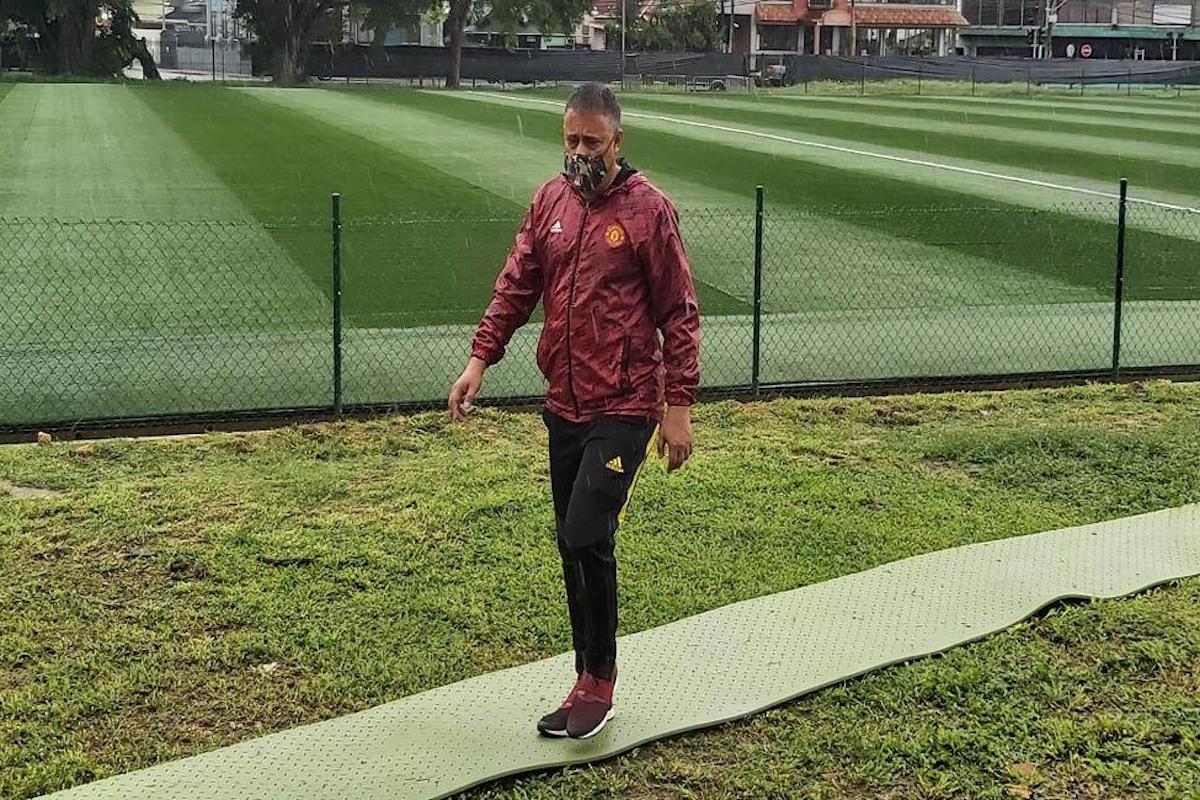 COMMISSIONER OF POLICE (CoP) Gary Griffith is predicting the new multi-purpose astroturf at the Police Barracks will be ready for action at the end of this month, before the restrictions on team sports are lifted.

At the St James-based venue yesterday, the 24 strips of the turf had already been laid on the sand-based surface, covering the complete area of the 59-metre width by 99-metre long area. The playing area itself is set to measure 55m (breadth) by 95m (length).

Griffith is overseeing the construction of a US$100,000 ($680,000) 3G multi-purpose astroturf, as part of his drive to revitalise the base of sports like hockey, football and cricket and as an anti-crime move to engage more young people in sports.

In an interview with the Sunday Express yesterday, Griffith—a former national senior men’s hockey team manager who was part of the team’s 2002 Central Ameri­can and Caribbean (CAC) gold medal effort—said the new turf, by internationally-renowned synthetic surface manufacturers CCGrass, will be ready for play after some additional sealing of the strips, fine-tuning of the drainage system, and the drawing of the demarcation lines for hockey and football.

“We will be also putting in bleachers and eventually lighting, so hopefully in a month or so we will be ready. I think we will be prepared to have sports played here before the restrictions will be lifted for sport. So as soon as the restrictions (are) lifted, we are ready to rock and roll here,” said the CoP, ­adding the venue will be a sports hub.

While the new turf may not arrive in time for the preparations of a handful of national hockey teams getting ready for international assignments starting later this month, in the long run it would compensate for the nearly-four-and-a-half-year delay—caused by both governmental bureaucratic processes and the travel restrictions imposed due to the Covid-19 pandemic—in the delivery of the Trinidad and Tobago Hockey Board (TTHB)/Sport Company of Trinidad and Tobago (SporTT) $1.3 million turf.

That surface was originally scheduled to be delivered and laid for the January 2017 FIH Hockey World League Semi-final Round at the National Hockey Centre in Tacarigua.

Griffith intends to offer the national hockey teams access to the Barracks astroturf and collaborate with the TTHB to have some of their competition games played there. It is the same offer he has made to the national senior team which has been utilising the refurbished North Ground field that borders Long Circular Road for their training sessions.

“The reason why I decided to do this is that for years we have seen T&T excelling in sport mostly because of raw talent, natural talent. That could only go so far now. These days now when it comes to international sport, raw talent could only get you so far,” noted Griffith. “What you need is good sport administration, finance, support, training, good coaching and above all, good facilities. We are behind the eight-ball as far as facilities. And not just facilities to cut a ribbon, but proper maintenance,” added the top cop.

Griffith claimed the TTHB erred in transferring hockey to Tacarigua and had a terrible track record of maintenance of the turf there.

“This turf here will do a lot to assist youth development and to assist our national teams. Our national hockey team even right now, they actually are training on the North Ground, which is easily the best football ground in the country because of a proper maintenance (programme and schedule).

“So this ground is going to assist our national team, moreso hockey and football but also to assist in youth development. It is also going to be a centre point for windball cricket, so the more facilities we have like this (around the country), the more it will help develop our sports.” Griffith emphasised.

The CoP added that this specific astroturf was ideal for the wet and dry season conditions of this country, enabling sport to go unhindered due to water-logged or bone-dry pitches. He added the savings in the cost of maintenance compared to that of a grass field was also a significant factor.

Fenwick said the turf is a game-changer for sport locally. ”This field will play perfect all of the time so I think this is a perfect step forward, brilliant from the Commissioner of Police and I am hoping that other sports will tag on and we will see several of these pop up around the country,” said Fenwick.

Govia said it was a massive project by the CoP; that is bringing significant sporting activity back to the North of the country, at a site that was once heralded as the “Mecca of Hockey.”

“We will have lights eventually so we will have sports day and night and it’s an all-purpose surface so hockey, football, cricket will enjoy the benefits of this surface,” pointed out Govia. “So we hope that this will be a stepping stone for some of the colleges -- those that make the big bucks when they have their fetes -- they could even invest and have their own development for the kids in T&T.”

Ali said it was a blessing for Griffith to deliver such a turf for the immediate community of St James.

“Born and bred over decades here in St James, we have not ever had a windball home. This will definitely be a mecca for windball cricket. It is also going to be a crime-stopper for St James, drawing people away from doing mischief and encouraging people to get involved in sport . So we feel like this will be the ultimate windball grounds,” Ali explained.

Francis said while the turf is not water-based like the still-to-be-laid 2G Polytan turf in Tacarigua, it is excellent for the development of junior and youth hockey.

“The one at Tacarigua was put down badly and had to be re-done. It is sickening to hear about and disgusting and the sport is dying that way. This will at least bring some life back into the sport. My concern is the young people who may get caught up with the bad and criminal elements out there. So we can bring them out and get them enrolled in some programmes and keep them occupied in a positive manner,” Francis opined.

The coach of T&T’s senior stickmen said the turf will also assist the national teams at the Central American and Caribbean (CAC) Games for the tough surfaces they often encounter in that part of the world. He added the turf will also rejuvenate the sports and camaraderie among the Trinidad and Tobago Police Service (TTPS) personnel through intra-competitions and activities.