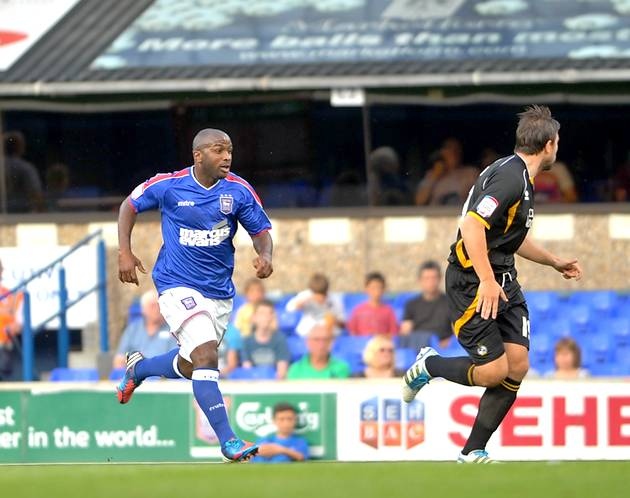 JASON Scotland still feels he’s got a lot to offer after Ipswich Town came to an agreement over the final few months of his contract.

The 33-year-old striker – now a free agent – has made just one appearance under new boss Mick McCarthy, slipping down the pecking order following the arrivals of David McGoldrick, Aaron Mclean and Frank Nouble.

“I spoke the gaffer and told him that I wanted to be playing football,” Scotland told the EADT.

“He’s been sound with me and I thank him for that.

“My chances were becoming limited at Ipswich and I want to be enjoying my football at this stage of my career.

Brought to Portman Road by Roy Keane in August 2010, for a fee believed to be in the region of £1m from Wigan, the former Trinidad and Tobago international made 59 starts and 38 substitute appearances for the Blues, scoring 21 goals.

“I’ve really enjoyed being at Ipswich and it’s just a pity I didn’t score as many goals as I think I should have done,” he said.

“The fans have been brilliant to me and so have the staff, chairman, chief executive and all the managers to be fair.

“I’d like to wish the club all the best for the future. I really think Ipswich can do something next season and be challenging at the top end of the table. The gaffer is building a really good squad and there is a really healthy competition for places. The training has been excellent.

“It’s been a privilege and an honour to play for Ipswich Town and I wish everyone associated with the club all the best.”

He added: “I’m just waiting to see what offers come in. I’m not putting any limits on what division or area I want to go, I just want to go somewhere that I can enjoy my football.

“Everyone knows that I like to play with a smile on my face and I want to enjoy the twilight of my career now and make the most of however many games I’ve got left. You have to treat every game as if it’s your last and appreciate your life as a footballer.”