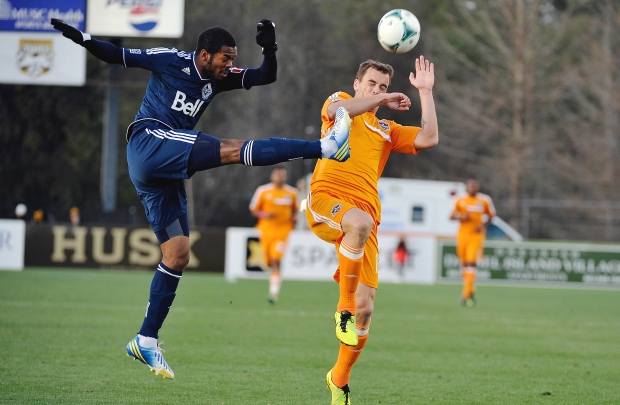 When Carlyle Mitchell first heard of the Whitecaps’ interest in him two years ago, he told the messenger to buzz off.

It wasn’t a slight. It was because Mitchell, then living in Trinidad, had never heard of Vancouver. He figured his former Joe Public F.C. coach, Derek King, was making it up.

“I thought it was a joke,” said the Trinidadian international, reflecting, after Tuesday’s practice at UBC, on how he ended up here.

“I didn’t get back to him. So he came to my mom’s house, and then got in contact with Marius (Rovde, the Whitecaps goalkeepers coach who’d coached at Joe Public), and then I realized this thing was serious.”

This season, Mitchell’s third in MLS, he’s proven that he’s worth taking seriously.

One of them, in May 2012, was a 4-1 loss at New England, a game in which Mitchell and Alain Rochat were ruthlessly exposed at centre back.

“I was lost,” said Mitchell. “That was one of my worst games ever.”

So, understandably, there were doubts — at least amongst fans — about his ability to adjust to MLS and its far quicker pace than Trinidad and Tobago’s domestic league.

From the club’s perspective, Mitchell began this season as a project. He was Martin Rennie’s fifth-choice centre back, behind Jay DeMerit, Andy O’Brien, Johnny Leveron and Brad Rusin.

The plan was for Mitchell to go on a season-long loan to FC Edmonton in the third-tier NASL, where the athletic 6-foot-2 defender had a big fan in former Caps’ assistant coach Colin Miller.

Instead, Caps centre backs soon lined up for the medical room and Mitchell returned in June.

He’s played 10 games, started eight — the Caps are 4-4-2 in those games — and no player on the roster has climbed the depth chart quicker.

“We always believed he was a very good player, an excellent athlete,” said Rennie. “Our concern was his concentration and his passing, but his concentration’s improved dramatically, his passing’s improved a lot, so when he’s doing those things along with the attributes he’s got — his ability to win the ball in the air, his recovery pace — then he’s someone who can be a starter for us.”

Mitchell’s rapid improvement has lessened the blow of all the injuries at the back. Rennie’s been forced to use eight different centre back combinations, but goal-scoring, of late, is the larger concern.

And the fact Mitchell and Johnny Leveron, the 23-year-old Honduran international, have a 4-1-1 mark together perhaps means the future’s arrived sooner than the club had anticipated.

The Caps have extended O’Brien, 34, through the end of 2014, while DeMerit, their 33-year-old captain, is coming to the end of his three-year deal.

DeMerit made a dramatic return from a torn Achilles in San Jose because O’Brien (back) and Leveron (calf) remained in Vancouver and Rusin (ankle) lasted just 30 minutes.

Rennie again plans to use Mitchell and DeMerit on Saturday in Montreal (13-8-6) as the Caps (10-10-8) try to close the five-point gap for the final Western Conference playoff berth.

For Mitchell, it will be another chance to prove how far he’s come this season.

Impact forward Marco Di Vaio leads MLS with 18 goals and has seven in his last five games. It’s the kind of challenge Mitchell’s relished since returning from an Edmonton stint that boosted his confidence.

“It was important growth,” he said, also noting the positive influence of Caps assistant coach Paul Ritchie, a former professional centre back.

There’s certainly no lack of motivation for Mitchell, one of seven kids from the northern town of Arima, 30 kilometres inland from the capital, Port of Spain.

Mitchell’s on Sykpe with his family every day and often sends home a quarter of his paycheque, or more.

“I’ve got to work hard,” said Mitchell, who’s heading into a club option year on a deal that paid him $46,500 this season.

“I’ve got to get something better so I can take care of my family back home.

“I’m the main part of their life right now because I’m playing football and can send money for them. If they need something, I don’t mind sending my whole paycheque.”

Communicating with his Whitecaps family in his speedy singsong accent remains more of a challenge.

At halftime in San Jose, Mitchell tried to tell Rennie that an Earthquakes player was blocking him off to free up San Jose’s big man, Alan Gordon.

“Martin said ‘What? What did you say?’ But I was speaking fast,” said Mitchell, who got a little help relaying his message through Caps midfielder Nigel Reo-Coker.

“If me and Darren (Mattocks, the Caps Jamaican forward) have a conversation, you guys won’t understand a thing.”

On the field, though, Mitchell’s play has spoke plainly enough. He’s rarely required bailing out this season; in fact, his pace has covered for others.

“He’s come back (from Edmonton) and hardly put a foot wrong,” said Rennie.

But there is one area of Mitchell’s game that’s yet to shine, and it’s one that Rennie would love to see blossom in the final six games.

Few MLS players get up as high as Mitchell, but he’s yet to score. He should be a consistent threat on attacking set pieces.

“It’s just timing,” said Mitchell, who, like most Trinidadians his age, grew up cheering for Dwight Yorke and Manchester United.

“You can have all the technique in the world, but if your timing is off, it doesn’t make a difference.”

Timing’s been the story of Mitchell’s season. It seems that he went to Edmonton at the perfect time, and returned to Vancouver at a good one, too.

It’s been a season of opportunity and confidence-building for Mitchell, though, like every other Whitecap, time is running out to make a playoff push.