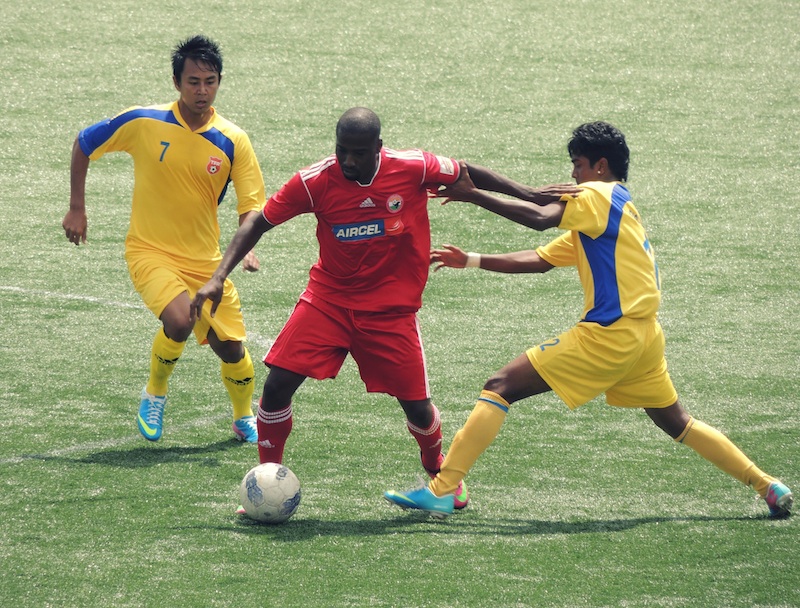 Shillong Lajong FC routed Mumbai FC 4-0 in the final group C fixture of the Federation Cup at the Jawaharlal Nehru Stadium, Kochi. Cornell Glen was the star of the evening with a hat-trick while Boithang Haokip also chipped in with a goal.

Thangboi Singto made four changes in his first 11 while bringing goalkeeper Vinay Singh back in action after Lalthuammawia Ralte saw six goals go past him in the last game.

Khalid Jamil also made a change of personelle between the sticks, starting with Kunal Sawant in place of Nidhinlal AC, while making four other changes.
The first chance befell Mumbai FC as Climax Lawrence released Henry Ezeh on the left who went past Wailadmi Passah and his shot came off the far post before goalkeeper Vinay Singh came to the rescue.

In the 15th minute, Mumbai FC goalkeeper Kunal Sawant was adjudged to have brought down Cornell Glen by referee Umesh Bora after the custodian had saved a shot of Subhash Singh. Glen coolly dispatched the spot-kick and gave his side the lead.

Midway into the first half and the north eastern outfit doubled their lead when Robin Gurung’s pass to Boithang Haokip saw the latter’s shot find the back of the net which goalkeeper Sawant having no chance.

Thereafter Ezeh and Lawrence had a couple of half-chances but the Mumbai FC players failed to convert them as the two teams went into the break with Lajong leading 2-0.

It took Lajong eight minutes in the second half to find the back of the net for the third time as Glen picked a long ball by Subhash Singh and despite being under pressure from two Mumbai FC defenders, he found the back of the net. The move was initiated on the counter after Vinay Singh had kept out an attempt by Yusif Yakubu.

The Lajong goalkeeper managed to keep a clean sheet for the second time in the tournament while frustrating the likes of Ezeh and Jayesh Rane in the second half.

In the 74th minute, Bipin Singh's cross to Seikhohao Tuboi saw the latter's header blocked out by Sawant as the Lajong substitutes combined well.

Bipin was also guilty of missing another good chance in the 87th minute when he mistimed his side volley after receiving a cross from the right by Samuel Shadap.

To top it off, however, Glen curled in a flat free-kick into the right bottom corner as the northeastern side fell short of a goal in order to keep their hopes alive.