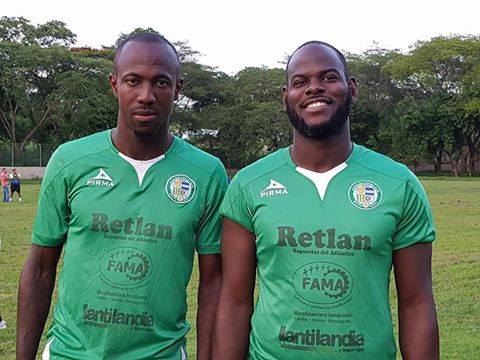 Trinidad and Tobago Senior team defender Daneil Cyrus made his first appearance for Honduran La Liga club Juticalpa FC on Saturday, running out for the full ninety minutes in a preseason encounter against fellow League side UPNFM.

T&T goalkeeper Jan-Michael Williams also saw action, entering the match at the start of the second half as Juticalpa finished the match without conceding.

Cyrus signed a one-year deal last month with the option to extend and appears to be settling in at the club, although his spanish speaking skills may not yet be as good as Williams who held his own fairly well during an interview on camera with a Honduran reporter last week.

“I am not as good in Spanish as Jan as yet but so far things have been very good at the club,” Cyrus told TTFA Media

“We had a game on Saturday in which I played the full ninety minutes and Jan came on for the second half. The players and the staff have embraced us and made us feel very comfortable. And the fans have been good so far.

“The league starts at month end but the preseason preparations have been intense and there is a lot happening. Before coming here, I heard a lot of good things from Jerrel Britto and  being here now, I have seen it for myself that the clubs are very organised and at our club in particular the level is good. I think it’s definitely a step up for me and I am looking forward to a good, solid season,” Cyrus added.

T&T’s next World Cup is at home to Honduras on September 1st with both teams seeking full points to maintain their qualifying chances. T&T needs to capture the win before moving on to Panama City to face Panama four days later.

“At the moment I think everyone understands the importance of that game against Honduras. Both myself and Jan can sense here also that they (the Hondurans) know how big the match it is and of course they know us as national players from Trinidad Tobago as we played here last year. But for us, the focus while we are here,  is Juticalpa and doing well in the league. So far the people here have welcomed us and we are part of them.

“But the focus for us is also the Honduras game which is in the back of our minds at the moment. We are working hard on our fitness levels and always trying to better our game to take to the national team when we are called for duty. We are always working towards being at our best and it’s going to be no different for those two games in September,” Cyrus added.

Cyrus at age 26, has made 68 appearances for T&T and is on his fourth overseas deal, having previously played for Chicago Fire and Sporting Kansas in the MLS as well as Hanoi T&T in Vietnam in a professional career that dates back to 2010 with him having played for FC Santa Rosa, Joe Public, Caledonia AIA and W Connection.

“At the moment I think my game is at a decent level but there’s always work to be done. I think the last few weeks with the national team has been good for me, working under the head coach (Dennis Lawrence) and taking things on board in every session. We were a bit unlucky with the two results but we have a lot of reasons to believe we can turn things around in the next two games,” Cyrus added.