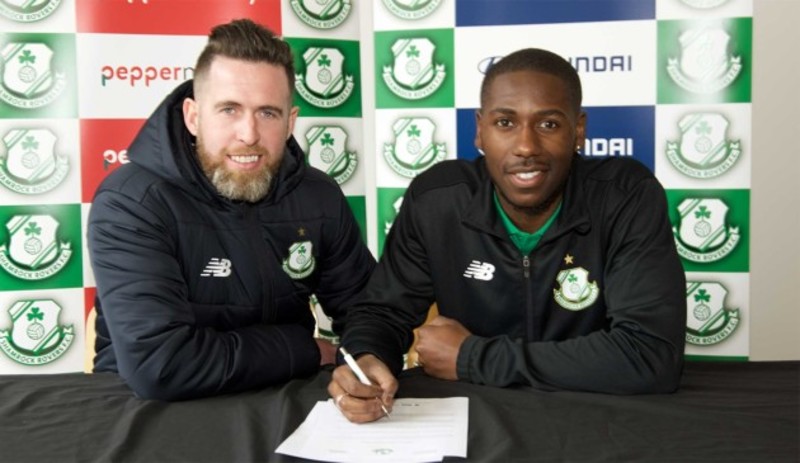 A QUICK GLANCE at Daniel Carr’s Wikipedia page, and you might be forgiven for deducing that he is someone who likes to move around a lot and doesn’t tend to settle very well.

At the age of 24, Shamrock Rovers have just become the striker’s 12th senior club in six years — although, as the Londoner points out, only half of those were on permanent deals.

“I’ve had a lot of clubs but if you look at it, most of them have been loans,” he told The42 yesterday. “It looks like I’ve had many but it’s actually not that much.”

For a player who was sought after by some of England’s top sides as a teenager, Carr appears to have lost his way somewhat in recent times.

So how did he wind up in the League of Ireland?

Raised in Croydon as part of a close-knit family, Daniel was involved in athletics, swimming and gymnastics as a boy but none of them came close to his passion for football.

He remembers getting to the age when it’s time to start following one club, and being told to rethink the decision by his mother.

“When I was younger, I liked Man United but she said she’d make me leave the house if I didn’t support Arsenal,” he recalls. “She was joking but I didn’t know that at the time.”

His older brother Gary would go on to pursue a career in acting and starred as jazz singer Jack Ross in Downton Abbey before being cast in the role of CC, a ruthless pimp in HBO’s hit series The Deuce.

Carr, back then a tricky winger, joined the centre of excellence at Wycombe Wanderers at the age of 14. But that lasted six months and it was at Reading where he worked under the late Eamonn Dolan.

After two years, however, Carr found himself in the seventh tier of English football with non-league side Dulwich Hamlet, while making ends meet by working on a building site with his uncle.

The manager, Gavin Rose, moved him from out wide into a more central forward role, and something clicked.

“I had a great season there,” Carr, who was involved with Trinidad & Tobago at underage level, explains. “I had played on the wing but at that club transformed me into a striker. That’s when I started scoring loads of goals and Dulwich won the league for the first time in years, so it was good to be a part of that.”

Despite that fact the he was plying his trade outside the Football League, 25 goals in the 18-year-old’s debut season prompted clubs all over Britain to stand up and take notice.

The likes of Chelsea and Liverpool were reported to be interested, and Carr went on trial with Chartlon Athletic but both parties couldn’t agree a fee. He was then offered the chance to impress at the Reds, who were at that time manager by Brendan Rodgers — the man in charge of Reading’s first team during his spell there.

Thrown into a reserve game, he lined out alongside the likes of £50 million man Raheem Sterling, AC Milan schemer Suso and Jonjo Shelvey, now of Newcastle United. Although Liverpool didn’t see enough to pursue a deal further, Championship outfit Huddersfield Town put a two-year deal on the table and it felt like a no-brainer.

Life with the Terriers began with a hint of promise as he was named on the bench several times and made cameos in the league against Wigan and Birmingham City, before Fleetwood Town took him on loan.

But things were to turn sour after a falling out with Huddersfield manager Mark Robins.

“In my first season, I played twice in the league, once in the cup and I was on the bench quite a few times,” he says.

“In my second season, there were a few things said by the manager that I didn’t appreciate. They were personal things that I won’t mention now. That’s the reason I didn’t continue there and they sent me out on loan again. I knew from then on it would be uphill so I had to find a new club.”

By 2015, Carr was signed by Cambridge United but the manager got the sack and, again, loan moves followed — this time to Aldershot Town and Woking. He then returned to the club he has enjoyed most success with a year later, agreeing to a second stint at Dulwich Hamlet.

But they farmed him out to Leatherhead, who were managed by one of English football’s most unmistakable characters in former Wigan Athletic, Hull City and Fulham midfielder Jimmy Bullard.

“He was the best, I really enjoyed my time there,” Carr says of the Soccer AM presenter. “With Jimmy, people think he’s a joker and that but he is really serious. He knows his football.”

Last year, the opportunity arose to go to Sweden to play in their second tier with Karlstad BK, and he accepted.

“I loved it there,” he says of the Swedish experience. “It’s a different culture and I met some lovely people. The football wasn’t as high a standard but I learned from the manager.”

Rovers boss Stephen Bradley had recently been in the market for a centre forward when a former team-mate got in touch to flag Carr’s availability, and he travelled with the squad on their pre-season trip to Portugal. Bradley has said since that he saw enough on his first day training to convince him to take a punt, and the player is keen to repay that faith shown while attempting to get his own career back on track.

Carr’s first experience of the League of Ireland was as a second-half substitute in last Friday’s Dubin derby defeat to Bohemians at Dalymount, and he will be hoping to play some part at home to Dundalk this evening.

“I’m a bit of an all-rounder,” he replies, when asked what he can bring to the team. “The main thing as a striker is that I need to get goals. If I’m not scoring then I’m not really doing my job.

“The minimum is to work hard and every one of us will be doing that.”

Bradley added: “I think he showed a little glimpse last week when he came on against Bohs. He’s very hard to play against as his feet are really good. He’s different to a lot of players in this country in terms of his feet. He’s really tricky around the box.

“It’s about feeding him at the right time. There’s no doubting what he has and what he will bring to us.”

Hoops captain Ronan Finn faces a late fitness test for the game after picking up a knock a week ago, while Trevor Clarke is suspended once again. They are also hoping international clearance goes through for latest arrival Sean Kavanagh.

“He’s a player of real high quality and I think we’ll see that,” Bradley says of the former Fulham full-back. “You only have to watch him in training and you see the quality that he has.

Goalkeeper Kevin Horgan was named in the starting line-up against Bohs ahead of last season’s number one Tomer Chencinski, but his mistake for the home side’s third goal has been roundly-criticised.

“They’re both competing,” Bradley says on his two stoppers. “I’ve said that no one is guaranteed a jersey here, I don’t care if they’re 33 or 23. I’ve said from day one that if someone is training harder or better than the other person then he will play and that was the case last week.

“I thought Kevin did very well. The third goal, he should have stayed on his line and caught it. The other two, Pico [Roberto Lopes] loses his man from a corner and the other one is a flick on to Paddy Kavanagh and our defence is all over the place.

“Kevin can’t affect either of them. If we don’t have that ten-minute meltdown, we walk away with a win and we’re not talking about Kevin. But we shot ourselves in the foot.”

For Dundalk, who come into the game on the back of a frustrating 0-0 draw with Bray Wanderers on the opening night, experienced defender Brian Gartland has returned to the squad along with Lithuanian midfielder Karolis Chvedukas, and new signing Marco Tagbajumi is also available.

Captain Stephen O’Donnell (calf), Sean Hoare (hamstring) and John Mountney (knee) are all out, however.