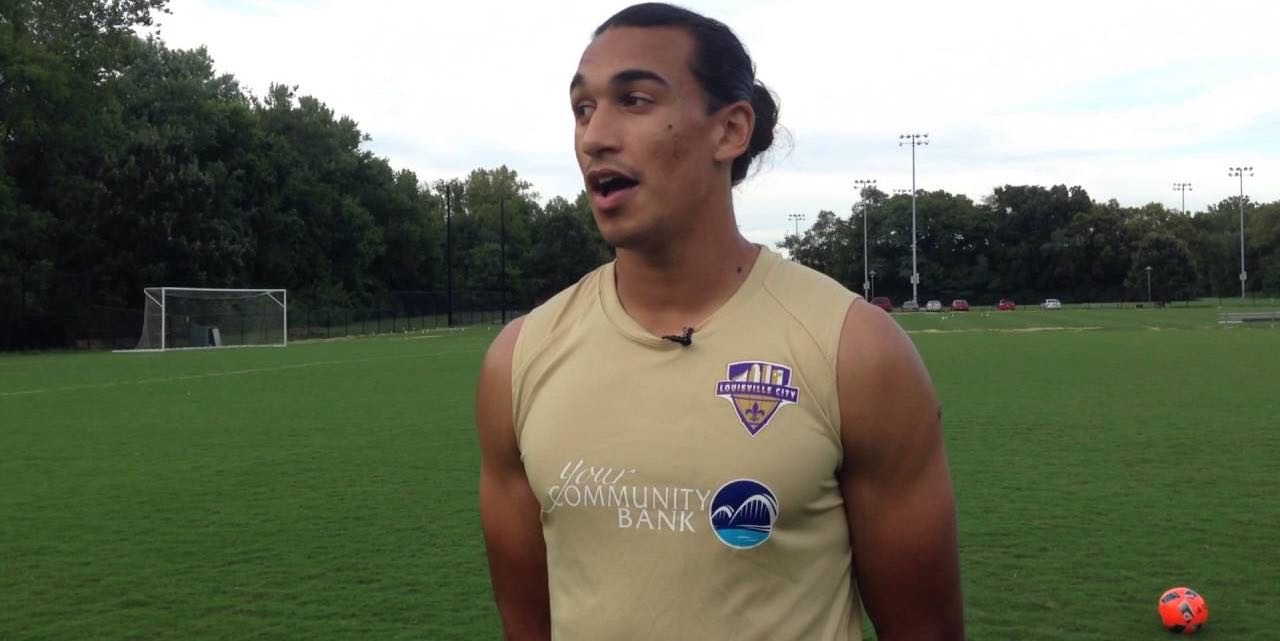 At Mercer University, Gregory (Greg) Ranjitsingh finished his highlighted collegiate career as one of the top keepers in the country.

Then fresh out of University where he was a four-year starter, playing 81 matches with 363 saves and 27 clean sheets drew close attention. The Canadian-born goalkeeper was snapped up by Louisville City FC (Lou City) in 2015, a team that was about the make its début in the United Soccer League (USL).

At Louisville, Ranjitsingh's first season saw him bench ridden biting his nails hoping for the day he'd be the number one choice for Lou City and, it came. His second season painted a different picture. A suspension to the club’s first choice goalkeeper Scott Goodwin, gave Greg the opportunity that he grabbed with both gloves. He took over the starting role for the USL club, opening with a string of five clean sheets and has remained in-goal ever since. He finished his 2016 performance that saw him post a 0.74 goals-against average and .759 save percentage.

The following season, Greg continued where he left off and was a brick wall in-goal for Louisville as he recorded 11 clean sheets and a 69.6 save percentage and claimed the Fan’s Choice Save of the Playoffs. He finished his career with the USL team making 81 appearances in-goal and recorded 33 shutouts since signing in 2015.

With a couple of Man-of-the-Match performances, some penalties save and a USL Team of the Week selection caught the eye of Orlando City SC, which ultimately led to the T&T custodian being scooped up by the MLS club in December 2018.

Ironically, Greg made his home Slugger Field début for Louisville against Orlando City. He came on as a second-half substitute that saw the home team defeating the MLS team 3-1 that left them shell shocked.

Ranjitsingh, who qualifies to play for Trinidad & Tobago through his father, can also represent Guyana, Portugal or Canada but chose to wear the red, black and white. He earned his first call-up for Soca Warriors under former head coach Stephen Hart back in August 2016. T&T had to face Guatemala at home and the United States (away) in their penultimate 2018 Concacaf World Cup Group C Semifinal Round qualifier.

Greg never made it off the beuch. T&T tied Guatemala 2-2 in their first game which was enough for them to booked a spot for the final stage Hexagonal (Hex). The remaining game against the US was literally meaningless as far as qualifying goes. Coach Hart stuck with his number one (Marvin Phillip) between the sticks only to see his side fall 4-0 to the CONCACAF powerhouse.

In November 2017, the Ontario-born keeper was again called up, this time by current coach Dennis Lawrence for a pair of exhibition matches against Grenada and Guyana. However, Greg was excused due to his club’s qualification for the United Soccer League Cup Finals. Ever since and 6 T&T games later, the player was never called-up again and is yet to earn a T&T cap.

To date, there are only three T&T players and one potential candidate (Ryan Telfer) playing in the MLS, Greg Ranjitsingh, Justin Hoyte (2019) and Kevin Molino.

Since 2016, Greg, still only 25, has made tremendous stride and consistent progress and with the aging Marvin Phillip (34), Adrian Foncette (30) and Jan-Michael Williams (34), Greg deservedly warrant a T&T call-up as one for the future, hopefully, coach Dennis Lawrence will make the call soon.

Soca Warriors Online (SWO) reached out to Greg and the player was all but happy to tell us about what has been happening lately in his career, from his T&T stint to his soon to be MLS exploits.

1. First, congratulations on your move to the MLS with Orlando City. How do you feel about the move, the environment, your new teammates, training and do you think you can hold down the number one spot being that it's a higher level to what you are use to?
GR: I’m very excited about the move. I’ve worked with James O’Connor, Daniel Byrd, and Thabane Sutu before in Louisville, and i’m very happy to link back up with them in Orlando. I’m looking forward to this challenge and i’m extremely confident in my abilities. I think the transition to playing in the MLS will be seamless and that I will continue to perform at a top level.

2. Greg, are you still interested in representing Trinidad and Tobago?
GR: Right now I would like to focus on my club football. If a national team call-up comes, I will deal with it accordingly.

3. How was your first stint with the T&T senior team? What impressed you the most, how did the players accepted you, how did you rate the other keepers and what did you feel could have been improved.
GR: I really enjoyed my first stint with the national team. It was a new experience for me and I thought the players accepted me in to the team and made me feel comfortable. My first call-up was with Marvin Phillips and Adrian Foncette, who I really enjoyed working with. I thought the level we maintained in training was great.

4. Do you still follow the T&T senior team? And has head coach Dennis Lawrence been in-touch with you?
GR: I always follow football, whether it is the national team, club football, or whatever. I have a love for this game and I stay fully aware of everything that is going on. I have not heard from Dennis Lawrence or any other T&T staff since right after the USA match when I thanked them for having me in camp.

5. Finally, SWO (socawarriors.net) and all of its supporters are hoping to see you suit up for T&T soon and would also like to congrat you with winning back-to-back USL Cup titles with Louisville City FC as well as your move to the MLS. Do you have any words for them?
GR: I want to thank all the supporters of the Soca Warriors. I see all the the nice things they write about me and I really appreciate the support they have shown. My wishes are for the federation to resolve their issues so that the players can proudly represent the country without any off the field distractions. The country and fans deserve top football and I know that is what the players want to provide.