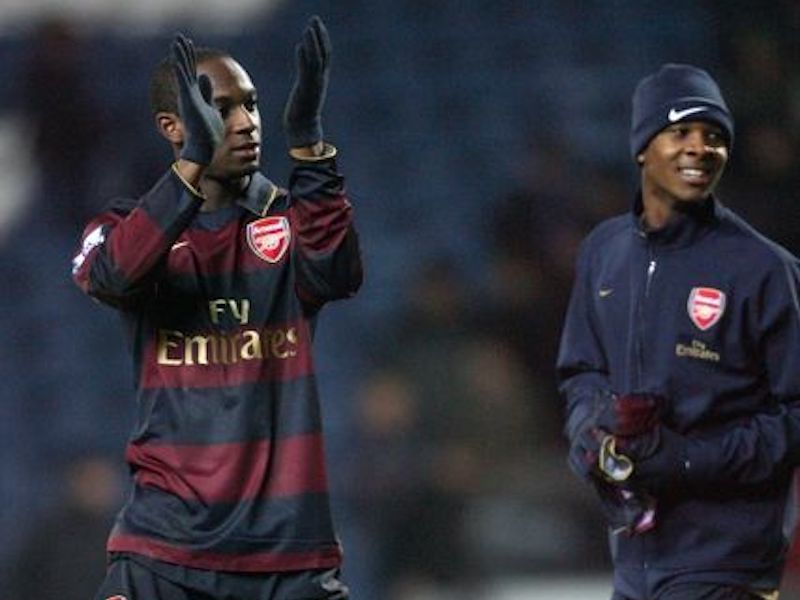 Welcome to Last Word on Football’s ‘Families in Football’ series. Over the next few weeks, we take a look at siblings, cousins and even parents and children that have played the beautiful game. Some have played cup finals together while others have been on opposing sides. Today, we focus on brothers Justin and Gavin Hoyte.

Defender Justin Hoyte came through the Arsenal academy after joining as a nine-year-old and worked his way into the first team under Arsene Wenger. The right-back signed a professional deal and made his debut as a late substitute in a 6-1 win over Southampton a year later.

Justin played in the 2004 Community Shield victory over Manchester United and made his first Gunners start in a 4-1 win away to Norwich City.

Hoyte was linked with a move away from north London to Ipswich Town but Wenger wanted to keep the full-back in the Premier League. Instead, he joined Sunderland on loan and scored one goal from 31 appearances, which came against rivals Newcastle United.

Upon his return to Arsenal, Justin netted his first Gunners goal in a 4-0 win over Charlton Athletic. He ended the season with 36 appearances but a League Cup final defeat to Chelsea.

Hoyte moved to Middlesbrough in 2008 but was unable to help the club avoid relegation from the Premier League. Despite that, the defender stayed at the Riverside Stadium for five seasons before returning to London to join Millwall.

This was where his career in England began to peter out, making just a handful of appearances for the Lions and Dagenham & Redbridge before moving to the United Soccer League, where he spent two seasons with FC Cincinnati.

Despite making 58 appearances for England at various youth levels, Justin represented Trinidad and Tobago at senior level. He earned 18 caps and came as runner up in the 2014 Caribbean Cup.

Similarly to his older brother, defender Gavin Hoyte was also part of the Arsenal academy, although his stay in north London wouldn’t last as long.

He made his first-team competitive debut in a 6-0 League Cup win over Sheffield United. The defender also played against Wigan Athletic and Burnley in the same competition before making his Premier League debut against Manchester City.

That would be his fourth and final appearance for the Gunners before spending time away on loan at Watford, Brighton & Hove Albion, Lincoln City and AFC Wimbledon.

He finally left north London and joined Dagenham & Redbridge in League Two, where he made 77 appearances over two seasons, before moving to Gillingham in League One.

The defender spent one season in Kent before turning out for Barnet, although injury limited his game time. From there, Gavin dropped into non-league and played for Eastleigh, and Dagenham again and Maidstone United, where he still plays.

Games Played Together and Against

Justin and Gavin Hoyte have played just two times together, with both matches ending in defeat for Trinidad and Tobago. They have never been on opposing sides.

Justin and Gavin Hoyte are the sons of British sprinters Wendy Hoyte and Les Hoyte (who was born in Trinidad and Tobago). Their uncle, Trevor Hoyte, reached the 200m final at the 1978 Commonwealth Games and their cousin, Chris Clarke, is also an elite sprinter.

Justin made one league appearance in Arsenal’s 2003/04 Premier League-winning season, which was not enough to qualify him for a medal.

On his first start for Arsenal, Justin conceded a penalty in the Gunners’ 4-1 win over Norwich. His first Arsenal goal against Charlton was the first scored by an Englishman for the club at the new Emirates Stadium.