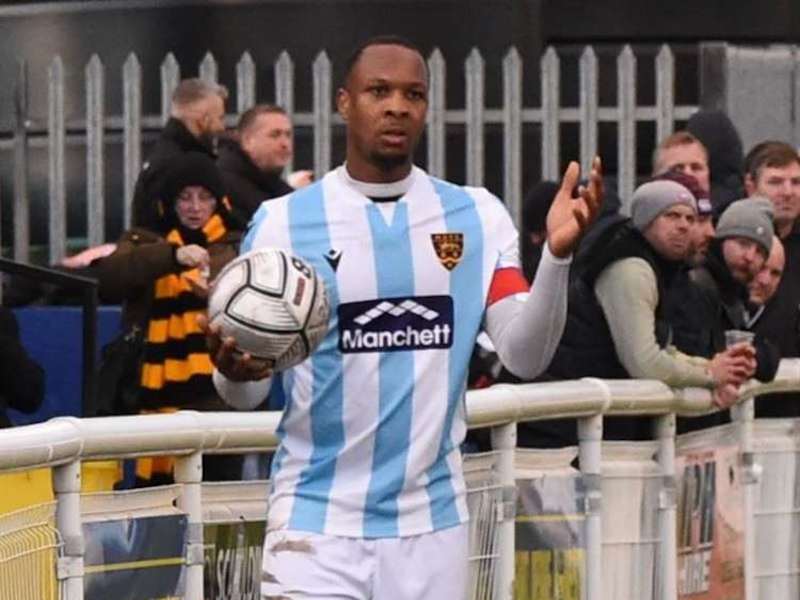 Hoyte has had the armband throughout the Stones’ 11-match unbeaten run in National South, with Elokobi sidelined since the end of October.

The right-back, named vice-captain after signing from Dagenham three years ago, hadn’t always fared too well when deputising in the past.

But he appears to have cracked it this time, helped by words of encouragement from Elokobi, who celebrated his 36th birthday this week.

“It’s a funny one because the first year I came here, George got injured and I was captain and it didn’t go too well the first few times,” said Hoyte, 31.

“But this year has been a big change, everyone’s doing well and I’m loving every minute of it.

“Hak’s (manager Hakan Hayrettin) always on at me about talking more and being more of a leader on the pitch and that’s what I try and do.

“I’m always speaking to George. I’m fortunate enough to have someone like him.

“I drove in with him for the first two years so I’m learning off him every day.

“He’s a brilliant guy to have around, I don’t think I could have a better person to learn from.

“Even when we were having a bad run when I was captain, he was always giving me a call to see how things were because I felt like it was myself, what was I doing wrong?

“I had some words with him, what can I do better? He’s been a massive help throughout everything.

“The best advice he’s given me is keep being confident, keep the boys going, they go off of your vibe so just try and lead by example. That’s what I try and do.

“It’s brilliant to be captain of this team. I’m loving every minute. I’ve always wanted to be a captain.

“I was captain when I was younger at reserve level at Arsenal but I’ve always wanted to be captain and I’m fortunate enough to be captain of this great team and we’re doing so well, which makes it even better.

“You’ve got to enjoy it and that togetherness, I think that’s why we’re doing so well as well. We’re all fighting for each other.”

It’s a first Saturday home game of the year for Maidstone this weekend when they take on Bath City.

They’re looking to complete the double over the Romans, having won 3-0 at Twerton Park in October.

“I think this is the best run of my career, I don’t remember another team doing so well,” said Hoyte, whose side came from a goal down to beat Concord 5-1 last weekend.

“The first half at Concord wasn’t great but we got round each other at half-time, helped each other, had a few words and got the result we deserved in the second half.

“We need to keep everyone level-headed and make sure that first half doesn’t happen again.

“That same goal as when I first joined is still there, to win something.

“We’ve got to keep doing what we’re doing and you never know where it takes you.”