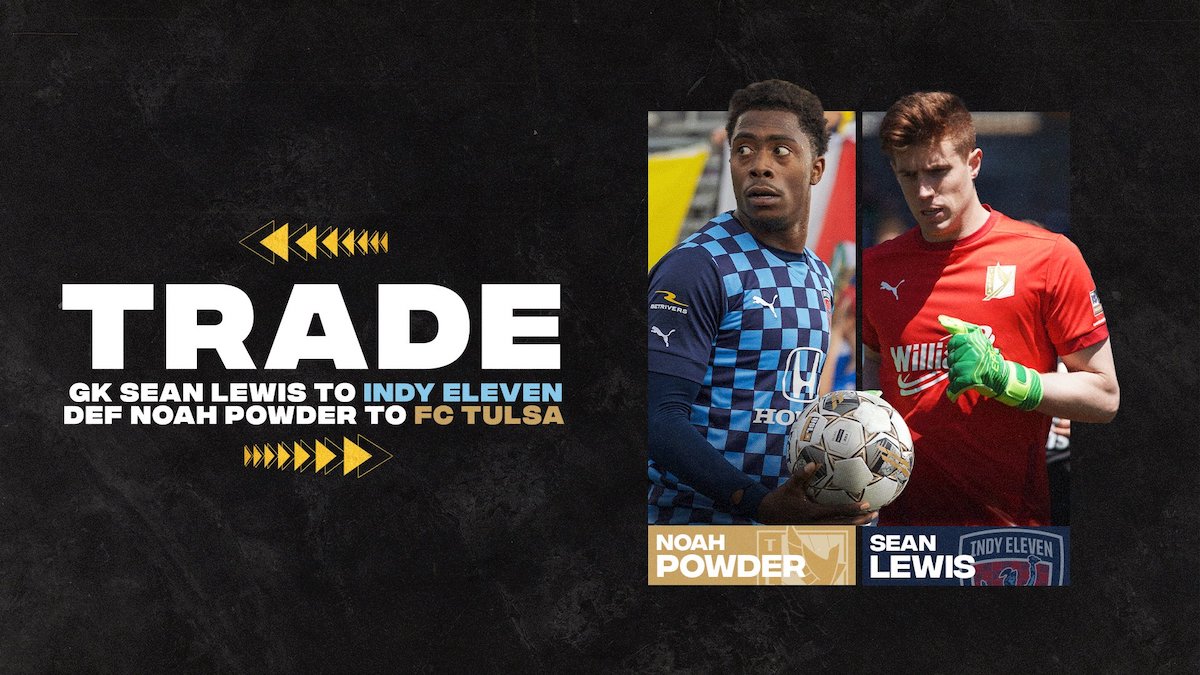 FC Tulsa has finalized a trade to bring in a proven young defender with MLS experience to bolster its backline. The club announced on Tuesday afternoon that it has acquired 2x USL Championship title winner and 2021 Real Salt Lake man Noah Powder from Indy Eleven in exchange for FC Tulsa goalkeeper Sean Lewis, pending league and federation approval.

Powder, a 23-year-old left-back from New Jersey representing Trinidad and Tobago internationally, has already made 115 appearances over his USL Championship career with 12 goals and 10 assists. Last season, Powder was rewarded for his excellent play with a promotion to MLS’ Real Salt Lake where he would go on to make seven appearances in the United States’ top-flight soccer league.

“We’re excited to add someone of Noah’s caliber to our roster at this point in the season,” said FC Tulsa president Sam Doerr. “At just 23 years old, he has already won two USL Championship titles and knows what it takes to win in this league. Our fans will enjoy his attacking style and his pace fits the roster identity we are trying to build at this club.”

Powder kicked off his career by signing with the New York Red Bulls Academy in 2016 and debuted for its USL Championship side as a 17-year-old. A strong defense led Red Bulls II to the best record in the regular season in 2016 and the club would go on to win the USL Championship title the same year, the first title win of Powder’s career. He would ink his first professional contract the following season with Red Bulls II and finish his time in New York with three goals and one assist.

In 2018, the Trinidadian and Tobagonian headed out west and signed with Orange County SC. He scored a regular season career-high three goals for Orange County in 21 appearances with two assists en route to winning the league’s Western Conference. Orange County went on to win its first three playoff matches before losing to Phoenix Rising FC in the Conference Semifinals.

Midway through the 2021 season, Real Monarchs’ MLS parent club, Real Salt Lake, called Powder up to the MLS squad and the left-back made his debut on May 16, 2021. In total, Powder made seven appearances and logged 279 minutes for Real Salt Lake.

Powder signed with Indy Eleven ahead of the 2022 season where he made 12 appearances with one goal and one assist before being acquired by Tulsa.

Internationally, Powder has capped 12 times for the senior Trinidad and Tobago National Team between World Cup Qualifying, the 2021 Gold Cup, Friendlies, and most recently in CONCACAF Nations League B play. Powder started three of Trinidad and Tobago’s four Nations League matches in June, and the “Soca Warriors” won all three. He also made five appearances for the U-17 side and eight more for the U-20 side before getting the call to the senior squad.

In return for Powder, FC Tula will send goalkeeper Sean Lewis to Indy. Lewis was the longest-tenured player on the FC Tulsa roster dating back to Lewis signing with Tulsa as a free agent in 2018. His 61 appearances are tied for eighth all-time in franchise history, and his 189 saves and 10 clean sheets are both second-most in club history among goalkeepers.

“We are thankful to Sean for all he’s done for our club and are excited for him to get the chance to play meaningful minutes with Indy,” said Doerr. “We wish him and his family the best and he will always be part of the FC Tulsa family.”

The move marks the second player-for-player trade in the FC Tulsa era of the club and the third in franchise history.