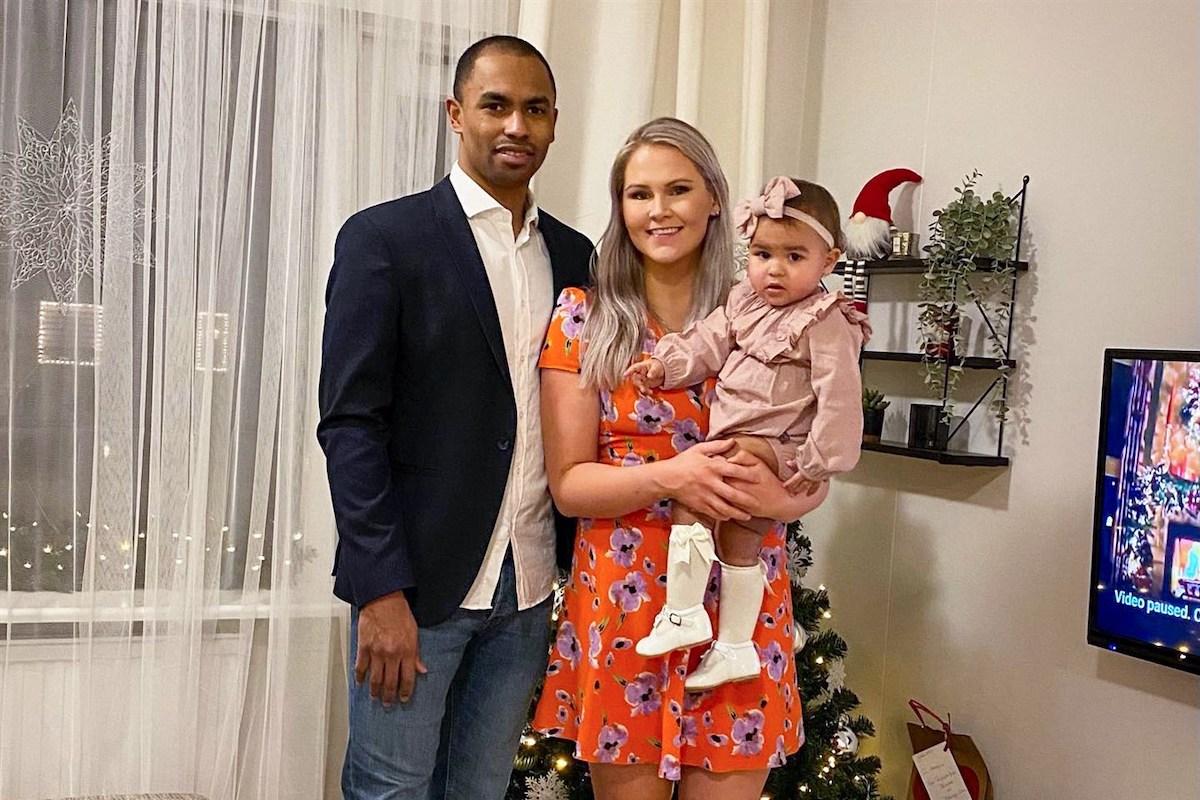 Christmas is an amazing time in Trinidad and Tobago says Jonathan Glenn, who recently took over the position of coach of the women's championship team at Keflavík, but last season he coached the women's championship team at ÍBV. Glenn, who is from Trinidad and Tobago, came to Iceland in 2014 when he joined the Pepsi League team ÍBV - it was Sigurður Ragnar Eyjólfsson who brought Glenn to Eyja, but Sigurður, who is the current coach of Keflavíkur's men's team, was with Eyjaliðið time.

How come you, coming from Trinidad and Tobago, end up in Iceland of all places?

"It's kind of funny because after finishing school in Trinidad [High School], I got a scholarship to go to university in the United States, where I played football and finished my studies. After that, I had the opportunity to play professionally in the United States, where I played for two seasons," says Glenn when Víkurfrétir met him at the office of Keflavík's football department at Sunnubraut. "It's a bit funny, but Siggi Raggi was coaching ÍBV at the time and he was the one who signed me and got me here. I came to ÍBV in 2014 and stayed there for a season and a half, I switched to Breiðablik in the middle of the 2015 season and played with them for two years, but then I went back to the United States." Glenn returned to Iceland in 2018 and then joined Fylki but returned to Eyja a year later.

"I knew then that I would like to turn to training more than I had been training outside the United States. So, in parallel with my last years at ÍBV, I began to acquire UEFA coaching qualifications. It's been a fun journey, but it's very satisfying to have been able to coach from the junior categories up to the championship category, to get to know many interesting people and build relationships," says Jonathan, who is now married to an Icelandic woman, Þórhildi Ólafsdóttir , and together they have one daughter.

"We met when I came here in 2014," recalls Jonathan. "She was a player on the ÍBV women's team and we started talking, went on a date, and then we got married in the United States in 2017. Now we have a beautiful, three-year-old daughter, Amelia Grace."

Þórhildur played with ÍBV last season, so it is not out of the question to ask if she will remain in football.

"She's thinking about it, it's not certain." She played well last summer and enjoyed it, she is not sure if she will continue. It's a bit difficult to have a small child when we are both on the same schedule, away from her all the time. It was easier out in the Islands, where Þórhilda's parents could run around with us. Now we're moving to a new place, she's starting a new kindergarten, and we're thinking about it."

I ask Jonathan if he envisions himself coming to Iceland. Or where are you heading as a coach?

"When you choose to make football your career, you never know where it will take you. Þórhildur and I make our plans, but they are flexible, now we want to enjoy what we have and focus on that - get to know fun and interesting people and continue the football journey."

Trinidad and Tobago was the smallest nation to qualify for the World Cup ... until Iceland beat them to it
Jonathan comes from Trinidad and Tobago, which are islands in the Caribbean Sea, located just off the coast of Venezuela in South America, with about 1.4 million inhabitants. "Most people live on the island of Trinidad, but Tobago, which is a smaller island, can be said to be more of a tourist destination," says Glenn.

Football is a popular sport in Trinidad and many strong players come from there. Football player Dwight Yorke is probably the most famous of them, but he made the park famous with teams such as Manchester United, Aston Villa and Blackburn Rovers.

"Dwight Yorke is a real 'legend,'" says Glenn with a twinkle in his eye. "The school league [High School League] is very strong and it is more popular than the top league, many players from it go on a contract to the United States to study."

Trinidad and Tobago competed in the 2006 World Cup and was then the smallest nation to reach the finals, Iceland took that record from them four years ago.

"After qualifying for the World Cup, I expected football in Trinidad to go up, but it actually went the other way. I think we could have used that opportunity better but I love my country, it's so beautiful – awesome.”

Happy with what he has in hand
Jonathan took over the women's championship team at Keflavík just over a month ago and has only managed to form an opinion on the team. He has already got two players who played with ÍBV last season, Madison Wolfbauer and Latvian international Sandra Voitane.

How do you see the next season?

"I've been with the team for the last three, four weeks and I'm so happy with what I've seen. How they have reacted. I think the atmosphere and attitude of the team is very good, they are willing to put in a lot of effort and want to improve. It makes me very happy and I want to put together a team that Keflvíking can be proud of, a team where all players are ready to give 100% in every game.

For the next season, we will therefore look carefully at how the players fit into the squad and be careful with the selection - I am very happy with the squad I have in hand and only good players who will add to the quality of the squad will be considered," says the coach .

Do you think you will get more players for next season?

"I think we need to be very disciplined and be careful in selecting players, especially given that we don't have the same budget as the big clubs in the league. We need to be nice about the players. We also need to be sensible in how we train, how the players' diet is done and take good care of our bodies. We have to get the best out of each individual, especially given that we probably won't have the widest group. Of course we have to add some players but all these things are important to get the best out of what we have. So we will be competitive in a very strong league next year."

Trinidad and Tobago, a melting pot of different cultures
Jonathan says that society in Trinidad and Tobago is very mixed. This is a very multicultural society, but the vast majority of the inhabitants of the islands are of African or East Indian origin, then Chinese and European origins are also mixed into the mix, and of course indigenous people.

How is Christmas celebrated in Trinidad and Tobago?

"It's such a multinational place, a real melting pot of different cultures," he says. "If we look back a little in history, to the time of slavery, most of the people came from Africa and the East Indies. Each group about forty percent, then there were also Chinese, whites and natives of the islands. So we in Trinidad celebrate everything – everyone celebrates all festivals, whether Hindu, Muslim or Christian.

It is quite unique, but people of these different religions live together in harmony. It respects each other and rejoices together. It was unique to grow up in this place and I think it made it easier for me to adapt to life in other places, like in the United States and here in Iceland. I've traveled to many places with football and my upbringing allows me to appreciate different experiences and cultures - I love getting to know other people's cultures."

Jonathan says that Christmas is an amazing time in Trinidad and Tobago. They are a time of music and parties and are very festive.

"They are different from what is known in this country," he says. "First of all, we celebrate Christmas on Christmas Day and open packages on Christmas morning. On Christmas Eve and well into Christmas Eve, small bands go from house to house and play for people. These musicians need to be welcomed and given food and drink. Then they play and sing for twenty minutes, half an hour before they head next door. They start at midnight and can stay until six or seven in the morning on Christmas Day," says Jonathan with a smile. "So when you wake up in the morning, some stranger may just be sleeping drunken death in your garden." Now Jonathan rolled over with laughter. "It's disgustingly funny."

Jonathan says that these musicians perform Spanish songs and it is a legacy from the time when the Spanish were colonizers in these parts. "This is the only time of the year that Spanish songs are sung in Trinidad."

But here in Iceland, do you celebrate Christmas like every other Icelander?

How do you know Icelandic food?

"I love Icelandic Christmas food, I'm lucky that my wife and her mother are great cooks. Everything they cook; whether it's turkey, roast beef or whatever, I like it," concludes Jonathan Glenn.