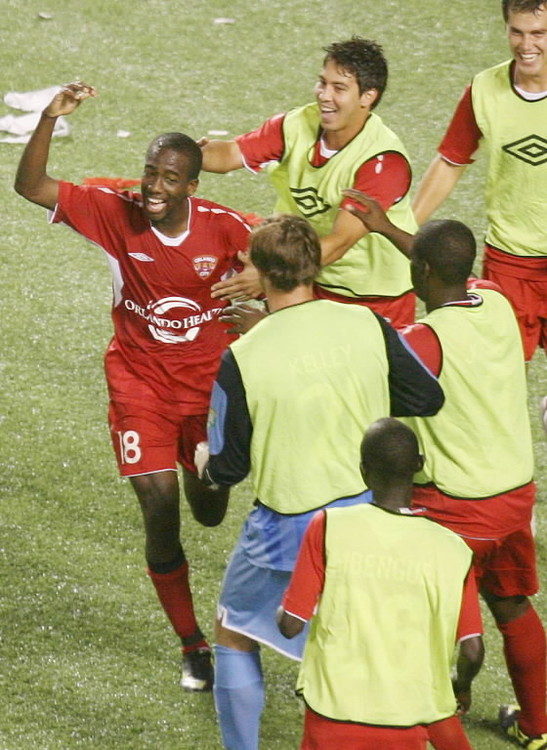 T&T midfielder Kevin Molino was awarded the Most Valuable Player Award by Orlando City at the club’s gala end-of-season awards and dinner at Rosen Plaza, Orlando on Saturday evening.

Molino, in his second season with Orlando, helped the team capture the regular season USL Pro title and they now await their first playoff match on August 31st. The 22-year-old Carenage-born player was elated.

He beat out teammate Dennis Chin, who was the club’s topscorer with 11 goals. Molino had four goals and led the team with eight assists in the regular season.

“It’s been a dream I’ve had from a little guy, to win titles and do well in professional football, and to come to Orlando and win the MVP in my second season is a great feeling,” Molino said. “I know I was having a good season but I didn’t expect the award.

"I want to thank God, as well the head coach Adrian Heath (former Manchester City player and former Sheffield United manager) and the entire staff as well as my teammates, everyone at the club and the supporters for all their support and advice. It’s been a great two years for me at Orlando City.

“We want to achieve great things, so we are focusing on winning the playoffs again this season. I think I’ve kept on developing since I came to City, and now I want to achieve even greater things. It’s not going to come easily but I’m prepared to work hard and go at it.

That’s the key in the football out here,” he added. Molino played all of 90 minutes in T&T’s 2-0 loss to Canada last Wednesday in Fort Lauderdale. He wasn’t too impressed by the result and could not be blamed for feeling disappointed. “I don’t like losing and it’s not any better especially when we lose to a side that I think we’re not supposed to be losing to.

I understand that we haven’t been together for long, but I thought we created some chances and did well in the first half. We passed the ball around okay and we should have taken our chances.

That would have made the game easier for us but then some of the guys started to get tired and we paid for it in the second half.

“I got my first real taste of international football in the last Digicel Caribbean Cup and once I’m available I want to play in all of our matches in this tournament and try to get us into the last phase and see if we can at least get to the final and try and win it.

It’s going to be very hard but we have to give it our best shot. We have to be looking to play in the Gold Cup next year for sure,” Molino ended.