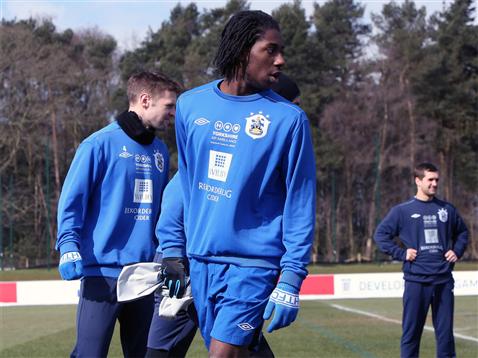 Huddersfield Town has today completed the signing of teenage striker Daniel Carr from Dulwich Hamlet for a small undisclosed fee.

The 18 year-old has netted 24 goals for the Isthmian League Division One South side this season.

Carr was on trial with Liverpool before joining up with Town’s First Team squad for a three day training spell at the National Football Centre, St. George’s Park, ahead of the npower Championship game against Hull City.

He will complete the season at Dulwich Hamlet and has put pen to paper on a two year contract with the Terriers, with the Club having an option on a further year.

“The Club has done really well to get to the front of the queue for Daniel given the level of interest in him, as well as the calibre of interested parties; we have been very proactive in making this deal happen.

“I would also like to thank Dulwich Hamlet and their Manager Gavin Rose for the way they have dealt with this deal.

“Daniel is a goalscorer and has terrific feet; I can see him playing up front and out wide. His task now is to continue his progression and development as a player for the rest of the season and once he joins us in the summer.

“His addition to the squad is in line with the Club’s policy of signing players with potential.”

Daniel was previously at the Reading Academy from 16 to 18 years old during the professional development phase and joined Dulwich Hamlet in September following his release from the Madejski Stadium.

He has also trained with the Trinidad and Tobago Under-20 squad.