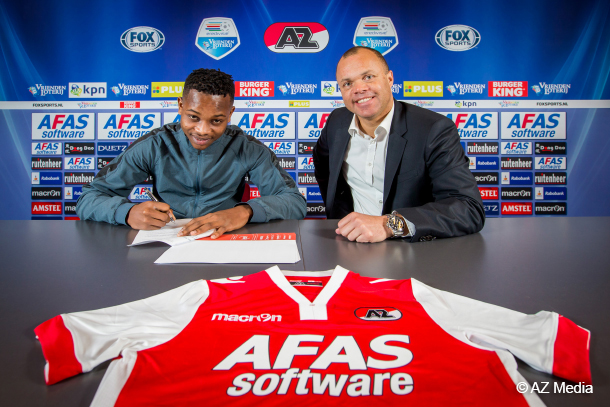 At his official unveiling into the highly competitive Eredivise yesterday, Garcia was displayed by team technical director, Earnie Stewart, who assisted in the youngster penning a three-year deal with an option for a two-year extension. However, the young man will be unable to kick-start his professional career on the European stage until November 20, when he turns 18 years of age.

Speaking after his introduction yesterday, the ex-Central FC player hoped to be an inspiration to other young footballers in Trinidad and Tobago.

“I’m delighted to have signed my first overseas professional contract. It has not been an easy journey but I worked hard and I continued to believe. I want to thank everyone who supported me in Trinidad and Tobago, my family, my friends and my teammates and past coaches. I want to also thank my agent Humphrey Nijman and Dion Sosa for all their efforts and support,” Garcia said.

Former US international Stewart commented on Garcia, saying, “He has great speed, a good understanding and a powerful shot in his left foot. We see him mainly a promise for the future.”

Moving from Central FC to AZ was not a smooth deal, with TTFA general secretary Sheldon Phillips contacting the parties involved and recommending mediation. Garicia’s representatives met with an attorney and came to an agreement which allowed Levi to depart from Central FC.

Presently, AZ Alkmaar sit in fourth position on the Eredivise 2014/ 2015 League Standings. They currently trail league leaders PSV Eindhoven, Ajax and Feyoonard respectively. Once they maintain a position within the top four finishers at the end of the season, Garcia may be able to experience UEFA Champions League football for his debut season.

The young man has already represented top-flight local team T&TEC, played two years of Secondary Schools Football League (SSFL), represented the red, white and black in Under-17 and Under-20 duty and was later signed to Central FC.

Finally, some good news regarding a precocious 17-year-old’s foray into the adult world.

Ravina Rampersad’s brief encounter with Opposition Leader Dr Keith Rowley during San Fernando’s Carnival celebrations has been the talk of the social media this week. But it is a pre-contract deal between 17-year-old Shiva Boys High School Form Five student Levi Garcia and Netherlands top flight club, AZ Alkmaar, which will have the biggest long term impact on national sensibilities.

This afternoon in north Netherlands, Garcia was unveiled at the Eredivise outfit and signed the second professional contract of his young career with AZ technical director Earnie Stewart, who was born in the Netherlands but played international football for the United States.

Garcia cannot begin his professional career in Europe until 20 November 2015 when he turns 18 but AZ did not wait that long to secure his services for the immediate future. The Trinidad and Tobago National Under-20 and Central FC winger is believed to have signed a three-year deal with an option in place for a two-year extension.

“(Garcia) has great speed, a good understanding and a powerful shot in his left foot,” said Stewart, who represented USA at the 1994, 1998 and 2002 World Cups. “Levi arrives in November to AZ, where he first must ease into our culture and way of playing football. We see in him mainly a promise for the future.”

Unsurprisingly, Garcia cannot wait to get started in Europe.

“I am very pleased with this opportunity at AZ,” Garcia told the club’s press officer. “The Netherlands is known as a good country to develop as a talent… I hope to quickly adapt to European football, then I want to be important for AZ.

“In the coming months I’m going hard at work in Trinidad and Tobago, in order to get in shape to Alkmaar.”

Garcia was just 14-years-old when he made his top flight debut in the local Pro League for T&TEC FC alongside elder brothers Brent and Nathaniel Garcia. Financial issues had decimated T&TEC’s roster and then coach Dexter Cyrus had little choice but to turn to youth to finish the season.

He spent the next two years dividing his time between the Secondary Schools Football League (SSFL), Trinidad and Tobago National Under-17 and Under-20 Teams and Super League club Siparia Spurs before he signed professional terms with Central FC in June 2014.

However, before Garcia’s Pro League debut, Dutch agent Humphry Nijman and his local assistant Dion Sosa spotted him during the Under-20 Caribbean Championships in Trinidad last September and successfully wooed the player.

After an initial war of words between Central and Nijman, the two parties came to an agreement late last year, through mediation, which paved the way for Garcia’s impending European move.

“I cannot say too much about the deal because there is a confidentiality clause in place,” Sosa told Wired868. “But they agreed to release him to us and we got him the move to AZ after mediation set up for both parties by TTFA general secretary Sheldon Phillips.

“We came up with a figure for him to buy his contract out and that was how the move was sealed.”

Central managing director Brent Sancho and operations director Kevin Harrison are now Sport Minister and advisor to the Sport Minister respectively and were unavailable for comment.

“Corbin and Levi both did well but Levi was exceptional,” said Sosa. “If Corbin was a little bit stronger they would probably have signed him too but they were a little worried about his durability. We are definitely taking Corbin and Hackshaw back to Belgium this summer.”

Garcia’s move is comparable with Dwight Yorke’s transfer to England top flight club, Aston Villa, at a similar age although Yorke was already a senior international player at the time while the former player has never represented the “Soca Warriors” at senior level.

Garcia showed glimpses of his potential at the National Under-17 level but exploded on the scene in the Under-20 Caribbean Championship. However, his refusal to train with Central thereafter saw a marked drop in his form for the 2015 Under-20 CONCACAF Championships where he started just once and made three substitute appearances in an unsuccessful qualifying campaign.

AZ’s attraction to the player’s ability did not waver, though.

AZ is a club of immense pedigree in the Netherlands although it operates in the shadow of the more famous Ajax Amsterdam and PSV Eidhoven.

The “Cheese Farmers”, as they are nicknamed, won the Dutch top flight league in 2009 led by celebrated coach Louis Van Gaal, who is currently at Manchester United. Up until last year, legendary Dutch striker Marco Van Basten was AZ’s head coach although he was forced to step down for health reasons while other recent bosses include former Holland coach Dick Advocaat and current Southampton manager Ronald Koeman.

AZ’s current coach John Van Den Brom is quickly building a reputation for himself too after leading ADO Den Haag and Vitesse to Europa League spots in the 2010/11 and 2011/12 seasons respectively. The 48-year-old Van Den Brom took over at AZ last September when Van Basten stepped down.

If Garcia makes it on to the field for AZ, he will become the first Trinidad and Tobago player to compete in the Eredivisie since Darryl Roberts played for Sparta Rotterdam in the 2007/08 season.