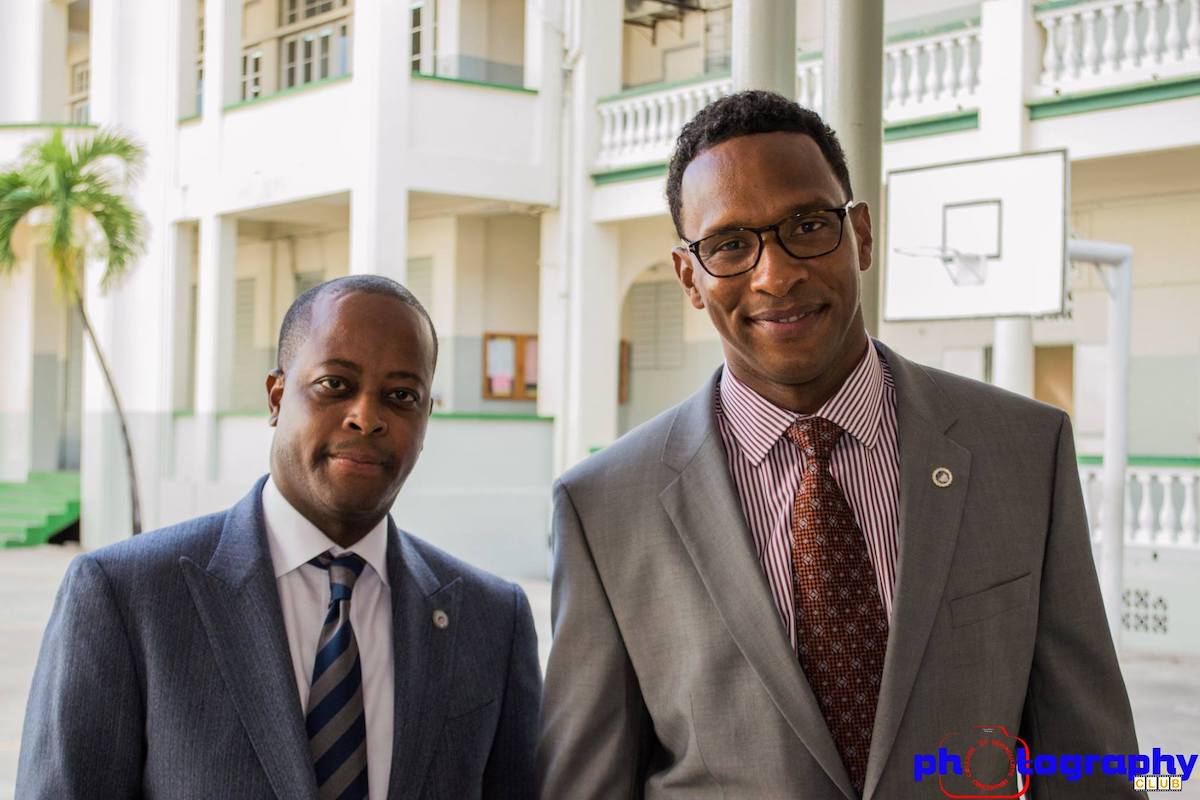 Dr Wayne Frederick and I have been best friends since we were teenagers. The best way I could narrow it down is I was 14 and he was 12 at the time. We just became best friends in CIC and to this day we have no idea why. We were both living in Diamond Vale but that’s all we had in common. He wasn’t a good footballer. He would tell you different but he wasn’t good at all. But we were friends.

To this day, and I say this unapologetically, I had no idea why other than the fact that we were young guys and we were friends. He was small. Wayne suffers with sickle cell so he was always very slight growing up but we just connected and shared dreams. Wayne has gone onto an incredible career himself.

Following our time at CIC I went onto Howard University. He skipped a year so he ended up a year behind me in school and then when he was trying to figure out his own path post St Mary’s College I told him Howard University was the perfect place. As a matter of fact I filled out his application form, paid the application fee and went and submitted it for him to get into Howard.

He came up on an advanced med degree as they call it. So at 16 he was doing both Undergraduate and Med School courses. Then at the time when he became a qualified surgeon, he was the youngest board certified surgeon in US history. So we shared time at Howard University and I then went off to England. He would come to see me play when I first got into the system at Reading FC and when I came back to the States we would catch up. He was a groomsman at my wedding and I was best man at his. We managed to share our successes and always kept in touch and abreast of each other's progress.

Strangely we speak in glowing terms when we have to speak individually about each other but when we are together it’s more difficult because we still act like 12 and 14 year-olds. It's the same to this day when I meet up with up the rest of the boys like Brian (Lara), Dwight (Yorke), Russell (Latapy and Stern John. While we are adults now we still find time to joke around or pull at each other just as we did when we were 12 or 13. It's just worth it being able to loosen the tie a little sometimes. But it’s fun and I think there is a bigger message here and I was actually speaking to Penny Commissiong about this recently. We were speaking about peers and the perception about peer pressure and it being a negative. If peer pressure is a negative or if it isn’t a positive then it’s most likely because you’ve got the wrong peers. So us as peers, we’ve been able to encourage and inspire each other despite our differences.

As I mentioned, we had no idea what brought us together as friends. I was playing sport and he was very bright. I wasn’t that academically accomplished both at my time at CIC and Howard University yet I was able to raise my game academically because of my association with Wayne and that has served me well to this day. I don’t think I could have achieved the things I eventually did academically without him as a friend and I probably couldn’t have achieved the things I did athletically without the likes of Dwight and Russell as my friends in that respect.

As much as I accept that people see my successes and the path I took during the course of my career, and of course the old cliches of me being a local icon or a role model, I just see myself as Shaka Hislop from Diamond Vale. And I made the most of my God-given talents. I made the most of lady luck shining on me and I got some breaks and I made the most of them. But I don’t see myself as being special. The message I’m trying to send here is that you don’t have to see yourself as special to chase those dreams, to have larger than life ambitions and to go after them. You just have to remain focused, have the right people around you and not get distracted. You have to have people who share your ambitions, who share your drive and who will support those dreams.

We can use my example as I did. If you want to become a professional footballer and go onto play in Europe at the highest level, Secondary Schools football is as good a platform or foundation as there is. If you want to go on and become the next breakthrough surgeon, high school in Trinidad and Tobago is as good an academic foundation as any, especially coming from a small country.

Coming from a small country we tend to think that we don’t really  have the right infrastructure, the right support or the foundation that the others do, so therefore, chasing big dreams and big accomplishments is something for the Americans and the Europeans, that it's unique to them, and they are the only ones that have the right to it. And I say that is nonsense. We have all the tools right here in Trinidad and Tobago. It is about how we put our thoughts and abilities together to really endure everything that we will encounter during that journey. It is about pulling everything together and pushing limits in order to achieve what we are capable of.

The Howard University Board of Trustees announced on July 20th, 2020 that it has selected President Wayne A. I. Frederick, M.D., MBA to serve as the distinguished Charles R. Drew Endowed Chair of Surgery.  Dr. Frederick succeeds the late Dr. LaSalle D. Leffall, Jr. as the second person appointed to the prestigious position.

Dr. Wayne A. I. Frederick was appointed the 17th President  of Howard University in 2014. He previously served as provost and chief  academic officer. A distinguished scholar and administrator, Dr.  Frederick has advanced Howard University’s commitment to student  opportunity, academic innovation, public service, and fiscal stability.

Following his post-doctoral research and surgical oncology fellowships  at the University of Texas MD Anderson Cancer Center, Dr. Frederick  began his academic career as associate director of the Cancer Center at  the University of Connecticut. Upon his return to Howard University, his  academic positions included associate dean in the College of Medicine,  division chief in the Department of Surgery, director of the Cancer  Center and deputy provost for Health Sciences.  Dr. Frederick has received various awards honoring his scholarship and service.

Shaka Hislop who wrote this piece for Pushing Limits, is an ESPN Soccer analyst and standout former professional football (soccer) player who, as a dual national citizen, played for both England and his native Trinidad & Tobago, making history as the starting goalkeeper on the T&T national team’s first ever World Cup match in the 2006 FIFA World Cup in the historic 0-0 draw with Sweden in Dortmund. He was also the first member of the Trinidad & Tobago World Cup squad to be inducted into his country’s Sporting Hall of Fame.

Shaka played over 400 games in combined league and national team competition during his 15 year career. The vast majority was in the Premier League as a goalkeeper for Newcastle United, West Ham, Reading and Portsmouth. During his time at Newcastle United the team placed second in the Premier League for two successive seasons under Kevin Keegan’s first tenure. He received a FA Cup runners-up medal with West Ham when they lost to Liverpool in May 2006, less than a month before T&T's 2006 World Cup opener.