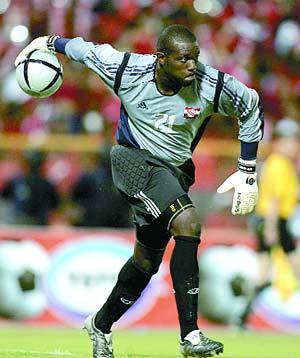 BIG-HEARTED footie stars are set to lead the fi ght against AIDS by giving condoms a trendy makeover.

Research claims condoms are still seen as “uncool” in many countries, including the UK.

But with the help of footie stars fronting adverts in their home countries it is hoped that youngsters will wise up to the benefits of using the contraceptives.

They are aiming to help change the attitudes to condoms in less affluent countries and also want to stop the spread of AIDS and unwanted pregnancies.

It is hoped the brand will spark a new catchphrase “Whatz you Flag?” as a “cooler” way of youngsters bringing up the subject of using condoms, especially young women often pressurised into having unprotected sex.

The company is also marketing HIV-testing kits, with a number of governments keen on taking up both products.

The firm has held recent meetings with chief medical offi cers from a number of countries, including Trinidad and Tobago and are set for more meetings with other countries.

They are also in talks with a Premier League club about a community project and are also hoping to meet Olympic 2012 boss Sebastian Coe and footie chiefs in, South Africa in time for next year’s World Cup to widen the market for the condoms.

“Speaking to a lot of foreign footballers in England, I have realised that they want to give something back, particularly in the countries where they are from.

“Saving lives is the ultimate way of giving something back. There’s so many players who want to take part.”

He added: “Many under-developed countries don’t even have places where condoms can be bought, so under our plan there will be street sellers and condoms will be available in bars, hotels and anywhere where young people will be able to get them easily.”

The company hopes footie stars will front awareness campaigns in their own country.

Kenwyne, 24, is being lined up to promote Flags in Trinidad and Tobago.

He said: “It is important that footballers use their profile to encourage young people to make the right decisions in their lives.

“Young people have to understand that making a wrong decision as a teenager can affect the whole course of their lives.

“That’s why contraception is so important.”

For more details, go to flaghealthcare.com