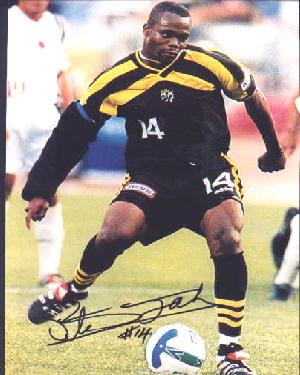 Former Crew striker Stern John recently expressed interest in returning to Columbus at some point in his career although he indicated last month that he'd like to stay in England for another season.

He was in town last week but did not meet with Crew officials. He reportedly was asking some questions about the club and getting a read on what it might be like to play for Robert Warzycha.

John, a free agent, spent the last 10 years in England after scoring a whopping 44 goals in 55 games for the Crew in 1998 and '99. He would likely command a much higher salary than the Crew is currently able to offer although off-loading another six-figure salary might help open enough cap space for the 32-year-old John.

The Crew is on the hunt for a more prolific scorer but it appears a trade of current striker Alejandro Moreno ($137,000) is unlikely.

"We're not going to move (Moreno). He is too important to the team and the locker room," a team source said today.

Stern should be falling over himself to sign a $175,000 dollar contract for four months of soccer with the Crew and to be getting services from Schelotto.

It's probably the best option he has at reviving his career, as I doubt any midfield general type in the Championship is anywhere near Schelotto's level. Or could give John opportunities like Schelotto.

If I was McCullers, I would say, "we'll talk about a contract increase next year, once you prove that you can score goals again."

John has only scored 2 goals in 24 appearances with Bristol City in the last two seasons. Bristol City is a middle of the table Championship side that the Crew could probably compete against.

If Stern is too slow on the uptake to realize that now is his only opportunity to get back with the Crew, then that's his problem. The Crew have said, "hey we are looking for an attacker who can score goals before CONCACAF." Hello? They might already have an attacker John by the time you finish up one more year in England.

It's not like the Crew are going to wait for John to say, "okay, here I am, I'm ready!" Then cut three or four players to make salary room. This is a different MLS then 98 and 99, and John isn't the commodity he used to be.

If John isn't willing to prove himself now for a lesser salary. I would just go the Ekpo route ($118,000) and sign a young Ghana striker (U-23 type) for the $175,000. I think we can all agree (I mean mostly agree as some Crew fans have trouble recognizing talent) that Ekpo has been worth it.

I'm also glad they are holding onto Moreno. A stab at John or someone else may be worth Noonan, who is a bench player. But, not both Noonan and Moreno, no way.

I say if John was enthusiastic about coming to the Crew now for that salary, then okay, let's think about it. But, his recent production doesn't merit the Crew taking a big risk on him. They would be better off perhaps just looking for a younger striker.

According to Shawn Mitchell's blog: