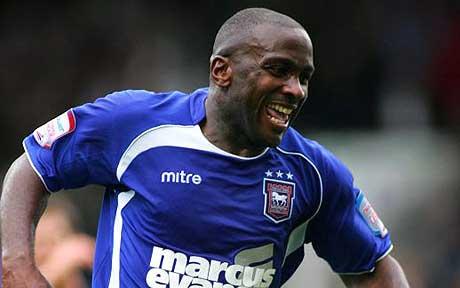 The Blues have been crying out for a 15 to 20-goal a season marksman since the days of Darren Bent, Shefki Kuqi and Marcus Stewart.

And they look to have found one in £750,000 signing Jason Scotland, who notched his fourth goal of the season in Saturday’s 2-1 defeat to Coventry.

The 31-year-old was denied further goals by Sky Blues keeper Keiren Westwood and looks to have regained the confidence and poise that made him a 24-goal-a-season man at Swansea.

Town manager Roy Keane agrees. He said: “Jason scored from what was not even a half chance.

“It was a plus for us from the game and Jason carried a goal threat throughout the match.”

Keane bemoaned another slow start, and said: “I was happy to go in just 1-0 down at the interval.

“After that we did okay but we have to learn how to gain results when not playing at our best.

“I accept we didn’t play well, but we should still have got something out of the game - and that is frustrating.

“We conceded two bad goals and I have no complaints over the penalty decision. It was criminal by us.

“You’re always telling your defenders to stay on the feet.

“When you don’t do that you’re in trouble.

“It’s not all about being a hero and diving in. It’s about using your brain.

“Coventry were direct with two lively players up front and we got stuck between a rock and a hard place not knowing what to do.”

And Keane, who confirmed he took Luke Hyam off at the interval for tactical reasons, added: “We needed to show a bit more quality.

“If we could keep a clean sheet in the second half we knew we were capable of getting one goal.”

And reflecting on the re-signing of Jack Colback, Keane went on: “I had to be paitent, but have wanted Jack back.

“Saturday was too late as the deal was not finalised until Friday evening, but Jack will come into contention for tomorrow’s match at Watford.“

Boss Roy Keane says he will be surprised if four-goal striker Jason Scotland hasn’t scored 15 or 20 times by the end of the season. Scotland has netted a goal every other game in the league for the Blues since moving to Portman Road from Wigan Athletic for £750,000 in August.

Keane is delighted with 31-year-old’s goal tally up to now: “If he keeps that up we’ll be happy, that’s what we’ve brought Jason to the club for.

“I think he could have done with better service and support on Saturday. We’re pleased with Jason and I still think he has a lot further to go on his fitness, which will only come from games.”

The Blues boss says Scotland can come close to repeating the 21 league goals he scored with Swansea in his only other year in the Championship: “I’d be surprised if he doesn’t score 15 or 20 goals this season.

"Sometimes you don’t like putting pressure on players but I think Jason enjoys that. I think if you asked him, he’d be saying ‘yes, that’s what I expect to get’.

“But we have to give him decent service. Some of the service we gave him on Saturday could have been a bit better. Certain players are still learning Jason’s strengths and weaknesses, what kind of balls he likes. He does like balls into feet.

“His goal on Saturday was far from an easy chance and he’s taken it well," Keane added. "But we need other players contributing, whether it’s Tamás, Connor, another striker coming into the club, the widemen, our midfielders or our defenders. Our set pieces were poor on Saturday. We need to do better.”

The Blues boss says the lack of strikes from elsewhere is why he’s now looking at adding a loan striker to his squad: “Jason’s a goal threat but he’s the only goal threat we have at the moment, which is why we’re constantly looking at other players. We’ve got the option of the loan market, one more player, maybe two, we’re always looking at that. Jason needs a hand, we can’t be dependent on one player.

Keane says not too much pressure will be put on Connor Wickham, who is still getting back to his best after his ankle injury: “We’re going easy with Connor. Don’t think Connor Wickham’s going to be starting games in the weeks and months ahead, which is why we’re looking at other options and may be bringing in another striker. We don’t want to make too many demands on him.

“Connor’s 17 years of age and we do have to be careful with him, particularly with him having been away with England for seven or eight days last week. I have to look after all these boys, same with Luke Hyam.”