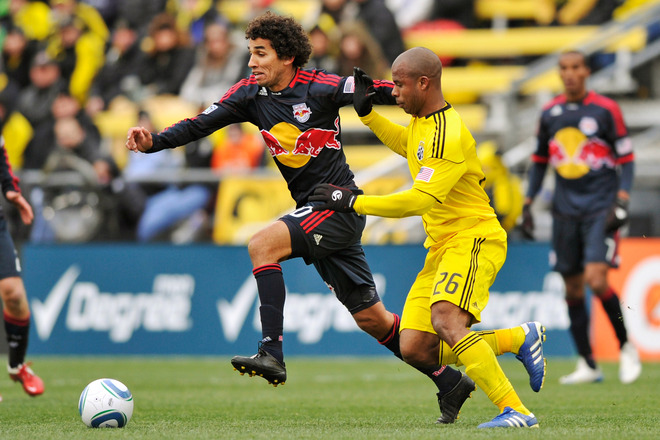 The Columbus Crew announced today that it has signed defender Julius James to a multi-year contract extension. Per club and league policy, no further terms of the deal were disclosed.

A 26-year-old native of Maloney Gardens, Trinidad & Tobago, James is in the midst of his first season with the Crew and has already distinguished himself, having started the club's first 15 games and logged 1,350 minutes.

"I am extremely happy to have the organization have that much confidence and interest in me that I have been asked to re-sign," James said. "I love Columbus, the fans, my teammates and the organization, and I feel it is a blessing that six months ago I was waived by a team and six months later one of the best teams in the league offers me a contract extension."

A product of the University of Connecticut, James was drafted in the first round of the 2008 MLS SuperDraft (No. 9 overall) by Toronto FC. He appeared in 13 matches for Toronto, scoring one goal. At the end of his first MLS season he was traded to the Houston Dynamo in exchange for midfielder Dwayne DeRosario.

After a short loan period at the Minnesota Thunder of the USL First Division, James was traded to D.C. United where he spent part of the 2009 and all of the 2010 seasons. In 2010, he led his defensive teammates in minutes played, with 1,682, while appearing in 22 games and scoring one goal

He was signed by the Crew on February 28, 2011 and played his first game the next night, at Real Salt Lake in the second leg of the CONCACAF Champions League quarterfinal, finding an immediate place in the back four where he remained until suffering an adductor strain that kept him out of the club's last two games.

"We saw something in Julius before we brought him here," said Crew head coach Robert Warzycha. "I think he's a well-proven defender in the league and he obviously blended in very well. We've had some success with him [in the lineup] so it makes sense to keep him longer."

Founded by American sports pioneer Lamar Hunt, the Columbus Crew is Ohio's Major League Soccer club, anchoring a diverse sports and entertainment enterprise. One of the league's Charter Members, it won its first MLS Cup championship in 2008 and has also won the 2002 U.S. Open Cup and MLS Supporters' Shield titles in 2004, 2008 and 2009. It is in its 16th season overall and 13th at first-of-its-kind Crew Stadium.