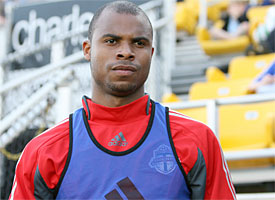 The last time center back Julius James was out of the Crew lineup, manager Robert Warzycha had a natural replacement in Andy Iro, the player who lost his starting job to James in the first place.

But with Iro now at Toronto FC after a trade on July 15, the replacement for the suspended James ahead of this weekend’s match in Seattle won’t be an easy fill.

James and Chad Marshall have been paired for all games, except those on June 26 and July 2 when James was out because of an adductor strain. Their play is a big reason Columbus’ 0.96 goals-against average is the third-lowest in MLS.

“It’s going to be tough without Julius,” Marshall said. “He’s been huge for us. But that being said, we have a very deep team and guys who can play for him.”

Warzycha was not tipping his hand, but rookie Eric Gehrig is a likely candidate. He has started three games in July as a defensive midfielder but played central defense in a friendly vs. Newcastle United on July 26 as well as Sunday in a reserve match against Philadelphia.

“We have good players who can step in,” James said. "I’m not worried."

There are two other intriguing possibilities. Rookie Rich Balchan and Danny O’Rourke are coming off long injury rehabs but they may not be fit to go 90 minutes on Saturday, especially on the unforgiving turf at CenturyLink Field.

Balchan has speed comparable to James, but O’Rourke offers the same experience and bite as James, who is tied for the league lead in fouls committed (44).

“He’s been a rock,” midfielder Kevin Burns said of James. “He and Chad challenge each other so much. It will change things but just like when we lose anyone, other guys have to step up.”

Burns could also play center back in a pinch but he has worked well in the middle with Emmanuel Ekpo the past two games, both wins for the Eastern Conference leaders (11-7-7, 40 points).

As far as James is concerned, caution accumulation points will force him to miss a trip that he desperately wanted to make ahead of his recall to the Trinidad and Tobago national team for World Cup qualifying matches against Bermuda and Barbados in early September.

“I was really looking forward to going to Seattle and playing because as player that’s an atmosphere you want, that feeling of the fans and the hostile situations,” he said. “I kind of cherish those because you get to show your true character and how much you want to fight.”