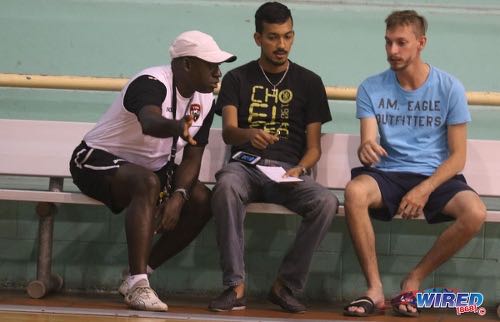 However, technical committee chairman Keith Look Loy suggested Brereton is conflating two separate topics—the TTFA’s appointment of national Futsal coaches; and the operations of FATT—and insisted that Morris remains a national coach and is ‘satisfied’ with his current status.

Brereton noted that the TTFA had not included a single member of the last Futsal team that won bronze at the 2016 Caribbean Championship. On 13 December 2018, the entire Futsal coaching staff and players were awarded a settlement for more than a half million dollars by the High Court for unpaid salaries and stipends due from the local football body, which was then led by former TTFA president David John-Williams.

Brereton, who has worked with the National Futsal team since 2004, suggested that Morris was only given the post of Boys’ National Under-15 Team head coach to appease him.

“It is passing strange that, as a national coach, you win two gold medals in 2004 and 2008 (the team did not participate in 2012) and 2016 you get bronze, you apply for the post of head coach and they turn you down,” said Brereton. “The TTFA has to answer why. Is it that the TTFA has blacklisted us because of the court action?

“They mamaguy Clayton [Morris] as Under-15 assistant coach to take away the Futsal job. My position is Clayton Morris was unfairly treated by this present TTFA.

“[…] Clayton Morris is the only coach in Trinidad and Tobago that coaches Futsal—look at the programme he ran in prisons. So they ran a Futsal coaching course in Trinidad recently but are those fellahs actually coaching Futsal anywhere?!”

Brereton said that, although he could not speak on Morris’ behalf, he felt ‘saddened’ for the former Strike Squad captain and Trinidad and Tobago Hall of Famer.

“I really feel it for Clayton,” he said. “It is not to say he was unsuccessful or he was a bad coach. I don’t know what [the technical committee] said to him but I know he applied and was unsuccessful.”

Did Morris feel he was being unfairly treated? The UTT FC head coach declined comment to Wired868 and claimed that his code of conduct as National Under-15 coach does not permit him to discuss such matters with the media.

However, Look Loy said that, as far as he knew, Morris was fine and happy to work in the capacity decided upon by the technical committee. Further, he said Morris’ past successes did not guarantee continual employment for him or his staff.

“That is like saying Real Madrid can’t fire their coach when they win La Liga,” said Look Loy. “It was the opinion of the technical committee that the new staff is the one they should recommend to the board. Clayton [Morris] has had three tilts at the national job already. He is now on the eleven a side section [and] someone new is being given an opportunity, who is very qualified as a Fifa instructor and Concacaf instructor.

“[…] I have been in regular contact with Clayton and saw him up to yesterday [at the National Under-15 Team training session] and Clayton hasn’t mentioned it at all.”

Look Loy dismissed any inference that Morris’ new post as National Under-15 Team assistant coach was meant to offer a soft landing to the former Futsal head coach.

“It is not linked at all,” said Look Loy. “I had multiple conversations with Clayton and he was quite happy to work with a national youth team and had no demands or requirements about being head coach.

“His attitude—which I give him full credit for—was he was willing to work in any capacity in any job which he was required. I spoke to him just yesterday and he seemed quite happy.”

Much of Brereton’s angst comes from the strained relationship that he and Morris share with interim FATT president Geoffrey Edwards. In October 2015, then TTFA president Raymond Tim Kee appointed an interim Futsal Association headed by Morris and Edwards. However, Morris and Edwards soon fell out and, although Edwards continues to act as president and voted in two TTFA elections, the current Futsal executive members have never faced the polls themselves.

“How come the Futsal Association is allowed to get away without a formal election?” asked Brereton, who said he did not apply for a managerial post within the current set-up as he never saw that job advertised. “On what basis is the Trinidad and Tobago Football Association supporting Futsal? You bring a foreign coach from the United States of America: ent you have to house him, give him a travel allowance or car and pay him in US dollars? What is the cost implications of using a foreigner instead of a local coach?

Look Loy tried to address each of Brereton’s concerns.

First, he was unaware of what advertisements might have been used for managerial positions within the National Futsal team. (The current Futsal team manager, Roberts, is also FATT’s general secretary and one of its two voting delegates.) He admitted that the FATT did indeed recommend Konstin for the top Futsal job but said the final decision was the technical committee’s.

“The Futsal association made recommendations but they still had to be vetted by the technical committee, which we did,” said Look Loy. “They wanted that person and we agreed he was a good choice. Clayton has never worked abroad and he never worked here, except for one stint with the Women’s Under-18 Team [at the 2018 Youth Olympics]. So it is difficult to compare the two.

“[Konstin] has done a lot within US Futsal circles, particularly within youth circles. We thought it would be a good move to bring someone with international experience to bear with the team.

“[…] And just for the information of people who believe he is getting a fantastic price. He is getting no more than [Angus] Eve or [Jason] Spence or other local youth coaches; and he is getting it in local currency too. So he is getting a local salary at a local level.

Look Loy denied that the TTFA offered any surreptitious support to the Futsal Association.

The Futsal Association, he said, is already operating well outside of its ‘interim’ term and that must end soon.

“The TTFA general secretary [Ramesh Ramdhan] has already written to the Futsal Association of Trinidad and Tobago pointing out to them that they were appointed by Raymond Tim Kee as an interim body in October 2015,” said Look Loy. “They went through four years without an election, they have no membership that we know of, and we have never seen any minutes from them.

“If they cannot do that, the TTFA will step in. There are two issues here and they are two different issues that are not even related to each other.

“We are fully aware of the issues within Futsal—and I am might add that the same situation arises with Beach Football. These two situations will be addressed.”

Look Loy said the National Futsal Team will begin screening sessions by next weekend and Konstin is expected to be in the country by then. At present, the technical committee is waiting for the approval of training venues from the Sport Company.

The TTFA then hopes to provide Konstin and his troops with a short camp at the Costa Rica FA’s training centre, prior to their Concacaf competition in May, which will allow them to have four or five warm-up games.

Should finance permit, the TTFA will also bring in a specialist goalkeeper coach from Cuba to work with the team from April.

The Men’s National Under-17 and Under-15 Teams started training on Saturday, headed by Angus Eve and Keith Jeffrey respectively. Due to a shortage of venues because of ongoing works at several national stadia, the Under-17s will operate primarily out of Mucurapo West Secondary with the Under-15s at El Dorado West Secondary.

The Men’s National Under-20 Team, headed by Derek King, should begin training on Wednesday at the Larry Gomes Stadium in Malabar.

There is also a girls training programme in Tobago that is meant to augment the work of the Trinidad-based team.

“We have four Under-17 girls in Tobago who are training under Corbyn Cooper as part of a wider girls programme there,” said Look Loy. “We are doing what we can to ensure they have a fair chance as possible.”

Men’s National Senior Team head coach Terry Fenwick, according to Look Loy, will hand over his own training plans tomorrow.

At present, the TTFA has not stopped national coaches from operating at club level. Eve and Jeffrey, for instance, not only coach two national youth teams but are also involved in the running of Pro League teams Tiger Tanks Club Sando and San Juan Jabloteh respectively from their senior to youth set-ups.

Look Loy said that the technical committee will monitor all staffs to ensure there were no issues as a result.

“I personally made it clear that there is to be no clashing of schedules; and if there is a clash, then the national team comes first,” said Look Loy. “I made it clear to them all and it was agreed. We will monitor to make sure there is no conflict and, if there is, we will resolve it in the TTFA’s favour.”

The following Letter to the Editor criticising the decision of the Trinidad and Tobago Football Association (TTFA) to appoint new staff to the Men’s National Futsal Team was submitted to Wired868 by former team manager Ronald Brereton:

Mr Look Loy must not be allowed to play smart with foolishness.

Bear in mind that two words that were always present in the campaign of the victorious team at the last TTFA Elections were ‘transparency’ and ‘accountability’.

So the technical committee and the TTFA were well aware of these facts, as stated in the very words of Mr Look Loy.

Further, on what basis and authority was FATT allowed to vote in not just one, but two TTFA elections.

Mr Look Loy claims that Clayton Morris is satisfied with his present status as a National Coach. Whereas I cannot speak for Mr Morris nor will I attempt to, I must ask Mr Look Loy: how would you feel if you were in Mr Morris’ position?

If for 16 years you were head coach of a successful national team that gave this country two gold medals and one bronze medal in that time, then to be un-ceremoniously removed without even the benefit of an ‘exit interview’.

We were put out of the team’s hotel in Guatemala in 2008 and put out again in Costa Rica in 2016—not one word of apology from the TTFA. Not one word of thanks to the outgoing technical staff for service rendered to the FUTSAL community and the people of Trinidad and Tobago.

I wonder if Mr Morris was not [mandated] to follow the TTFA’s Code of Conduct for national coaches, what his position on this would be.

So Mr Look Loy it is not two separate issues, it is one major issue, and we intend to hang it around your neck so that it can be displayed at all times on your chest.

In the words of the late comrade Bennett Berkley of the OWTU, this decision of the technical committee and the TTFA is an ‘unfairment’.

Injustice coated in the purest form of honey, coated in the strongest smelling cologne/perfume or fully immersed in faeces, remains injustice.

The decision of the Keith Look Loy-led technical committee and the TTFA regarding the appointment of a 2020 technical staff for the National Men’s FUTSAL Team reeks of injustice and ought to be rescinded or revisited in the least.

Editor’s Note: The two incidents when the National Futsal Team players and staff were expelled from their hotels for non-payment of accommodation fees occurred during the tenure of past presidents Oliver Camps and David John-Williams respectively.

Futsal screening sessions for T&T national men's senior team in preparation for World Cup qualifiers in May 2020. The World Cup will be held in Lithuania from 12th September to the 4th October.