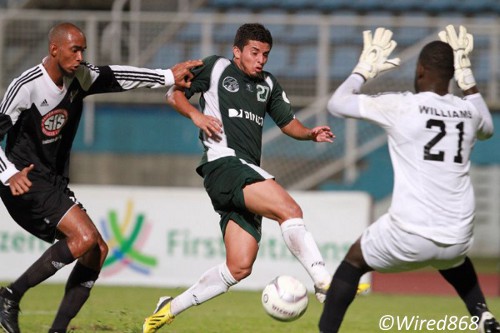 The Final of the 2014 Lucozade Sport Goal Shield (LSGS), which will take place at the Ato Boldon Stadium (ABS) on Friday 25 April, will serve rivalry at its finest, when bitter rivals Central FC and W Connection tackle each other for the main prize.

Central booked its spot into the Final with a comfortable 2-0 win over North East Stars in semi-final one at the ABS on Friday night, while the defending champions and two-time winners (2009 and 2013) W Connection edged tournament debutants Point Fortin Civic 1-0 in semi-final two to set up a second Final meeting against the “Sharks” this season.

However whichever way the LSGS Final goes, the title will return to Couva—the shared home of both clubs. In fact every other title already contested this season have landed in Couva with Connection the Digicel Charity Shield, Toyota Classic and FA Trophy winners, while Central picked up the First Citizens Cup.

A 53rd minute strike by forward Hashim Arcia Friday, off Kurt Frederick’s corner which took a touch off the head of Leslie Joel Russell, broke the deadlock against Civic to give coach Stuart Charles Fevrier the eventual winner over his former player and apprentice, coach Reynold Carrington.

And in the earlier teacher vs apprentice affair, Central head coach Terry Fenwick celebrated an early lead over the Angus Eve coached-Stars before completing the win 11 minutes from time through 20-year-old substitute Rundell Winchester.

The speedy Tobagonian had intercepted a back-pass by Jeromie Williams played towards goalkeeper John in the 79th minute and slipped a low strike, from a tight angle, into the net for a 2-0 cushion.

Before that Central had led the encounter1-0 from as early as the 15th minute when another 20-year-old forward, Dwight Quintero, made use of a rare start since the arrival of Willis Plaza in January, by beating goalkeeper Cleon John to the ball with a toe poke to a perfect Jason Marcano cross.

Quintero, who had his final involvement on the hour mark with a half-volley over-bar, was replaced by Plaza a minute later. While Marcano, who had evaded challenges by Jayson Joseph and Keryn Navarro on the right before sending in the goal-scoring cross, made his best contribution back then.

Two early attempts by Samuel Delice and a swerving Ataullah Guerra free-kick which sailed a foot high of John’s crossbar were other moments for Central.

Stars’ Kennedy Hinkson had a look in on goal two minutes before the break after shuffling away from Guerra, but the hard-working winger’s effort was inches too high of levelling the scores.

The former LSGS winners were even unluckier on the 69th minute after Central goalkeeper Jan-Michael Williams pushed a well-taken Keron Cummings free-kick onto the frame and from the rebound Aquil Selby’s effort crashed off the crossbar.

Then in the 77th minute from an Elijah Manners’ corner, Hinkson’s flicked header towards the near upper corner was headed away by Central substitute Marvin Oliver.

The 38-year-old Oliver and forward Plaza, both key players for Central’s present remarkable form of 9 straight wins in all competitions and an astonishing 16-match undefeated run, were only used as second half substitutes as Fenwick must face the Stars again in a very important Round Three Match Day Seven clash of the Digicel Pro League (DPL) from 8 pm at the Hasely Crawford Stadium on Tuesday.

Plaza, with 10 league goals, has two goals in the LSGS tournament just as Connection’s Arcia.

A win for Central (38 points) on Tuesday against the Stars will slice the lead of longstanding DPL leaders W Connection (45 points) down to 4 points with three games left on the board for both teams.

Fevrier’s side are on the bye on Tuesday, however the Connection head coach entrusted a second string starting line-up, with the exception of regulars Arcia and defender Daneil Cyrus to overcome Civic and reach the LSGS Final.

The “Savonnetta Boys” were denied in the 21st minute when goalkeeper Marvin Phillip kept out Kurt Frederick’s strike, and from a set-piece five minutes into the second period the St. Lucian left-back struck over-bar from 20 yards out.

Long after Arcia’s winner in the 53rd, Connection’s Suriname forward Dimitrie Apai was denied by the crossbar on the 90th minute after picking up the ball inside his own half on a counterattack and outran four Civic players before hitting from inside the area.

Civic meanwhile were closest to the target in the 16th minute when Sylvester Teesdale’s left-footed hook shaved the side netting.

Then a Marcus Joseph overhead attempt off an Andre Toussaint cross in the 26th minute earned him applause from the travelling Point Fortin supporters however his effort failed to trouble goalkeeper Aquelius Sylvester as it sailed high and out of play.

The Civic supporters were cheering again by the 32nd minute when Kariym Balthazar’s strike from above the area flew just wide of the upright and on the hour mark Joseph’s powerful free-kick flashed over-bar.

As for the Final on April 25, it surely wouldn’t lack entertainment against two rivals that have met five times this season.

The “Sharks” defeated the “Savonnetta Boys” 4-2 in a penalty shootout following a goalless draw last October in the semi-final round of the First Citizens Cup en route to lifting the title.

But Connection fired back with a 1-0 round one win in the DPL in December and in the same month defeated Central 6-5 on penalties following a 2-2 draw in the Final of the FA Trophy.

Both sides met again twice this year and after a 2-2 draw in round two of the league, Central slammed Connection 3-0 last month in round three.