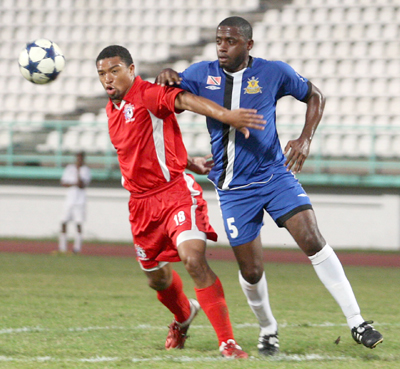 A spirited team performance and a generous slice of good fortune paved the way for the first upset of the First Citizens Cup tonight as the modestly assembled St Ann’s Rangers stunned North East Stars 2-1 in a quarterfinal meeting at the Hasely Crawford Stadium, Port of Spain.

Long-serving Rangers utility player Devon Modeste grabbed the winner in the 70th minute with a goal that epitomised the graft, invention and stubborn resilience of the St Ann’s squad on the night.

As striker Cameron Roget headed across the Stars’ goalmouth, Modeste launched his body towards the ball with leg raised in a kung-fu styled kick. No one else in the penalty area wanted it as badly.

Rangers midfielder Jason Marcano was instrumental in the build-up play for the opener and was probably coach Dean Pacheco’s best player with his tireless running and clever passing.

In another sense, 21-year-old right back Kadeem Drayton—who made his debut tonight—was just as valuable as he provided more cover than Rangers enjoyed in its 2-1 loss to Defence Force last week and allowed Modeste to play higher up the flank.

But there could be little doubt that the game’s most outstanding player wore a Stars shirt.

World Cup 2006 striker Cornell Glen gave a performance that should have delighted the 350-plus supporters and should have been an education for wannabe attackers.
Every ball into Glen, whether in the air or on the ground, stuck to his body like a magnet to a fridge. When defenders got close, he spun them. If they backed off, Glen turned and drove towards them.

Glen scored Stars’ lone goal with a free header—his second item for the season from as many as matches—and should have been awarded a penalty too after being barged over by Elijah Belgrave.

As the final whistle loomed, Glen eluded Rangers captain Mikhail Awai and three more defenders before a last gasp lunge from Marcano, on the edge of the six-yard box, blocked his goalbound effort.

Stars’ coach Angus Eve could console himself with the thought that he should not lose too many games when Glen is in that sort of mood.

Eve might regret his own pre-game contribution to the knock out fixture though.
In a lighthearted exchange at the First Citizens Cup launch, Pro League coaches exchanged verbal barbs and Eve informed the Rangers delegation that: “Allyuh gone already.”

It is uncertain whether his misplaced optimism served as a rallying call to Stars’ opponent. But, collectively, Rangers was almost unrecognizable from the team that was run over by Defence Force last week.

In an open affair, Marcano put Rangers ahead in the 28th minute after Stars failed to deal with a brilliant inswinging corner kick from Christon Thomas. Goalkeeper Cleon John misjudged the flight of the delivery and, although Hector Sam planted his free header off the bar, Marcano was well placed to convert the loose ball.

Jason Marcano had Rangers ahead by the 28th minute, tapping in from close up to beat goalkeeper Cleon John for the 1-0 advantage, as teammate Jamal Jack remained slumped to the ground after hitting his head on the upright in an attempt to score.

Nevertheless Rangers celebrated; Jack returned to full action with little injury, and North East Stars had a game on.

Stars' centre forward Cornell Glen who packed in a solid shift for the Sangre Grande club, leveled the scores 1-1 in the 67th minute.

The former LA Galaxy striker made easy of a left side cross by Kevon Villarael to head past goalkeeper Zane Coker.

Rangers midfielder Devon Modeste had the St. Ann's club in front again by the 70th minute with a 2-1 score.

Modeste raced in at the back post to meet Cameron Roget's header across goal and made no mistake as he flung in to get a shot past goalkeeper John.

Rangers moved into the semi-final round and will meet Defence Force on Friday 28 September. Defence Force rallied to a 3-0 win over Pro League debutants Central FC in their quarterfinal clash at the Manny Ramjohn Stadium with forward Richard Roy bagging two (48th and 70th minutes) and strike partner Devorn Jorlsing adding one in the 90th minute.

At the Hasely Crawford Stadium, North East Stars should have found the net in the 13th minute, however Coker was well poised to make a stop against Kerry Baptiste who latched onto a short pass forward by Glen.

A minute later Modeste unleashed an effort from the right of the box, thanks to a great diagonal ball by Marcano, however it was easily wrapped by John.

Modeste was denied again by John in the 18th minute, canceling out a shot from outside the area.

Modeste was involved again two minutes later, hustling the Stars defense, and somewhat creating an effort by Cameron Roget. But that too was taken easily by John.

Rangers centre back Elijah Belgrave also got on the statistics in the 25th minute with a strike from distance that flew a couple feet wide.

Glen stormed back for Stars, but was inches wide of the upright when he controlled a long forward pass and raced into the area.

The former T&T striker continued to prove too much for the Rangers defense and in the 33rd minute pulled off another effort but was blanked by Coker.

Coker, who helped Caledonia win the First Citizens Cup last season, was fortunate not to concede two minutes before the break as Glen blasted wide with the goalie at his mercy.

Coker's goal was under treat again eleven minutes into the second period when Baptiste's curling effort flew inches past the upper corner.

Baptiste tried his luck again in the 63rd minute, this time from distance, and Coker pulled off an excellent save pushing it behind.

In other results Caledonia scored an early double to defeat T&TEC FC 2-0 in the second quarterfinal at the Hasely Crawford Stadium, and W Connection finished 3-1 on kicks from the mark against Police FC following a goalless draw.

Defending champion Caledonia AIA and six-time winner W Connection are into semi-final round of the First Citizens Cup and would face eachother on Friday 28 September.

While Defence Force, 3-0 winner over Central FC, and St. Ann's Rangers, 2-1 winner against North East Stars, will clash in the other semi-final.

Holder first set up the Edwards' goal after weaving his way around right-back Marc Hunte and his early cross was met perfectly by Edwards who volleyed past goalkeeper Akini Adams for a 1-0 score.

Holder made it 2-0 four minutes later when he guided in a miscued effort by Conrad Smith which flew across the face of goal.

Connection meantime, had to work overtime against Police FC for a 3-1 penalty win at the Mannie Ramjohn Stadium following a goalless match.

But should have wrapped a win in the 85th minute from the penalty spot. Connection were awarded a penalty following a handball inside the area off Rennie Britto free kick however Clyde Leon was denied by goalkeeper Emmanuel Nurse.

Despite celebrating Nurse's shutout, the Lawmen were down to ten men for the final few minutes after Trent Noel picked up a second yellow card during his protest against the penalty call.

Further north, Caledonia seemed settled by its early two-goal margin while T&TEC were fortunate not to concede another item in the 18th minute when Nathan Lewis headed wide after he was found free at the back post by Kareem Joseph’s cross.

T&TEC had rare looks at goal with Javed Mohammed hitting wide from distance in the 49th minute and substitute Kevon Neaves forcing a good save out of goalkeeper Glenroy Samuel in the 76th minute.

Jamaal Shabazz's side was blanked a third item in the 83rd minute when substitute Abdallah Phillips' well struck half volley was wrapped by a fully sprawled Adams.

The 'Electric Boys' then got their best opening during injury time when substitute Simeon Augustus controlled a Bevon Bass cross inside the area and hooked a shot at goal, however Samuel was well positioned to make a comfortable gather.