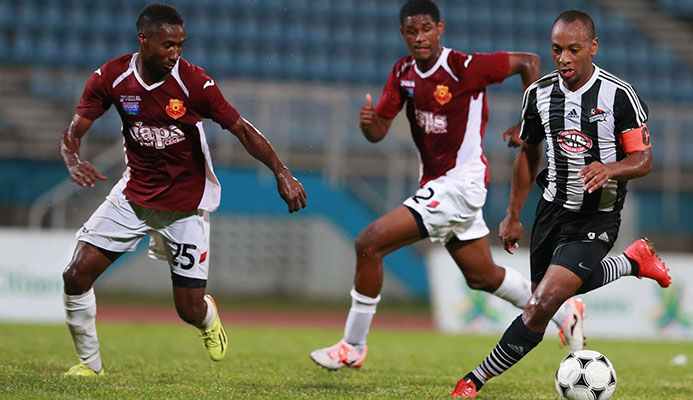 The first is usually special but so was the second after Central FC, led by season-new coach Zoran Vranes, retained its “meaningful” First Citizens Cup (FCC) title on Friday night by edging North East Stars 1-0 in the 2014 Final.

The “Couva Sharks” captain and midfielder Leston Paul grabbed what turned out the winner in the 65th minute, for Vranes' first title in charge, in a Final that could have gone either way at the Ato Boldon Stadium in Couva.

Following a move by Ataullah Guerra in midfield, Paul was played in by the “Soca Warriors” midfielder, and with time and space above the area the Central FC captain sent a low right-footer past a fully sprawled Stars’ goalkeeper Cleon John, hitting the inside of the far upright before the ball made its way into the back of the net.

Paul, a former Trinidad and Tobago Under 17 and Under 20 World Cup captain, had earlier struck wide of the target in the 49th minute and in a stoppage-time counterattack the midfielder sent an effort inches wide of completing a double on the night.

Last season under the then charge of coach Terry Fenwick, Central defeated Defence Force 2-1 to hoist the illustrious title, and in the process the second-season-old club’s first top flight domestic title.

And prior to the start of the 2014 FCC tournament, earlier this month, Central midfielder Sean de Silva said, “We are definitely very eager to defend this title especially being the first one; being very meaningful and very important to the club.”

Talented and experienced Trinidad and Tobago goalkeeper Jan-Michael Williams, who was superb in both penalty shootouts with three saves on both occasions, was eventually named the 2014 FCC Player of the Tournament while new Central head coach Zoran Vranes was named Coach of the Tournament as Central captured the personal accolades including the $100,000 winners’ prize, while North East Stars walked away with the $20,000 runners-up prize.

Vranes’ side had a couple first half free kicks but failed to really trouble Stars’ goalkeeper John, who made a comfortable take on a De Silva kick early on before veteran midfielder-turned-defender Marvin Oliver struck over bar on his dead-ball effort in the 34th minute.

Three minutes later the “Couva Sharks” looked good on a counterattack with forward Dwight Quintero but his attempt to get Paul involved, only forced the momentum into a u-turn allowing the Angus Eve coach-North East Stars to recover.

Central finally forced a save out of John in the 59th minute when a cheeky Oliver flick off a De Silva corner had to be kept out by the Stars’ goalie at near post.

Following the match Central FC goal-scorer, Paul, said his team will celebrate on the night but start over fresh by Saturday, with the season long from over for the defending Lucozade Sport Goal Shield champions and last season’s Digicel Pro League runners-up, having qualified along with league winners W Connection to compete in next year’s Caribbean Club Championship, which also serves as the qualifying stage towards the Concacaf Champions League.

“It was a team effort although I scored the winning goal,” said Paul. “Props to the team. We are deserving of the title.”

“I think it was even throughout the game,” said North East Stars head coach Angus Eve during his post-match comments. “It was a very competitive and tactical game. The difference in the game is that the one chance they (Central) got, they took it, and we had several chances which we didn’t take.”

The “Grande Stars”, backed by their travelling posse and rhythm section nestled among the hundreds of spectators, including Central supporters and rhythm section, that turned up for the event, had an great opening in the 63rd minute however forward Tyrone Charles, with Kennedy Hinkson available inside the area, opted to go for goal himself and was denied by Williams.

Williams’ goal was under threat again in the 76th minute but midfielder Keron Cummings spilled his effort high over bar after slipping in the Central area.

And in the final minute of regular time, hardworking Hinkson miscued inside the six-yard area as he too failed to rescue the Sangre Grande club with a late equaliser.

Hinkson was involved again in the dying moments when his dangerous cross from the right forced a push behind by Williams and following the resulting corner, Central were lucky to see Hinkson's deflected effort fly wide.

“I am disappointed by the final result and not winning the title because we prepared well for the Final,” continued Eve. “We matched them (Central) and I don’t think Cleon John had three saves to make in the entire game. I thought we had the better chances. The play on the pitch was probably even but we created better chances. The difference in the game was we lacked composure in front of goal.”

Eve, a former T&T international, said, had his team won the First Citizens Cup, it might have done a lot for the confidence of the younger players in his squad, which is made up of both youth and experience, towards the rest of the season.

North East Stars and Central FC will both return to action in the 2014-2015 Digicel Pro League on Tuesday 4 November in Round One Match Day Four.

North East Stars will take on San Juan Jabloteh from 8 pm at the Marvin Lee Stadium following a 6 pm meet between Defence Force and Caledonia at the Macoya venue, while Point Fortin Civic sits out on the bye.