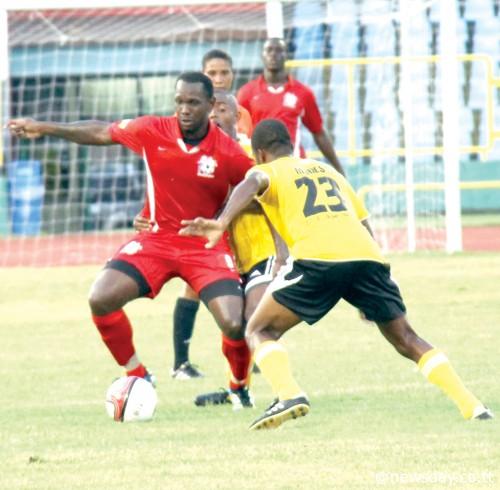 T&TEC FC and St. Ann’s Rangers settled for a point each on Friday night at the Hasely Crawford Stadium in their 2011 First Citizens Cup Group A clash following a goalless draw.

T&TEC had the best efforts of a very quiet opening period when in the 38th minute Kevon Neaves fired wide from distance and seconds later Vurlon Mills pounced on a flop in defence by Rangers, however his low leftfooted strike whisked past goalkeeper Shane Mattis’ far upright.

T&TEC created a few openings before the break which were let down by poor final decisions and touches with both teams unable to break the deadlock.

Following the break T&T Coach Dexter Cyrus made a change in midfield replacing Vurlon Mills with Marcus Joseph while opposite coach Anthony Streete stuck with his starting line-up.

Rangers were on the defensive again in the 52nd minute in a play which ended with striker Furguson flicking a tame header overbar off Romauld Aguillera’s lofted pass in the area.

Shaquille Nesbitte, the liveliest of Rangers players took it upon himself in the 58th minute when he took on defender Kern Peters before hitting a low shot against Clayton Ince, who had enough time to get down and palm away the tame effort out for a corner.

Nesbitte had another tame effort in the 68th minute heading wide of the upright in an unmarked position inside the six yard area when he was picked out by Trent Noel’s freekick from the left.

The teenager was at it again in the 76th minute, putting goalkeeper Ince to work—rooting out a low shot from distance although it lacked strength.

Even though T&TEC held the edge on attacks, it was not until the 83rd minute substitute Andrei Pacheco had the Cyrus coached team’s first shot on target with a blistering freekick from around 35 yards out which was evenly measured by goalkeeper Sylvester, pushing it behind for a corner.

On the other end, goalkeeper Ince needed some strapping on his shoulder after Rangers’ substitute Keon Trim collided with the ‘big man’ as both players contested a teasing Devon Modeste.

And in the 97th minute of additional time, T&TEC had the last attempt on goal when substitute Jamal Ayres headed wide off Pacheco’s corner, ending the Group A clash goalless.

T&TEC will meet Adam’s Construction San Juan Jabloteh on Tuesday from 5pm at the same Hasely Crawford Stadium in their second and final Group match, while Rangers will take on Jabloteh three days later (Friday) from 5pm at the Mucurapo venue.

Connection start in style with 4-2 win over Caledonia.

Hughtun Hector scored on either side of the half, while teenagers Shahdon Winchester and Jerrel Britto notched an item each to hand six-time First Citizens Cup winners W Connection a 4-2 Group B victory on Friday night at the Hasely Crawford Stadium.

Connection next faces DIRECTV North East Stars from 7pm on Tuesday at the same Hasely Crawford venue in its final group match.

Group B comprises W Connection, North East Stars and Caledonia with the top two teams advancing into the semi-final round of the 2011 First Citizens Cup.

T&TEC and Rangers played to a goalless draw in the earlier clash of quarterfinal round day one.

But in the second clash between a very youthful Connection and a well balanced mixture at Caledonia, fans got a total of six goals, not forgetting entertaining football from the first whistle.

Five minutes into the match Caledonia had a shot overbar and in the 13th minute midfielder Micah Lewis forced a save out of goalkeeper Aquilius Sylvester.

It wasn’t long after when in the 25th minute Caledonia’s latest signing Jamal Gay opened his account on debut for the Jamaal Shabazz coached side.

An intelligent run by the forward met Densill Theobald’s forward pass breaking the offside before beating Sylvester for the 1-0 advantage.

However that advantage didn’t last long, when two minutes later Shahdon Wincester levelled the scores 1-1 guiding in a rebound from inside the six yard area, after goalkeeper Kevin Graham made a block on Hughtun Hector’s blistering freekick from outside the area.

Connection then took the lead on the half hour mark when Hector blasted in a low shot from wide of the area at an angle on the right, beating the gloves of Graham and into the back of the net for a 2-1 advantage.

Jerrel Britto then made it 3-1 by the 33rd minute, blasting a low shot from a similar position to that of Hector’s item, as Connection enjoyed a healthy advantage.

In the 44th minute, Caledonia goalscorer Gay lunged in following a mix up by the Connection defence, only to poke his effort just wide of Sylvester’s upright.

Five minutes after the break Britto was inches wide of his second after breaking the offside trap, cutting inside of goalkeeper Graham and curling a leftfooted shot just wide of the far upright.

And in the 54th minute goalkeeper Graham had to cut out a shot by Winchester as Connection pressed for further goals.

Persistence paid off in the 77th minute when Hector completed his double with another magnificent strike from distance finishing in the roof of the net against a hapless Graham for a 4-1 score.

Stuart Charles Fevrier then added veteran defender Elijah Joseph to manage the back, however things weren’t tight enough as Caledonia pulled a goal back through substitute attacker Trevin Caesar in the 90th minute for a 4-2 finish in favour of Connection.