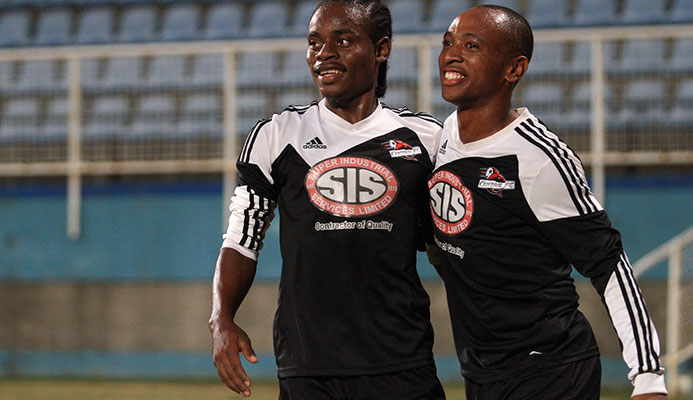 Central FC renewed their bid to retain the Digicel Pro League crown with a 3-0 win over 10-man Morvant Caledonia United on Tuesday night to go four points clear at the top after challengers W Connection were edged 1-0 by San Juan Jabloteh.

Jabloteh, chasing a top-two finish this season to secure a Concacaf Champions League qualifying spot, can now eye the league crown from the view in second position with 45 points thanks to an 86th-minute Tyrone Charles goal against the “Savonetta Boys” at the Ato Boldon Stadium.

But it will be a hard climb for coach Keith Jeffrey's “San Juan Kings” with three games left in the title race and Central on 49 points with a game in hand, not forgetting Connection and Defence Force are still within striking distance for a top-two finish with 43 and 42 points in third and fourth, respectively.

Defence Force, like Connection, also suffered a 1-0 loss to slip a spot as fifth-positioned North East Stars (41 points) celebrated their sixth straight league win under coach Ross Russell thanks to a first half strike from in-form forward Kerry Baptiste in the first game of a double-header at the Hasely Crawford Stadium.

Baptiste beat goalkeeper Sheldon Clarke from close up with a half volley, after the Army defence failed to clear on a free-kick sent into the area, for his eight league goal from six games since returning to the Stars in the January/February transfer window.

Defence Force dominated the second half but former target, goalkeeper Glenroy Samuel, stood unbeatable between the sticks for the Stars.

In the second game of the Port-of-Spain double-header, Central entered on a two-game league losing spell – which ended a 15-game unbeaten run in all competitions – as well as last Friday's disappointing semi-final round loss to Connection in the Lucozade Sport Goal Shield, and were determined to ditch their recent form.

But it wasn't until Caledonia, Sunday's finalist against Connection in the title game of the 2016 Lucozade Sport Goal Shield, were reduced to 10 men early in the second half, that the “Couva Sharks” proved superior to their opponents.

Marcus Joseph, Darren Mitchell and substitute Nicholas Dillon were all on target in the second half to return Central to winning ways.

Caledonia defender Ranaldo Bailey saw red two minutes into the second half following his second yellow card of the game for a foul on Central forward Marcus Joseph near the side line.

Joseph later put Central in front 1-0 with his 14th league goal this season when he beat goalkeeper Phillip on 66 minutes after a couple exchanges with Jason Marcano to shred the Caledonia defence apart.

Phillip, who earlier produced three excellent saves to deny Central forward Ricardo John, was beaten a second time when Darren Mitchell blasted into his far netting for the 2-0 "Couva Sharks" lead in the 80th minute.

Eight minutes earlier John, who headed wide on the “Sharks”’ best first half chance in the 20th minute off a Kevon Villaroel cross, spilled overbar off his thigh at the goalmouth before being replaced by Kadeem Corbin.

However it was an earlier substitute Nicholas Dillon who grabbed Central's third item to complete the 3-0 win.

Dillon headed powerfully past Phillip after Corbin headed on a Villaroel cross.

Police forward Makesi Lewis took his tally at the top of the league scorers list this season to 20 goals, completing a double with a go-head goal on 58 minutes before Dylon King completed the “Lawmen” victory in the 90th minute.

Sando had equalised on three occasions, prior, with forward Devon Modeste netting twice and Shaquille Holder once in a see-saw contest that also had Police forwards Kareem Freitas and Keon Wilson on the scoresheet.

Action continues today (Wednesday) with St. Ann's Rangers against Point Fortin Civic in a bottom-of-the-table clash at the Larry Gomes Stadium from 4pm.