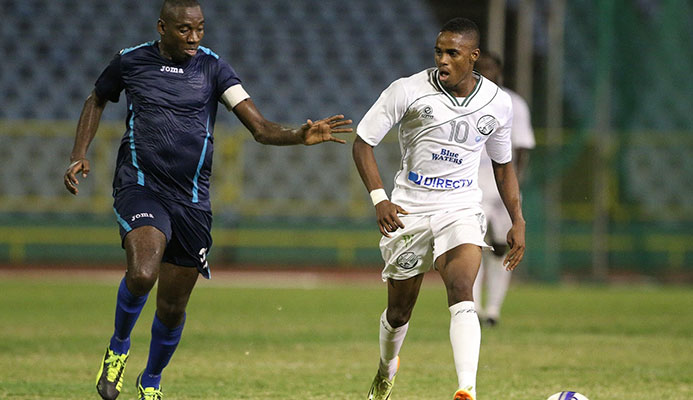 Stars? Who? Todd Ryan scored twice to lead Police FC to a comprehensive 5-1 come-from-behind hammering of Ma Pau Stars on Tuesday in their opening match of the 2016/17 Digicel Pro League.

New signing Jerrel Britto opened the scoring in the 12th minute and looked to have set the star-studded Ma Pau—boasting the likes of Carlos Edwards and Jason Scotland among others—on course for victory in the opening game of a double-header at the Hasely Crawford Stadium in Port-of-Spain.

However Police veteran midfielder and skipper, Ryan, fired back with a double in a space of three minutes to pace Police, who got further goals from Jameel Perry, Christon Thomas and substitute Keon Wilson, to start at the top of the league standings this season.

Darren Mitchell, donning the captain’s armband, fired the Couva Sharks 1-0 ahead four minutes from the half. Forward Marcus Joseph enjoyed child’s play against Connection defender Alvin Jones before picking out Mitchell who beat a hapless goalkeeper Terrence Lewis from the centre of the area.

It was not until the 84th minute that the somewhat scrappy affair—as Central and Connection seemed unable to shake off last week’s away defeats in the Concacaf Champions League against Vancouver Whitecaps (4-1) and Honduras Progreso (1-0), respectively—produced another goal.

Connection substitute forward Jamal Charles completed a sublime move by the Savonetta Boys, involving a neat flick into the area and headed assist by substitute Aikim Andrews and Andre Toussaint, respectively, with a goal. The Grenada international headed over an advancing goalkeeper Javon Sample to level the scores at 1-1.

But in the third of four minutes stoppage-time Leston Paul grabbed the 2-1 winner. Paul ran unchallenged for almost 15 yards before hitting to the left of Lewis and into the bottom corner from the edge of the area after Joseph had attracted the attention of a handful of Connection players on the right before finding Paul in the middle.

Elsewhere, last season’s league runners-up San Juan Jabloteh secured a 1-0 win over Club Sando after no goals were scored during the remaining 42 minutes of last week’s abandoned match—due to no lights—which was completed on Tuesday at the same Mahaica Oval in Point Fortin.

However there wasn’t a shortage of goals in north Trinidad thanks to a brilliant showing by the Richard Hood coached-Police FC without ace scorer Makesi Lewis, broken leg, and first choice goalkeeper Adrian Foncette currently with the Trinidad and Tobago national team for Caribbean Cup qualifiers.

Despite going under early on after Jerrel Britto’s superb strike found the far bottom corner of goalkeeper Theon Browne’s net, the Lawmen were on fire against Ma Pau Stars.

Todd Ryan smashed in the equaliser (1-1) in the 22nd minute from close range after a poorly executed clearance off a Police corner put Stars’ goalkeeper Glenroy Samuel in danger. Samuel, who was lucky not to concede less than 15 seconds into the contest after smashing a clearance attempt into Police forward Jameel Perry near the goalmouth, wasn’t as fortunate after he was only able to clear the high ball as far as Ryan who welcomed the opportunity with venom.

Ma Pau’s trouble doubled by the 24th-minute when Ryan converted from the spot to give Police a 2-1 advantage after Perry was brought down inside the area by defender Glenton Wolfe.

Perry, who failed to produce the goods earlier from two right side Kareem Freitas crosses, redeemed himself in the 38th minute by hitting past Samuel from another Freitas feed for a 3-1 Police lead.

Four minutes into the second half and Police were leading 4-1 when midfielder Christon Thomas unleashed a right-footer past Samuel.

And suddenly there was no coming back for Ma Pau whose closest to a second item arrived in the 82nd minute when Hakim Baird’s free kick—one resembling that of Ronaldinho’s infamous 2002 World Cup goal against England—deceived goalkeeper Brown and clipped the top of the Police crossbar.

Kerry Daniel, who was released on the left by substitute Scotland, had the best open play effort for Ma Pau seven minutes from the half, hitting just wide of the far bottom corner after seeing off a challenge by Ryan inside the area.

But it was finally over for Ma Pau after substitute Keon Wilson rounded off the 5-1 Police win in the 89th minute. Wilson executed a cool finish beyond Samuel off a feed by substitute Micah Lewis, who, nine minutes earlier watched on as his effort was miraculously kept out at the goalmouth by Ma Pau’s Keryn Navarro.

Police will return to play on Tuesday October 11 against W Connection while Ma Pau Stars will try to rebound at Point Fortin Civic on Friday October 7. (See full upcoming schedule below.)

Club Sando 0 vs San Juan Jabloteh 1 (Keston Julien 14’), at Mahaica Oval.
(Remaining 42 minutes were played on Tuesday after no lights forced the abandonment of the game last Friday.)