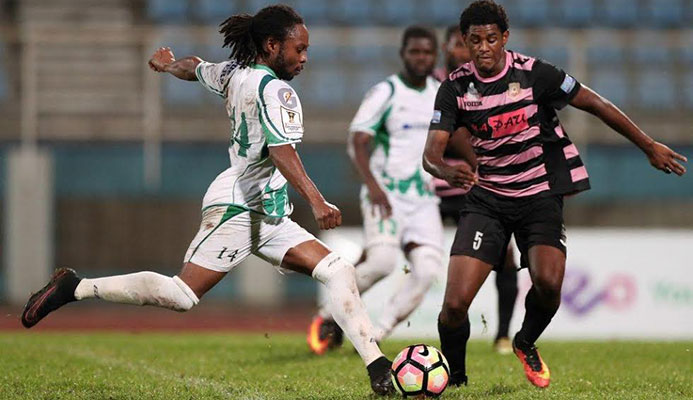 W Connection moved to the top of the Digicel Pro League standings with a comfortable 3-1 win over Courts Morvant Caledonia United when league play resumed on Friday with a double-header at Naparima College Ground in San Fernando.

Overlooked Trinidad and Tobago internationals Andre Toussaint and Hughtun Hector, and Dominica’s Briel Thomas, all scored in the first half to guide the Stuart Charles Fevrier coached-Connection to their fourth consecutive league win.

Two-time defending league champions, Central FC, also on 16 points, but now second to Connection’s superior goal-difference, can retain the lead when they take on bottom-placed Point Fortin Civic from 6:30pm today (Saturday) in the second game of a double-header at the Mahaica Oval, while third-placed San Juan Jabloteh, on 15 points, welcome St. Ann’s Rangers from 4pm in Barataria on Sunday.

Club Sando, playing at home for the first time since joining the PL in 2015, snapped a three-game winless run in all competitions with a 2-1 win over Police FC in the second game of the Naparima College Ground double-header.

Akeem Humphrey snatched the winner in the 64th-minute to earn the Angus Eve-coached Sando their second league win of the 2016-2017 campaign to hurdle First Citizens Cup 2016 semi-finalists Police and Morvant Caledonia to occupy sixth position with 7 points.

Kevon Piper had given Sando a 17th-minute lead against the run of play, hitting into a vacant net on a rebound after a Keithy Simpson attempt crashed off goalkeeper Adrian Foncette’s crossbar.

But Police equalised three minutes from the half when defender Dexter Alleyne headed past Kelvin Henry from close up after the Sando ‘keeper had flung himself to keep out an initial attempt from Todd Ryan off a Kenaz Williams cross.

However, after absorbing numerous raids by Police on a muddy but grass covered surface, the hosts were back in front following a sublime Humphrey item. Set free on goal by a Piper pass from the middle, Humphrey raced into the area and touched the ball beyond an advancing Foncette before hitting into the open net for what turned out the Sando winner and Police’s fifth consecutive league loss.

Coach Richard Hood’s Lawmen did come close to finding a second equaliser on two occasions fifteen minutes from time. But Henry was brilliant in putting behind a Ryan free-kick before Alleyne headed wide from the resulting corner.

Earlier Connection, who were ousted in the First Citizens Cup quarters last weekend, got off to a flyer when Toussaint slid in to fire the Savonetta Boys ahead with a third-minute goal. The veteran attacker met a low Dimitrie Apai cross to beat Morvant Caledonia goalkeeper Stephon Seepersad for his fourth league goal this season.

Then on 27 minutes Hector, who was denied earlier by Seepersad, doubled Connection’s lead with a composed finish in a one-on-one with the goalie following a breakaway move Aikim Andrews.

Hector returned the favour on the half hour mark but Andrews attempt was denied by the bar and the follow-up strike by Toussaint was kept out at the line by Seepersad.

But Seepersad was hung out to dry again by his defence and Briel Thomas smashed in Connection’s third goal a minute before the break after Morvant Caledonia failed to clear on a corner kick.

Morvant Caledonia, who are now winless in six straight league appearances, did, however, find a consolation item in the 90th-minute though defender Seon Thomas, who smashed his effort beyond Connection goalie Terrence Lewis.