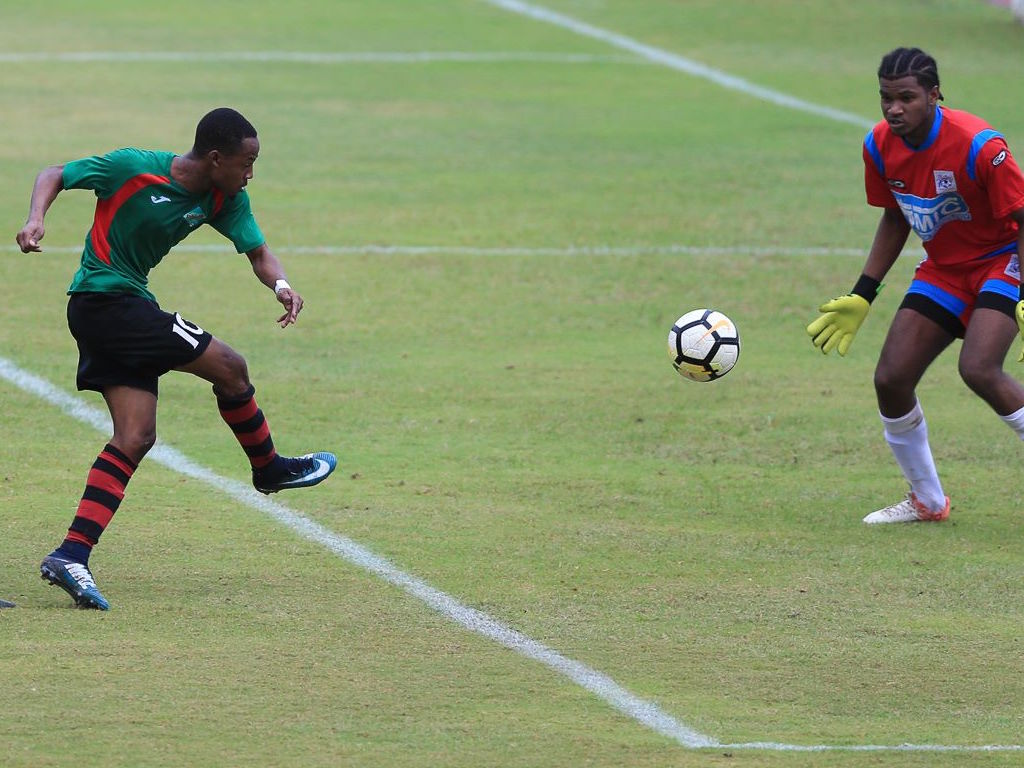 Jomoul Francois netted an early brace against Central FC as the Couva Sharks felt the aftershocks of a 6.8 magnitude earthquake that earlier rocked the twin-island republic, losing 3-0 against San Juan Jabloteh in the first game of a double-header at the Ato Boldon Stadium.

The result, which was completed by a goal from Dellon Jagessar, temporarily lifted the Keith Jeffrey-coached Jabloteh (10 points) top of the 2018 Pro League standings before W Connection (12 points), 6-1 winners over Central on Saturday, defeated Club Sando 2-0 in the second game to return to the summit with a fourth straight league win from as many outings this term.

Marcus Joseph, fresh off a hat-trick against the Couva Sharks, broke the deadlock for Connection against Sando (4 points) on 56 minutes with his 13th goal of the season in all competitions before Kadeem Corbin, ten minutes later, celebrated his second league goal for the Savonetta Boys to complete the scoring.

Central (4 points), meanwhile, unable to rebound from the Saturday’s Couva Clasico defeat, conceded their second consecutive defeat and are now three straight games without a win under caretaker coach Walt Noreiga who has assumed the role in absence of head coach Stern John who has been in England over the past weeks.

Francois, who scored the winner in a 2-1 win over Police FC last Saturday, fired Jabloteh in front in the 9th minute after pouncing on a defensive error to beat a hapless Central goalie, Marvin Phillip. The diminutive forward then lashed home his second six minutes later to cushion the San Juan Kings 2-0 after a solo run from the right and into the area to hit the far bottom corner of Phillip’s goal.

Winger Sean Bonval then rocked the Couva Sharks’ crossbar in the 27th minute with a wonderful curling attempt from the top of the box.

Duane Muckette had Central’s best opening of the first half in the 37th minute with goalkeeper Shemel Louison – who was replaced at the restart by Christopher Biggette – at his mercy, but in a strange twist the attacker played a pass to midfield partner Keron Cummings on the left of the area and allowing the Jabloteh to avert danger.

Muckette threatened again in the 50th minute with a header off a cross from striker Jamal Gay.

But three minutes later Dellon Jagessar celebrated his first Jabloteh goal to put the San Juan Kings in a comfortable 3-0 lead and the match out of Central’s reach with a diving header from inside the six yard area after Couva Sharks failed to clear on a corner swung in from the right.

Former Central star Jason Marcano who recently returned to Jabloteh, linking up with his younger brother and captain Elton John, was denied by Phillip who put the midfielder’s powerful attempt from the right overbar in the 63rd minute.

Sando, in the second game at the Couva venue, avoided the same score-line but not their first league defeat of the campaign.

Marcus Joseph towered in the Sando six yard area to head past goalkeeper Kelvin Henry off a right side Triston Hodge cross 11 minutes into the second period, before Corbin, in the 66th minute, controlled an Isaiah Garcia cross superbly off his chest at the back post to volley powerfully for Connection’s second goal.

Joseph, who headed a cross from substitute Daniel Diaz towards goal, was denied a second by the upright in the 79th minute, and a minute from time substitute Kennedy Hinkson lifted a low cross from Diaz overbar at the goalmouth as Sando escaped a third once more.

Fixtures in the Trinidad and Tobago top flight, however, didn’t escape Tuesday’s earthquake that rocked the twin-island republic for almost two minutes just after the stroke of 5:31pm, causing damage to personal property and businesses, even causing power outages as was the case at the Hasely Crawford Stadium which was scheduled to host a “battle of the armed forces” Defence Force FC vs Police FC from 7pm.

As a result, Defence Force and Police will now meet in the second game of a double-header at the Hasely Crawford Stadium on Wednesday 22 August from 8pm following a clash between Morvant Caledonia United and North East Stars from 6pm.